A conference taking place today in the Department of Anglo-Saxon, Norse and Celtic is the first step in an ambitious graduate-led project to create an online database of the diverse and often confounding miracle accounts which abound in the vast body of saintly literature produced by medieval authors.

The layered stories of saints’ acts served multiple purposes in medieval communities, from regulating orthodox religious behaviour to explaining the otherwise unexplainable in the natural world.

The work of the medieval saint often began even before birth; the earliest text telling the life story of 6th-century Gildas has him making important pronouncements from the safety of his mother’s womb.  Even after death, patron saints were portrayed in the exercise of astonishing powers. The author of the vernacular Irish text which recounts the life of Saint Bairre of Cork sees the saint resurrect a king’s dead wife by bathing her. The Welsh saint, Beino, is recorded as reducing a recalcitrant king to a pool of water, by force of words alone, a feat worthy of Game of Thrones. 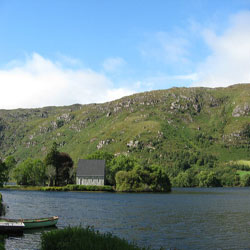 A conference taking place today in the Department of Anglo-Saxon, Norse and Celtic will see the launch of a project to categorise and chart the thousands of miracle stories recorded about saints of the British Isles between 500 and 1300.  The meeting, Mapping the Miraculous: Hagiographical Motifs and the Medieval World, has been organised by three graduate students at Cambridge - Robert Gallagher, Julianne Pigott and Sarah Waidler - in collaboration with a colleague from St Andrews, Jennifer Key.

Hagiographers, tasked with writing the biographies of the holy men and women who converted pagan populations or headed Christian communities, relied on the wondrous and weird to establish the bona fides of the saints who populated the religious landscape of early England, Ireland, Scotland and Wales. “The layered stories of saints’ acts served multiple purposes in medieval communities, from regulating orthodox religious behaviour to explaining the otherwise unexplainable in the natural world,” said Pigott.

Political expediency was another aspect of saintliness: a timely miracle could save a dynasty. When his local king feared that he would die before producing a male heir, Saint Abban is depicted as coming to his rescue. Abban took the king’s new born daughter in his hands “and prayed to God that the king might have an heir; and the girl he immersed in the font he took out as a boy, and laid it in the king’s bosom. ’Here is thy son,’ he said. And the king was exceedingly glad”. 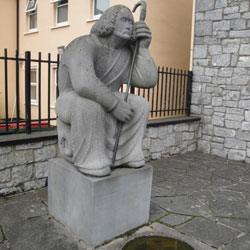 Pigott explained: “It isn’t difficult to imagine how a narrative such as this might have served the needs of both ruler and ruled. Potentially, it reassured contemporary audiences that, by divine intervention, the proper order of succession would be followed, and life would continue as normal. Though, to the modern reader it’s certainly more complicated.”

The conference is the first step in a project to categorise and chart the thousands of miracle stories recorded about saints of the British Isles between 500 and 1300.  The organisers hope that this collaborative tool will help students and established scholars plot the parallels and divergences between textual accounts of wonder-working across linguistic and geographic boundaries.

Their ultimate intention is to develop an online database – called Mapping Miracles - that will allow scholars to see how miracles recorded in texts that were often composed centuries and hundreds of miles apart, share commonalities and differences. While this week the current Pope made saints of two former popes, the medieval path to sainthood was a much more democratic affair. Authors created, copied and amended miracle accounts to support the case of their chosen holy-man, often to accord with local knowledge and customs.

Gallagher said: “When we began work on this project each of us was struck by the differences in the miracle accounts we has each previously considered to be universal. We all have specialisms in a certain range of vernacular and Latin texts, but when we began this collaborative research, we realised that the assumptions we held as a result of our own work, may not hold true for texts produced in other regions. We hope that Friday’s event will spark a similar degree of enthusiasm from others working in related fields." 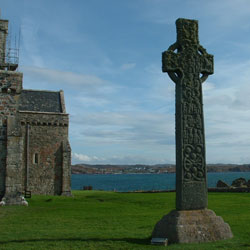 As a digital database, Mapping Miracles will offer significant advantages over more conventional efforts at creating indices of literary motifs, as the proposed online format will facilitate complex cross referencing, creating a richer and more nuanced picture of the material, while also allowing scholars from around the world to contribute to the process. “The transformation of a baby, from girl to boy, attributed to Saint Abban is just one example of how the database might be used to categorise a miracle in several ways,” said Pigott. “It’s interesting on a number of levels: the sacramental setting of baptism, the mutability of gender, and the provision of service to a king and his political needs.”

Today’s keynote speaker will be medievalist Professor Robert Bartlett (St Andrews). Well known as a presenter, most recently of the BBC Two series The Plantagenets, he will talk about ‘Narrative Motifs in Medieval Miracle Accounts’.  Other speakers will include Dr Rosalind Love (Cambridge University), who will discuss the Miracles of St Eadburh of Lyminge, and Professor Dorothy Ann Bray who will give an insight into her earlier work on developing an index of miracles in the texts of Irish saints’ lives. 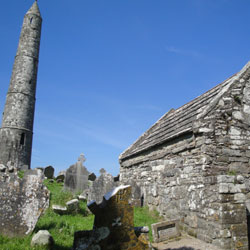 Waidler said: “Miracles were a strong feature of the extensive bodies of Latin and vernacular literatures produced in these islands throughout the medieval period. Reading these texts today we are offered a window on the medieval mind, helping us to understand how people might have thought about not just the divine, but their own lives and personal concerns. The landscape itself, with its place names, is a record of how deeply the lives of the saints are scored into our culture.

Miracles are told and retold in the texts that survive in medieval and early modern manuscripts we find littered across European libraries. For now, the Mapping Miracles team is focusing on the British Isles but as hagiography is not confined to one geographic region or even one period of history, there’s no reason to suppose that their online project won’t expand accordingly. Gallagher noted: “Part of the fascination of miracles lies in the repetitive nature of narratives that have endured for so long – rather as pop music, much of it is very simplistic in form and content, yet it’s popular for exactly that familiarity.” 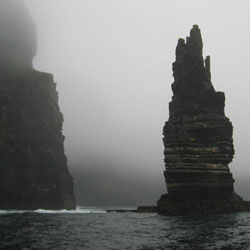 Pigott added: “Notional familiarity may be consciously constructed, and we can’t just read repetition as failure to innovate. Medieval authors took the universal and particularised and localised it. I would argue they often turned stereotypes into oicotypes - to borrow a term from folkloric studies. For example, they took Biblical miracles and made them more relevant to local concerns, so the Irish saint conveniently changes water into beer, rather than wine. A miracle tale will resonate more with the reader if they can recognise their own cultural values at play.”

Julianne Pigott is a Gates Cambridge Scholar. For more information on the Mapping Miracles project http://mappingmiracles.wordpress.com/

Credit: Reproduced by kind permission of the Master and Fellows of Corpus Christi College, Cambridge