Neanderthals may have been infected by diseases carried out of Africa by humans, say researchers

Review of latest genetic evidence suggests infectious diseases are tens of thousands of years older than previously thought, and that they could jump between species of ‘hominin’. Researchers says that humans migrating out of Africa would have been ‘reservoirs of tropical disease’ – disease that may have sped up Neanderthal extinction.

A new study suggests that Neanderthals across Europe may well have been infected with diseases carried out of Africa by waves of anatomically modern humans, or Homo sapiens. As both were species of hominin, it would have been easier for pathogens to jump populations, say researchers. This might have contributed to the demise of Neanderthals.

Researchers from the universities of Cambridge and Oxford Brookes have reviewed the latest evidence gleaned from pathogen genomes and DNA from ancient bones, and concluded that some infectious diseases are likely to be many thousands of years older than previously believed.

There is evidence that our ancestors interbred with Neanderthals and exchanged genes associated with disease. There is also evidence that viruses moved into humans from other hominins while still in Africa. So, the researchers argue, it makes sense to assume that humans could, in turn, pass disease to Neanderthals, and that – if we were mating with them – we probably did.

Dr Charlotte Houldcroft, from Cambridge’s Division of Biological Anthropology, says that many of the infections likely to have passed from humans to Neanderthals – such as tapeworm, tuberculosis, stomach ulcers and types of herpes – are chronic diseases that would have weakened the hunter-gathering Neanderthals, making them less fit and able to find food, which could have catalysed extinction of the species.

“Humans migrating out of Africa would have been a significant reservoir of tropical diseases,” says Houldcroft. “For the Neanderthal population of Eurasia, adapted to that geographical infectious disease environment, exposure to new pathogens carried out of Africa may have been catastrophic.”

“However, it is unlikely to have been similar to Columbus bringing disease into America and decimating native populations. It’s more likely that small bands of Neanderthals each had their own infection disasters, weakening the group and tipping the balance against survival,” says Houldcroft.

New techniques developed in the last few years mean researchers can now peer into the distant past of modern disease by unravelling its genetic code, as well as extracting DNA from fossils of some of our earliest ancestors to detect traces of disease.

In a paper published today in the American Journal of Physical Anthropology, Houldcroft, who also studies modern infections at Great Ormond Street Hospital, and Dr Simon Underdown, a researcher in human evolution from Oxford Brookes University, write that genetic data shows many infectious diseases have been “co-evolving with humans and our ancestors for tens of thousands to millions of years”.

The longstanding view of infectious disease is that it exploded with the dawning of agriculture some 8,000 years ago, as increasingly dense and sedentary human populations coexisted with livestock, creating a perfect storm for disease to spread. The researchers say the latest evidence suggests disease had a much longer “burn in period” that pre-dates agriculture.

In fact, they say that many diseases traditionally thought to be ‘zoonoses’, transferred from herd animals into humans, such as tuberculosis, were actually transmitted into the livestock by humans in the first place.

“We are beginning to see evidence that environmental bacteria were the likely ancestors of many pathogens that caused disease during the advent of agriculture, and that they initially passed from humans into their animals,” says Houldcroft.

“Hunter-gatherers lived in small foraging groups. Neanderthals lived in groups of between 15-30 members, for example. So disease would have broken out sporadically, but have been unable to spread very far. Once agriculture came along, these diseases had the perfect conditions to explode, but they were already around.”

There is as yet no hard evidence of infectious disease transmission between humans and Neanderthals; however, considering the overlap in time and geography, and not least the evidence of interbreeding, Houldcroft and Underdown say that it must have occurred. 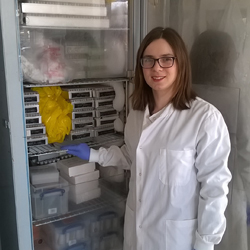 Neanderthals would have adapted to the diseases of their European environment. There is evidence that humans benefited from receiving genetic components through interbreeding that protected them from some of these: types of bacterial sepsis – blood poisoning occurring from infected wounds – and encephalitis caught from ticks that inhabit Siberian forests.

In turn, the humans, unlike Neanderthals, would have been adapted to African diseases, which they would have brought with them during waves of expansion into Europe and Asia.

The researchers describe Helicobacter pylori, a bacterium that causes stomach ulcers, as a prime candidate for a disease that humans may have passed to Neanderthals. It is estimated to have first infected humans in Africa 88 to 116 thousand years ago, and arrived in Europe after 52,000 years ago. The most recent evidence suggests Neanderthals died out around 40,000 years ago.

Another candidate is herpes simplex 2, the virus which causes genital herpes. There is evidence preserved in the genome of this disease that suggests it was transmitted to humans in Africa 1.6 million years ago from another, currently unknown hominin species that in turn acquired it from chimpanzees.

“The ‘intermediate’ hominin that bridged the virus between chimps and humans shows that diseases could leap between hominin species. The herpesvirus is transmitted sexually and through saliva. As we now know that humans bred with Neanderthals, and we all carry 2-5% of Neanderthal DNA as a result, it makes sense to assume that, along with bodily fluids, humans and Neanderthals transferred diseases,” says Houldcroft.

Recent theories for the cause of Neanderthal extinction range from climate change to an early human alliance with wolves resulting in domination of the food chain. “It is probable that a combination of factors caused the demise of Neanderthals,” says Houldcroft, “and the evidence is building that spread of disease was an important one.”