How 'more food per field' could help save our wild spaces

Increased farm yields could help to spare land from agriculture for natural habitats that benefit wildlife and store greenhouse gases, but only if the right policies are in place. Conservation scientists call on policymakers to learn from working examples across the globe and find better ways to protect habitats while producing food on less land.

Reconciling agriculture and conservation is one of this century's greatest challenges

Agricultural expansion is a leading cause of wild species loss and greenhouse gas emissions. However, as farming practices and technologies continue to be refined, more food can be produced per unit of land – meaning less area is needed for agriculture and more land can be 'spared' for natural habitats.

While this may sound like good news for nature, conservation scientists warn that, without the right policies, higher farm yields could be used to maximise short-term profits and stimulate greater demand, resulting in less wilderness and more unnecessary consumption and waste.

Now, leading conservationists writing in the journal Science are calling on policymakers to harness the potential of higher-yield farming to spare land for conservation, instead of solely producing more food and profit. By minimising the footprint of farming in this way, vital land could be spared for maintaining and restoring the rapidly dwindling natural world.

The authors describe a series of "land-sparing mechanisms" that link yield increases with habitat protection, such as land-use zoning and smart subsidy schemes, along with real-world examples that show how they can work – from India to Latin America.

They write that replicating these mechanisms elsewhere depends on "the political will to deliver strong environmental governance".

"Reconciling agriculture and conservation is one of this century's greatest challenges," said Dr Ben Phalan from Cambridge University's Department of Zoology.

"To help meet that challenge, we need to move on from thinking about higher yields simply as a means to produce more food, and to use them to free up land for conserving biodiversity and ecosystem services," said Phalan, who authored the policy paper with colleagues from Cambridge, the RSPB and Brazil.

Previous research from Cambridge and elsewhere has shown sparing land for nature by producing more food per field is the "least worst option" for both biodiversity and greenhouse gas emissions, says co-author Andrew Balmford, Cambridge professor of conservation science.

"Sparing tracts of land as natural habitat is much better for the vast majority of species than a halfway house of lower-yielding but 'wildlife-friendly' farming, and we have recently shown that in the UK land spared through high-yield farming could even sequester enough greenhouse gases to mitigate the UK's agricultural emissions," said Balmford.

However, Phalan says that policies to encourage higher farm yields need to avoid the 'rebound effect'. First identified by William Jevons in 1865 – when he noticed more efficient engines increased rather than reduced coal use, as engines were put into more widespread use – the rebound effect for higher yields could see food prices drop, encouraging greater consumption, more food waste and even more conversion of habitats to farmland.

Higher yields may also increase the cost of conservation if they allow farmers to earn more per field. "If a hectare of farmland is producing higher profits, farmers will charge more to give it up for conservation," said Phalan. He says that conservation efforts can be undermined by unintended consequences. "Halting agricultural intensification or expansion in one area may just shift pressure to farm in others. Increasing farm yields can help counter this 'leakage'." 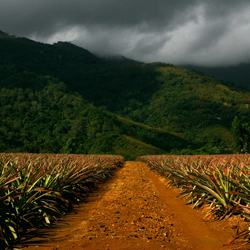 The land-sparing approaches advocated by the researchers are designed to address both rebound effects and leakage. Examples from around the world show how these approaches can work, although researchers caution that further work is needed to improve and test each of them.

Designating "land-use zones" for both conservation and farming would safeguard habitats, while incentivising higher yields to compensate for limits on the extent of farmland. Researchers say that restrictions should target export commodities rather than staple foods.

In Costa Rica, for example, the clearance rate of mature forests halved after the government zoned forests as off-limits for agricultural expansion. Food production for export shifted from cattle farming toward high-yielding pineapple and banana crops.

Economic incentives can be tailored to increase yields and prevent destruction of wildlife, with payments conditional on conservation. Himalayan herders are rewarded for setting aside pastures for wild sheep – a food source for snow leopards – and insuring against loss of their livestock. This has dramatically improved yields and eliminated killing of the endangered cats for livestock protection.

To encourage land sparing in developing countries, help with enhancing yields should focus on smallholder farmers growing staple crops. Researchers say that technical advice on water management and multiple cropping should be balanced with advice on reducing any side-effects: by using natural pest control and other agro-ecological methods, for example, instead of pesticides.

Policies and practices to minimise pollution are essential. "If yields are increased using large quantities of fertilisers and pesticides, they can pollute the air and rivers. It is even possible that the effects of this pollution could cancel out the benefits of sparing natural habitats," said Phalan.

Improved farming practices can have a knock-on economic as well as environmental impact. In the Philippines, introducing irrigation helped lowland rice farmers produce two crops per year rather than one. The higher labour demands were met by employing upland farmers, who invested their new income in fertiliser, boosting their own yields and reducing farmland expansion.

Deforestation rates in the uplands halved, while larger and poorer households were those most likely to benefit.

Combinations of these mechanisms and more will make saving land from agriculture and sparing it for nature more likely, write the researchers. They point to Brazil as an example of multiple policy interventions working together:

"Zoning of protected areas and forest conservation on private land, combined with subsidising farmers to increase yields on degraded pastures rather than create new ones, has seen deforestation of the Brazilian Amazon decline steeply since 2004 - although it's too early to say if this success will be sustained," said co-author Dr Bernardo Strassburg of Brazil's International Institute for Sustainability.

Phalan says that, while these examples show land sparing can be achieved, making sure that higher-yield farming benefits nature at scales that matter will require commitment from senior levels of government.

"Making space for nature is largely a question of societal and political priorities," said Phalan. "The challenge is less whether it's possible to reconcile farming and conservation, than whether those with power are willing to make it a priority."