A genome taken from a 36,000 year old skeleton reveals an early divergence of Eurasians once they had left Africa, and allows scientists to better assess the point at which ‘admixture’ - or interbreeding - between Eurasians and Neanderthals occurred. The latest research also points to a previously unknown population lineage as old as the first population separations since humans dispersed out of Africa.

A ground-breaking new study on DNA recovered from a fossil of one of the earliest known Europeans - a man who lived 36,000 years ago in Kostenki, western Russia - has shown that the earliest European humans’ genetic ancestry survived the Last Glacial Maximum: the peak point of the last ice age.

The study also uncovers a more accurate timescale for when humans and Neanderthals interbred, and finds evidence for an early contact between the European hunter-gatherers and those in the Middle East – who would later develop agriculture and disperse into Europe about 8,000 years ago, transforming the European gene pool.

Scientists now believe Eurasians separated into at least three populations earlier than 36,000 years ago: Western Eurasians, East Asians and a mystery third lineage, all of whose descendants would develop the unique features of most non-African peoples - but not before some interbreeding with Neanderthals took place. 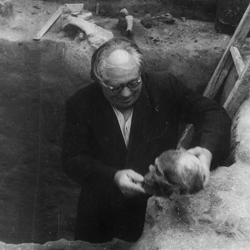 Led by the Centre for GeoGenetics at the University of Copenhagen, the study was conducted by an international team of researchers from institutions including the University of Cambridge’s Departments of Archaeology and Anthropology, and Zoology, and is published today in the journal Science.

By cross-referencing the ancient man’s complete genome – the second oldest modern human genome ever sequenced – with previous research, the team discovered a surprising genetic “unity” running from the first modern humans in Europe, suggesting that a ‘meta-population’ of Palaeolithic hunter-gatherers with deep shared ancestry managed to survive through the Last Glacial Maximum and colonise the landmass of Europe for more than 30,000 years.

While the communities within this overarching population expanded, mixed and fragmented during seismic cultural shifts and ferocious climate change, this was a “reshuffling of the same genetic deck” say scientists, and European populations as a whole maintained the same genetic thread from their earliest establishment out of Africa until Middle Eastern populations arrived in the last 8,000 years, bringing with them agriculture and lighter skin colour.

“That there was continuity from the earliest Upper Palaeolithic to the Mesolithic, across a major glaciation, is a great insight into the evolutionary processes underlying human success,” said co-author Dr Marta Mirazón Lahr, from Cambridge’s Leverhulme Centre for Human Evolutionary Studies (LCHES).

“For 30,000 years ice sheets came and went, at one point covering two-thirds of Europe. Old cultures died and new ones emerged - such as the Aurignacian and the Grevettian - over thousands of years, and the hunter-gatherer populations ebbed and flowed. But we now know that no new sets of genes are coming in: these changes in survival and cultural kit are overlaid on the same biological background,” Mirazón Lahr said. “It is only when famers from the Near East arrived about 8,000 years ago that the structure of the European population changed significantly.”

The Kostenki genome also contained, as with all people of Eurasia today, a small percentage of Neanderthal genes, confirming previous findings which show there was an ‘admixture event’ early in the human colonisation Eurasia: a period when Neanderthals and the first humans to leave Africa for Europe briefly interbred. 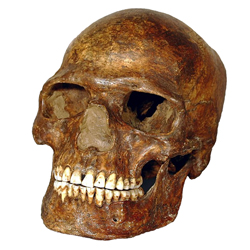 The new study allows scientists to closer estimate this ‘event’ as occurring around 54,000 years ago, before the Eurasian population began to separate. This means that, even today, anyone with a Eurasian ancestry – from Chinese to Scandinavian and North American – has a small element of Neanderthal DNA.

However, despite Western Eurasians going on to share the European landmass with Neanderthals for another 10,000 years, no further periods of interbreeding occurred.

“Were Neanderthal populations dwindling very fast? Did modern humans still encounter them? We were originally surprised to discover there had been interbreeding. Now the question is, why so little? It’s an extraordinary finding that we don’t understand yet,” said co-author Professor Robert Foley, also from LCHES.

Unique to the Kostenki genome is a small element it shares with people who live in parts of the Middle East now, and who were also the population of farmers that arrived in Europe about 8,000 years ago and assimilated with indigenous hunter-gatherers. This early contact is surprising, and provides the first clues to a hereto unknown lineage that could be as old as – or older than – the other major Eurasian genetic lines. These two populations must have interacted briefly before 36,000 years ago, and then remained isolated from each other for tens of millennia.

“This element of the Kostenki genome confirms the presence of a yet unmapped major population lineage in Eurasia. The population separated early on from ancestors of other Eurasians, both Europeans and Eastern Asians,” said Andaine Seguin-Orlando from the Centre for GeoGenetics in Copenhagen.

Mirazón Lahr points out that, while Western Eurasia was busy mixing as a ‘meta-population’, there was no interbreeding with these mystery populations for some 30,000 years – meaning there must have been some kind of geographic barrier for millennia, despite the fact that Europe and the Middle East seem, for us at least, to be so close geographically. But the Kostenki genome not only shows the existence of these unmapped populations, but that there was at least one window of time when whatever barrier existed became briefly permeable. 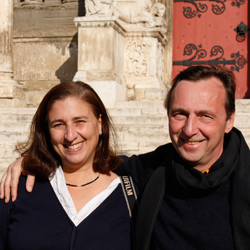 “This mystery population may have remained small for a very long time, surviving in refugia in areas such as the Zagros Mountains of Iran and Iraq, for example,” said Mirazón Lahr. “We have no idea at the moment where they were for those first 30,000 years, only that they were in the Middle East by the end of the ice age, when they invented agriculture.”

Lead author and Lundbeck Foundation Professor Eske Willerslev added: “This work reveals the complex web of population relationships in the past, generating for the first time a firm framework with which to explore how humans responded to climate change, encounters with other populations, and the dynamic landscapes of the ice age.”

Kosenki fossil skull, and and illustration of the Kosteni find