One of the largest area studies of forest loss impacting biodiversity shows that a third of the Amazon is headed toward or has just past a threshold of forest cover below which species loss is faster and more damaging. Researchers call for conservation policy to switch from targeting individual landowners to entire regions.

One of the first studies to map the impact of deforestation on biodiversity across entire regions of the Amazon has found a clear ‘threshold’ for forest cover below which species loss becomes more rapid and widespread.

By measuring the loss of a core tranche of dominant species of large and medium-sized mammals and birds, and using the results as a bellwether, the researchers found that for every 10% of forest loss, one to two major species are wiped out.

This is until the threshold of 43% of forest cover is reached, beyond which the rate of biodiversity loss jumps from between two to up to eight major species gone per 10% of disappeared forest.

While current Brazilian law requires individual landowners in the Amazon to retain 80% forest cover, this is rarely achieved or enforced. Researchers say that the focus should be shifted to maintaining 50% cover – just half the forest – but over entire landscapes rather than individual farms, in a bid to stop whole regions losing untold biodiversity by slipping below the 43% threshold at which species loss accelerates.

Unless urgent action is taken to stem deforestation in key areas that are heading towards or have just dipped below the forest cover ‘threshold’ – which, according to the research team’s models, amounts to a third of the Amazon – these areas will suffer the loss of between 31-44% of species by just 2030.

“These results support the need for a major shift in the scale at which environmental legislation is applied in Brazil and the tropics,” said Dr Jose Manuel Ochoa-Quintero, from Cambridge University’s Department of Zoology, who led the study, published recently in the journal Conservation Biology.

The researchers worked across an area of the North West Amazon over three million hectares in size. They then divided the region into 1,223 squares of 10,000km, and selected 31 squares representative of the spectrum of forest cover across the region (12-90% cover). 27 squares consisted of private land; only four were protected areas (PAs). PAs were only areas in region with almost complete forest cover.

Within the 31 squares, researchers analysed the presence of 35 key species of mammals and birds for which these regions are natural habitats, such as pumas, giant anteaters and red howler monkeys. This was done through a combination of direct observation and recording evidence such as footprints and faeces, as well as in-depth interviews with landowners and residents, who were quizzed about species presence through photographs, animal noises and local knowledge. 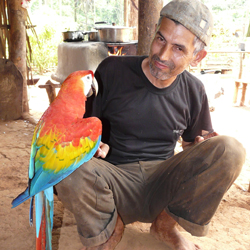 The researchers found a cut-off, conservatively given as 43% forest cover, below which the squares held “markedly fewer species”, with up to eight key species lost for every 10% of further deforestation beyond this threshold.

“This is not just a result of overall loss of habitat, but also reduced connectivity between remaining forest fragments, causing species to hunt and mate in ever-decreasing circles,” said Ochoa-Quintero. “This fragmentation may be the key element of the ‘threshold’ tipping point for biodiversity.”

Encroaching agriculture – from beef to soya production – to feed a growing and more affluent human population means that, at the current rates, the number of 10,000km2 landscapes in the Amazon that fall below the species loss threshold of 43% forest cover will almost double by just 2030. At current rates, by 2030 only a mere 22% of landscapes in the region will be able to sustain three quarters of the key species surveyed for the study.

The expansion of agriculture in recent decades means that around 41% of the original forest in the study region – some two million hectares – has been lost over just the last 40 years.

Researchers say that while PAs can counter agricultural expansion – and many have increasingly called for PAs to expand across the planet amid dire evidence of rapid species decline – the limits on land that can be set aside for PAs means that biodiversity conservation success depends on protecting native vegetation on private lands.

The highest priority landscapes, some 33% of land in the region, are those that either just dipped below the 43% threshold in 2010, or are expected to in the next 20 years.

“Avoiding deforestation and focusing reforestation in the areas that teeter on the species loss threshold will be the most direct and cost-effective way to prevent further species loss in the Amazon region,” added Ochoa-Quintero.

Corn plantation nearby remaining forest in the Amazon region