The wide-ranging objects on display at Buddha’s Word, an exhibition at the Museum of Archaeology and Anthropology, show how Tibetan book makers used the resources around them to produce manuscripts conveying the messages of a faith in which texts themselves are sacred objects.

In creating the displays we’re telling multiple interconnecting stories about the production and dissemination of texts right up to the present day when Buddhists have embraced the opportunities offered by digital media and the internet.

A yak will provide most of the things humans need to survive: meat and milk, fibre and fuel, traction and transport – and, last but not least, warmth and companionship. A traditional Tibetan recipe for making a luxurious blue-black paper goes a step further: it lists fresh yak brain, along with soot and a small amount of hide glue. Mixed into a glutinous paste, these ingredients create the glossy surface used to stunning effect in illuminated manuscripts.

Buddha’s Word: The Life of Books in Tibet and Beyond, an exhibition at Cambridge University’s Museum of Archaeology and Anthropology (MAA), explores not just the cultural and religious significance of the texts used in Tibetan manuscripts but also the production of these manuscripts – from the making of paper using locally available plants through to the sourcing of pigments used for writing and painting – as well as their transmission across mountains and oceans.

The interdisciplinary exhibition is the outcome of a number of AHRC-funded projects that made it possible to explore the vaults of Cambridge libraries and museum, connect literary artifacts to their place of origin, and the living traditions of book making, and in some cases discover the significance of objects that have long been kept hidden in boxes and never put on display before.

Suspended above the entrance to Buddha’s Word is an oblong book wrapped in bright orange cloth. This is a Buddhist text. “Its presence reminds us of the Tibetan pilgrims’ practice of walking underneath book shelves in the monasteries they visit to get the blessing from the sacred scriptures,” said Dr Hildegard Diemberger, curator of the exhibition with colleagues Dr Mark Elliott and Dr Michela Clemente.

“It also reminds us of a story narrated in many Tibetan texts telling of the miraculous arrival of the first Buddhist scriptures.  At the dawn of the Buddhist civilisation, a text fell from heaven and was received by a king. Unable to read it, and unsure what to do, he placed it in a casket and worshipped it. The scripture dispensed its blessings and the king’s youth and vigour were restored.”

Diemberger went on: “Tibetan stories and ritual practices highlight the power of the written word and connect the Land of Snow to the wider context of Buddhist civilisations in which books containing the words of the Buddha and of Buddhist masters have travelled widely and shaped the spiritual and material world of many peoples.”

Buddha’s Word and the accompanying catalogue provide a window into the world-wide scholarship that explores the techniques and technologies developed by Tibetan craftsmen and scholars to illustrate and disseminate the teachings of Buddha. “In creating the displays we’re telling multiple interconnecting stories about the production and dissemination of texts right up to the present day when Buddhists have embraced the opportunities offered by digital media and the internet,” said Diemberger. “We’ve also made exciting connections across time and space as we’ve traced objects in Cambridge University collections back through their trajectories to their sources.”

A wide range of beautiful exhibits that found their way to Cambridge from various parts of Asia over the 19th and early 20th century are on display, including some of the world most ancient extant Buddhist illuminated manuscripts. Together they provide an insight into the variety and beauty of Buddhist literary artifacts, setting Tibetan book culture in its wider context.

For the first time in the UK, the public are also able to see the tools and processes used to create sacred texts that are both spiritually significant and visually stunning. They include examples of the moulds, mallets and stirrers used to make paper, and the printing blocks and cutting tools needed to produce prayer flags as well as pens and pen cases. 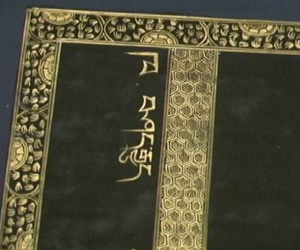 “The objects we have taken out of store for the first time include an iron pen case given, along with other items, to MAA by Alexander (Sandy) Wollaston, a doctor on the 1921 British Everest Exhibition, and we can imagine it being used by a local official in Kharta or one of the other valleys north of Mount Everest. Other objects come straight from the living context like the bamboo pen recently donated to the exhibition by a hermit living in the Sherpa area to the south of Mount Everest,” said Diemberger.

The curators have invited experts from throughout the world to contribute their insights into the craftsmanship of manuscript production. Among them is James Canary of Indiana University, who has travelled extensively in the Himalayan region researching Tibetan book craft. In an article for the catalogue, he focuses on the production of mthing shog manuscripts – those in which a burnished blue-black surface provides the background to sacred writings.

“To prepare the black mixture, the craftsman kneaded by hand the brains of a freshly slaughtered yak, sheep or goat combined with the very fine powdered soot and a small amount of cooked glue hide,” explained Canary.

“If there is too much brain material in the mix the paper will have an oiliness that will resist later writing and can also develop saponification problems, resulting in a white soapy bloom. The paste is painted on the surface of the paper which is then burnished with a piece of conch shell or a bead to make a lustrous surface for the calligraphy.”

On display in the exhibition is a modern mthing shog manuscript by the late Sonam Norgyal, one of the few artists to have maintained the tradition to the present day. Collected by Canary, its gold lettering on a rich background is a fine example of a technique known to scholars as chrysography.

Wood, birch-bark and palm leaf predated paper as a writing surface in Tibet: palm-leaves, which do not grow in Tibet, have had a long lasting impact on the physical characteristics of Tibetan books; the majority of them is in fact made of narrow long sheets of paper that remind of the ancient palm-leaf manuscripts with which Buddhist teachings travelled from India to Tibet and across Asia. It is thought that the craft of paper-making spread from neighbouring countries at a time when Tibet developed a powerful empire and record keeping became a critical undertaking. Research suggests that from at least the ninth century Tibetans began to collect plants growing locally to make paper.

A number of plants in the Thymelaeaceae family have stems and roots with conductive tissue that is strong and fibrous – ideal for making string and paper. Several early medical treatises listing plants used for medicinal purposes also mention their suitability for paper making.  The widespread use of some of these plants, according to reports by British visitors to Tibet, continued right up until the 1920s - and even today a few printing houses and paper-making centres make use of plants gathered locally to make specialist products. 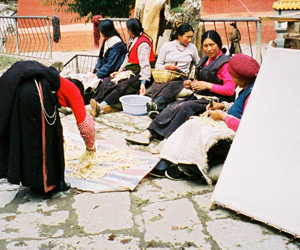 Research by paper specialist Agnieszka Helman-Wazny (University of Arizona) shows that the hand processes of making paper from plant material has changed little over the centuries with each sheet being made separately. Paper pulp is prepared by beating the plant material on a stone with a wooden mallet. The resulting fibrous mass is mixed with water and poured into a mould. This mould is ‘floated’ in water and tipped to and fro until its contents are evenly distributed. The mould is then removed from water and left to dry.

“Further processes were often used to make a smooth surface for writing and to produce particular types of paper. Tibetan paper makers often glued several sheets together using a paste of boiled wheat flour or animal-based glue,” said Helman-Wazny. “They were extremely resourceful in their exploitation of materials to make books and used ramie, hemp and mulberry bark as well as stone, metal and rock.”
Tibetan artists and painters used pigments and colourants obtained locally from minerals and plants.

One of the star items in the exhibition are two pages/folios of the 1521 Royal Edition of the Mani bka’ ‘bum (One hundred thousand proclamations of the Mantra), a treasure given to Cambridge University Library by Lt-Col Laurence A Waddell in 1905 following the Younghusband Military Expedition to Tibet.  A non-invasive analytical technique called reflectance spectroscopy, carried out by experts at the Fitzwilliam Museum, revealed that the colours seen in the figures it depicts were achieved using a red obtained from cinnabar, blue from azurite, indigo from woad, and yellow from arsenic, a chemical that had the added benefit of protecting manuscripts from insect damage.

Developments continue. Tibetans and the worldwide community of Tibetan scholars have enthusiastically embraced the opportunities offered by digital media and the internet to collate and open up access to manuscripts that lie scattered across the world.  Just as past technologies – such as printing – provided a means for circulating Buddhist teaching so are digital technologies being increasingly explored and used today. In the words of the well known Tibetan lama Chokyi Nyima Rinpoche:

I’ll be doing prostrations every morning to this computer.
Thank you so much
You are giving all of us a huge gem,
a jewel and a gem.