School closures may have wiped out a year of academic progress for pupils in Global South, study warns

As much as a year’s worth of past academic progress made by disadvantaged children in the Global South may have been wiped out by school closures during the COVID-19 pandemic, researchers have calculated.

Despite teachers’ best efforts, we know school closures have held up, or reversed, the progress of millions of children

The research, by academics from the University of Cambridge and RTI International, attempts to quantify the scale of learning loss that children from poor and marginalised communities in the Global South may have experienced, and the extent to which home support and access to learning resources could ameliorate it.

While it is known that the education of these children has suffered disproportionately during the pandemic, it is much harder to measure exactly how much their academic progress has been impeded while schools have been closed.

The researchers used data from Ghana to model the likely impact of closures for children in remote and deprived parts of that country. They found that on average, 66% of the learning gains made in foundational numeracy during the academic year are lost during three months out of school. The outcome is, however, far worse for children without adequate home learning resources or support.

The authors suggest these findings provide a glimpse of a much wider pattern of learning loss that is being experienced by millions of disadvantaged children around the world.

Co-author Ricardo Sabates, from the REAL Centre in the University’s Faculty of Education, said: “Despite teachers’ best efforts, we know school closures have held up, or reversed, the progress of millions of children. This study is one approach to estimate how much learning could have been lost, and how much worse this may have been for children from disadvantaged settings.”

“These figures represent an estimate of learning loss for children who spent 3 to 4 months out of school. We expect that as schools remained closed for longer, losses could be higher. We also acknowledge the important support that many families and communities provided with supplementary learning, which may have in turn limited the potential loss overall.”

The study built on earlier research that highlighted the significant learning losses that occur when certain groups of children in developing countries move from one academic year to the next, particularly those who change language of instruction, and disadvantaged girls.

The researchers used data charting the progress of more than 1,100 students on Ghana’s Complementary Basic Education (CBE) programme between 2016 and 2018. This programme supports children aged eight to 14 who would not normally attend school, providing them with education in their own language and at flexible times. On completion, students are encouraged to enrol at a local government school, but the start of that school year occurs after a three-month gap, during which they receive no education.

The researchers compared participants’ scores in foundational maths tests at four stages: when they started the CBE, when they finished, when they joined a government school, and after their first year in government school. They also accessed data about how much home learning support the students had – for example, whether they had books at home, or could seek help from an adult when struggling with homework.

During the CBE programme, the students’ test scores improved, on average, by 27 percentage points. When they were tested again after the three-month gap, however, their scores had reduced by an average of 18 percentage points. Two-thirds of the gains these students had made during the previous academic year were therefore lost while they were out of school. The researchers argue that this is an upper estimate of the expected scale of loss during an equivalent period of school closures due to COVID-19. Fortunately, during the pandemic community efforts to enhance learning may have mitigated this effect for some children.

In spite of this, they also found that the basic learning loss was compounded among children who lacked support to study at home. For example:

Encouragingly, the study showed that in the first year of formal education, students not only recouped their learning loss, but improved, while the attainment gap between more and less advantaged students narrowed.

In many countries, however, it is becoming clear that many disadvantaged students – especially marginalised groups such as disabled children and many girls – are not returning to school. Therefore, the researchers suggest supporting access to diverse forms of education for students from less-advantaged backgrounds. There is evidence to show that community-based programmes, for example, can enhance a range of learning skills for these children. “Learning at home and in communities has to be reimagined if rapid gains are to be achieved as we continue to face the COVID-19 situation,” the authors say.

The pattern of learning loss charted in Ghana may also apply far beyond the Global South. “This is an international challenge,” said co-author Emma Carter, also from the REAL Centre. “In Europe and the US, children from lower socio-economic backgrounds will similarly be experiencing severe learning loss. The levels of attainment may differ between countries, but it is highly likely that the pattern of loss remains.”

The evaluation data used in the study was commissioned and funded by FCDO Ghana. The research is published in the International Journal of Educational Development. 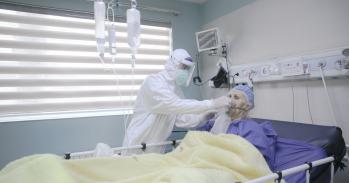