A way of printing lasers using everyday inkjet technology has been created by scientists. The development has a wide range of possible applications, ranging from biomedical testing to laser arrays for displays.

This simple process can form lasers on virtually any surface, rigid or flexible, and can potentially be applied using existing printing and publishing equipment.

The research is reported in the journal “Soft Matter” and the full article can be found here.

A laser is a characteristically “pure” form of light, occupying a very narrow wavelength range, or colour. Laser devices are already ubiquitous in modern life; they are used to read data from Blu-Ray discs and deliver high-speed internet around the world, for example. In science and technology, lasers are similarly versatile - being employed for a wide range of purposes such as medical treatment and testing, or space-based remote sensing.

Today, most lasers are made on silicon wafers using expensive processes similar to those used to make microprocessors. However, scientists have now designed a process to “print” a type of organic laser on any surface, using technology very similar to that used in the home.

The process involves developing lasers based on chiral nematic liquid crystals (LCs), similar to the materials used in flat-panel LCD displays. These are a unique class of photonic materials that, under the right conditions, can be stimulated to produce laser emissions.

If aligned properly, the helix-shaped structure of the LC molecules can act as an optically resonant cavity - an essential component of any laser. After adding a fluorescent dye, the cavity can then be optically excited to produce laser light.

Until now, high quality LC lasers have been produced by filling a thin layer of LC material between two accurately spaced glass plates a hundredth of a millimetre wide. The glass is covered with a specially-prepared polymer coating to align the LC molecules.

Unfortunately the process is still a complex one - it requires a cleanroom environment and involves multiple, intricate production steps. Furthermore, the range of substrates available is pretty limited - typically restricted to glass or silicon, for example.

Researchers from the Centre for Molecular Materials for Photonics and Electronics and the Inkjet Research Centre - both in the Department of Engineering at the University of Cambridge - have devised a way to align the LC molecules and produce high resolution multi-colour laser arrays in one step, by printing them.

Using a custom inkjet printing system, the researchers printed hundreds of small dots of LC materials on to a substrate covered with a wet polymer solution layer. As the polymer solution dries, the chemical interaction and mechanical stress cause the LC molecules to align and turn the printed dots into individual lasers.

The researchers believe that this simple process can form lasers on virtually any surface, rigid or flexible, and can potentially be applied using existing printing and publishing equipment (similar to the ones used to print papers or magazines).

The process has been developed initially to produce compact, tuneable laser sources and high-resolution laser displays. However, it can also be used to print fluorescence tag-based “lab-on-a-chip” arrays used extensively in biology and medicine. By being able to put lasers virtually anywhere, the potential applications are limited only by imagination.

A UK patent application to protect the invention has now been filed with the help of Cambridge Enterprise, a subsidiary of the University of Cambridge which is responsible for commercialisation arrangements for University discoveries. 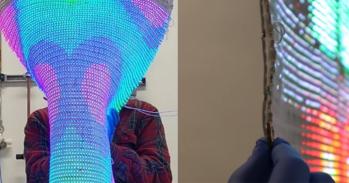 Pictures of inkjet-printed LC laser droplets on to a PVA film.