Pollinator species vital to our food supply are under threat, warn experts

A new report from experts and Government around the world addresses threats to animal pollinators such as bees, birds and bats that are vital to more than three-quarters of the world’s food crops, and intimately linked to human nutrition, culture and millions of livelihoods. Scientists say simple strategies could harness pollinator power to boost agricultural yield.

People’s livelihoods and culture are intimately linked with pollinators around the world. All the major world religions have sacred passages that mention bees

Delegates from almost 100 national Governments have gathered in Kuala Lumpur to discuss how to address the threats facing animal pollinators: the bees, flies, birds, butterflies, moths, wasps, beetles and bats that transport the pollen essential to the reproduction of much of the world’s crops and plant life.

It is the first time the global community has gathered on this scale to focus on the preservation of the small species that help fertilise more than three quarters of the leading kinds of global food crops and nearly 90% of flowering wild plant species.

A report on pollinator species produced over two years by an international team of 77 scientists, including Cambridge’s Dr Lynn Dicks, has been adopted by the Intergovernmental Science-Policy Platform on Biodiversity and Ecosystem Services (IPBES) today. IPBES has 124 member Governments.

The report is the first assessment ever issued by IPBES, and the first time that such an assessment has brought together multiple knowledge systems comprehensively, including scientific, and indigenous and local knowledge. It will highlight the threats to animal pollinators, and the major implications of these species’ declines for the world’s food supply and economy.

But the report also details the ways that pollinator power can be used for the benefit of biodiversity, food security and people: by harnessing natural relationships between plants and animals to improve agricultural yields and strengthen local communities.

“It is incredible to see international Governments coming together to discuss the problem of pollinators in this way,” says Lynn Dicks, from Cambridge University’s Department of Zoology.

“Without pollinators, many of us would not be able to enjoy chocolate, coffee and vanilla ice cream, or healthy foods like blueberries and brazil nuts. The value of pollinators goes way beyond this. People’s livelihoods and culture are intimately linked with pollinators around the world. All the major world religions have sacred passages that mention bees.”

The volume of pollinator-dependent food produced has increased by 300% over the past 50 years, including most fruits from apple to avocado, as well as coffee, cocoa, and nuts such as cashews. This shows an increasing dependence of agriculture on pollinators.

Such crops now occupy around 35% of all agricultural land. While these crops rely on animal pollination to varying degrees – along with, for example, wind-blown pollination – the scientists estimate that between 5 and 8% of all global crop production is directly attributable to animal pollinators, with an annual market value that may be as much as 577 billion US dollars.

However, the experts warn that a variety of agricultural practices are contributing to steep declines in key pollinating species across Europe and North America. In Europe, populations are declining for at least 37% of bee and 31% of butterfly species.

A lack of data for Africa, Latin America and Asia means we are currently in the dark about the status of pollinators in many parts of the world, say the scientists. Where national ‘red lists’ are available, they show that up to 50% of global bee species, for example, may be threatened with extinction.

For some crops, including cocoa, wild pollinators contribute more to global crop production than managed honey bees. Wild bee populations are of particular concern, as bees are “dominant” pollinators, say scientists, and visit over 90% of the leading global crop types.

Changes in land-use and habitat destruction are key drivers of pollinator decline. Increasing crop monocultures – where the same plant is homogenously grown across vast swathes of land – mean that the plant diversity required by many pollinators is dwindling.

Increased use of pesticides are a big problem for many species – insecticides such as neonicotinoids have been shown to harm the survival of wild bees, for example – and climate change is shifting seasonal activities of key pollinators, the full effects of which may not be apparent for several decades.

The decline of practices based on indigenous and local knowledge also threatens pollinators. These practices include traditional farming systems, maintenance of diverse landscapes and gardens, kinship relationships that protect specific pollinators, and cultures and languages that are connected to pollinators.

Many livelihoods across the world depend on pollinating animals, say scientists. Pollinator-dependent crops include leading export products in developing countries (such as coffee and cocoa) and developed countries (such as almonds), providing employment and income for millions of people.

If the worst-case scenario – a complete loss of animal pollinators – occurred, not only would between 5 and 8% of the world’s food production be wiped out, it would lower the availability of crops and wild plants that provide essential micronutrients to human diets, risking vastly increased numbers of people suffering from Vitamin A, iron and folate deficiency.

However, the assessment says that by deploying strategies for supporting pollinators, we could not only preserve the volume of food they help us produce, but we could boost populations and in doing so could even improve production in sustainable farming systems, so-called “ecological intensification”. 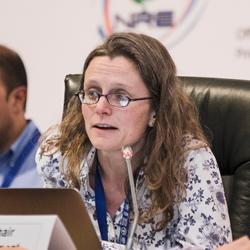 Many pollinator-friendly strategies are relatively straightforward. Maintaining patches of semi-natural habitats throughout productive agricultural land would provide nesting and ‘floral resources’ for many pollinators. This could be as simple as strips of wild flowers breaking up crop monocultures, for example, and identifying and tending to nest trees in farming settings.

Certain traditional crop rotation practices using seasonal indicators such as flowering to trigger planting also help to maintain diversity – and it is diversity that is at the heart of flourishing pollinator populations.

There are actions that Governments around the world could take, says Dr Dicks, such as raising the standards of pesticide and GMO risk assessment, or supporting training for farmers in how to manage pollination and reduce pesticide use. National-level monitoring of wild pollinators, especially bees, would help to address the lack of long term data on pollinator numbers.

“There are many things individual people can do to help pollinators, and safeguard them for the future,” says Dr Dicks.

“Planting flowers that pollinators use for food, or looking after their habitats in urban and rural areas, will help. Everyone should also think carefully about whether they need to use insecticides and herbicides in their own gardens.”

More information about how to help wild pollinators can be found at the Bees Needs website, which is part of the National Pollinator Strategy for England.