From the Front to the Backs: Story of the First Eastern Hospital

From the Front to the Backs: the story of the 1st Eastern General Hospital, Cambridge

One hundred years since the start of the First World War, few Cambridge residents are likely to be aware that the University Library stands on the site of a former military hospital. The First Eastern General, set up within days of the outbreak of the war, treated tens of thousands of returning casualties between 1914 and 1919 .

Now, in a film created by the University of Cambridge, Dr Sarah Baylis looks at the lost history of the First Eastern, examining what life was like is this 'small city on the Backs', its impact on Cambridge  and how it was possible that a building of such significance should have been so widely forgotten. It underlines the military hospital's central role in Cambridge as a site of profound individual and collective experience.

While the building of the hospital was underway on a former cricket field belonging to King's and Clare Colleges, patients being repatriated from Europe were housed in the Leys School and Trinity College. The completed hospital, a series of pre-fabricated wooden huts, had up to 1,700 beds, operating theatres and ancillary buildings, a Post Office, shop, cinema and other recreational facilities.  The First Eastern's open air wards and its curative use of direct sunlight and saline baths in the treatment of war wounds attracted a great deal of public attention. Auxiliary hospitals – for convalescents and patients with venereal disease – were also built in the city and surrounding villages.

The hospital brought the town and university into a new proximity, with different kinds of social encounter and shared voluntary efforts.  Professional and volunteer nurses were billeted in empty college rooms, and khaki-clad officers dined at high table. The First Eastern also had a considerable impact on local trades, businesses and suppliers – part compensation for a greatly diminished student population.

For five years the tranquil Backs – where several University colleges back onto the River Cam – were transformed by a relentless stream of horse-drawn and motorised ambulances transporting patients to and from the railway station, deliveries of food, coal, medical supplies and laundry, and for those who could afford it, taxis ferrying thousands of visitors.

When the hospital closed in 1919, the buildings were converted into much needed living units for council tenants waiting to be re-housed. Hundreds of families lived happily in the Burrell's Walk Estate (or 'the Huts' as they were still known) until 1929, when the last physical traces were destroyed. The current University Library building, which now sits on this site, was constructed between 1931 and 1934 by architect Giles Gilbert Scott.

'From the Front to the Backs' draws on a wide range of visual and archival sources, and on research by local writer Philomena Guillebaud, who is interviewed in the film, along with Dr Ana Carden Coyne from the University of Manchester, local librarian Chris Jakes and nonagenarian Edna Welton, whose own family home was one of the former huts of the First Eastern Hospital. 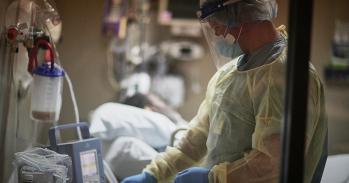 A ward in the First Eastern Hospital