Debris from forests that washes into freshwater lakes supplements the diets of microscopic zooplankton and the fish that feed off them – creating larger and stronger fish, new research shows.

The researchers warn that, as forests are eroded through human activities such as logging, the impacts will be felt in aquatic as well as terrestrial food chains.

In fact, the study was conducted at a Canadian lake chosen because it had suffered ecological disaster during the mid-20th century: acid rain as a result of the local nickel smelting industry.

Despite moves to reduce environmental impact, many areas of vegetation surrounding the lake are still in recovery. This enabled scientists to study Yellow Perch fish from different parts of a lake that has varying degrees of surrounding forest coverage.

Carbon from forest debris has a different elemental mass than carbon produced by algae in the aquatic food chain. By analysing the young Perch that had been born that year, scientists were able to determine that at least 34% of the fish biomass comes from vegetation, increasing to 66% in areas surrounded by rich forest.

Essentially, the more forest around the edge of the lake, the fatter the fish in that part of the lake were.

Scientists say that the young fish in lake areas with scant forest cover were much smaller, and consequently much less likely to survive and breed.

“We found fish that had almost 70% of their biomass made from carbon that came from trees and leaves instead of aquatic food chain sources,” said Dr Andrew Tanentzap from Cambridge’s Department of Plant Sciences, and lead author of the new study, published today in the journal Nature Communications.

“While plankton raised on algal carbon is more nutritious, organic carbon from trees washed into lakes is a hugely important food source for freshwater fish, bolstering their diet to ensure good size and strength,” he said.

The work was conducted at Daisy Lake on the outskirts of the industrial city of Sudbury in Ontario, Canada. The area is part of the boreal ecosystem: a vast subarctic climate system that rings round most of the top of the Northern Hemisphere – full of huge, ancient forests vital to the carbon cycle of Earth.

“More than 60% of the world’s fresh water is in the boreal areas such as Canada, Scandinavia and large parts of Siberia. These areas are suffering from human disturbance such as logging, mining, and forest fires resulting from climate change – all occurrences predicted to intensify in coming years,” said Tanentzap.

The scientists studied eight different ‘watersheds’ surrounding the lake: a given area across which all the moisture drains into a single stream. When these fast-moving streams – full of detritus from forest foliage – hit the slow-moving lake, the debris falls out of suspension and sinks, forming layers of sediment which create mini deltas.

Debris is broken down by bacteria, which is in turn consumed by zooplankton: tiny translucent creatures that also feed on algae. The fish then feed on the zooplankton. Until recently, algae were believed to be the only source of food for zooplankton, but the new research builds on previous work that showed they also feed on bacteria from forest matter drained into lakes. 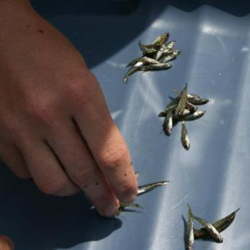 Areas of Daisy Lake closest to the nickel smelt-works remain bare – dirt and rock instead of the once lush forest. The young fish in these parts of the lake were considerably smaller due to less available food. This leaves them susceptible to poor health and predators as they won’t be as strong, so less likely to go on to breed and repopulate.

“It’s estimated that freshwater fishes make up more than 6% of the world’s annual animal protein supplies for humans – and the major and often only source of animal protein for low income families across Bangladesh, Indonesia and the Philippines,” added Tanentzap.

“While we’ve only studied boreal regions, these results are likely to bear out globally. Forest loss is damaging aquatic food chains of which many humans are a part.” 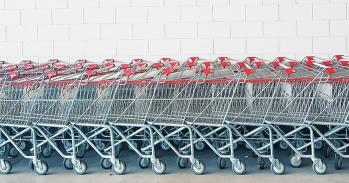 Opinion: What does lockdown mean for the future of our food supply?