Research on Egypt is looking at how to read revolution and grass roots opposition through social media.

Social media allows access to datasets with an unprecedented range of detail, but presents a host of new challenges for researchers

25 January 2011 was the day Egypt’s revolt began. People flooded the streets of cities across the country, calling for an end to the Mubarak regime. Two days later – in a moment unprecedented in history – the government turned off Egypt’s internet, in the hope of quelling massive civil unrest.

The Western media relished portraying the Egyptian uprising as the ‘Facebook revolution’, a digital epoch securing social media’s place in history as a vehicle for political change – an unstoppable galvanising force.

Such views were clearly oversimplistic, especially as the revolution continued apace despite – even because of – the loss of the internet. As one activist stated on his blog, losing the internet at the hands of his own government served as a powerful reminder of “why we’re doing any of this.”

So in what ways did social media influence Egyptian revolution, and how do opposition movements continue to use it? Can researchers capture these digital datasets to analyse social turbulence?

Dr Anne Alexander, a research fellow at the Centre for Research in the Arts, Social Sciences and Humanities (CRASSH), is investigating the digital fingerprints left by Egyptian people on Facebook, Twitter and other social sites during civil unrest.

“I found myself thrown into a huge amount of social media data in my research as a political scientist working on Egypt. The work I’m able to do, the kind of access I have to sources previously inaccessible outside the country – or in many cases full stop – has changed enormously.”

More than 600,000 Egyptians joined Facebook between January and February 2011. On 2 February, the day the internet switched back on, it was the most accessed website in the country. There were 1.5 million Egypt-related tweets in just the first week of the uprising.

The statistics are startling, and it’s perhaps easy to see why the Western media leapt on them. But, as Alexander points out, “it’s not Twitter that overthrew Mubarak, but mass mobilisation and burning down police stations – that’s what makes revolutions.”

Communication technologies were certainly important for Egypt’s uprising, and not just social media. Smartphones enabled protesters to capture footage of events, which were manually relayed – as networks were down – back to ‘media camps’ set up by activists in touch with outside journalists.

These clips were reported by global news agencies such as the BBC, CNN and – critically for Egyptians – Al Jazeera, the Arabic news network that was the most influential source of information for the nation, far outweighing social media.

While Twitter and Facebook contributed to initial online mobilisation, Alexander found that people she interviewed following the uprising said it was large-scale physical gatherings, rallying cries at Friday prayer and traditional activism that led to revolution.

“People attribute agency to technologies when it should be attributed to people. Facebook did not cause a ‘tipping point’. When the stakes are very high – arrest, torture, death – it takes multiple tipping points to reach crucial moments, showing enormous endurance on the part of the people,” said Alexander in a paper co-authored with Dr Miriyam Aouragh of the University of Oxford.

“You have social change colliding with technology. New media played a part as one of a number of tools used by the people, leaving a remarkable rendering of a moment in history that researchers can interrogate.”

Recently, Alexander has been studying the ways in which Facebook in particular has been used during industrial action in post-Mubarak Egypt, to both gather and disseminate information.

Last year, public sector workers striking at many of the country’s sugar refineries used Facebook as an “online newspaper” – uploading interviews with strike committee members, media reports for comment and encouraging debate on the ‘wall’.

A common trait in online labour activism is to use Facebook’s capacity for ‘sharing’ to be transparent about contact with management. Posting all output from meetings lends credibility to industrial action.

“The process of making available all dealings with management – from documents to photos of a meeting – reflects peoples raised expectations for democratic accountability post-revolution, and social media can be a platform for this,” said Alexander. 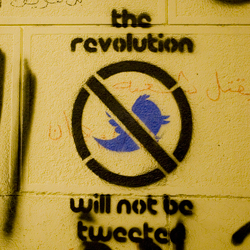 This is particularly important for emerging independent unions as, before the revolution, the trade union federation was – and to some extent still is – an arm of the state.

Striking doctors used social media to gather reports from different provinces, setting up national Facebook pages to channel information, but also to lobby – both the government for increased funding and the wider public for support.

Explanatory videos and leaflets for doctors to distribute among patients were circulated via Facebook, using social media as “essentially a form of PR.”

Some of the most intense debate Alexander encountered in her research has been on constitutional reform in Egypt, as the Muslim Brotherhood – who use a “well- developed ecosystem” of social media – have risen to prominence in the country.

Those opposed have taken to the streets but also to “every social media platform going” and Alexander is able to access voices and opinions that would have been difficult 10 years ago, with “extremely rich” content attached.

For Alexander, social media offers huge opportunities but also challenges. “You have to maintain critical detachment, know the questions and approaches that will help unpick what’s presented – as with any source material.”

The remote access to often thousands of viewpoints, tracking development of events seemingly in ‘real time’ from people on the ground, has unquestionably transformed the ability to research political movements, as well as the movements themselves.

But analysis of social media raises important questions about truth and identity that Alexander finds “disconcerting”.

“The multiplicity of viewpoints, this sense of a godlike panoptical vision that social media seems to provide – offering near-instantaneous presence to events on the other side of the world – can be deceptive.”

As Alexander highlighted, most people who have tried to tweet while evading tear gas will tell you “it’s not instantaneous at all!” and what they choose to share – the viewpoint expressed to the world as fact – is highly selective.

“The digital self has an inevitable aspect of performance, something you’re ‘putting on’ for the outside world, as I’ve discovered through interviews.”

For Alexander, it is critical to ‘triangulate’ when using social media as a source by combining it with interviews both remotely and face to face.

As emerging fields of digital anthropology and ethnography become increasingly valuable for researchers, tools and approaches will need to be developed – as well as ethical boundaries. “I’m not convinced people understand the extent to which what they say is public, and may put them in harm’s way – now or in a few years,” said Alexander.

“Social media allows access to datasets with an unprecedented range of detail, but presents a host of new challenges for researchers. It’s possible to ask questions in new ways but whether social media data can really transform our understanding of society remains to be seen.”

Nasr City/revolution will not be tweeted