Sharpening our knowledge of prehistory on East Africa’s bone harpoons

A project exploring the role of East Africa in the evolution of modern humans has amassed the largest and most diverse collection of prehistoric bone harpoons ever assembled from the area. The collection offers clues about the behaviour and technology of prehistoric hunter-gatherers.

"There are some huge species of fish native to this area and some of the bigger and thicker harpoons may have been used to catch species like Nile Perch, which can grow up to two metres long."

East Africa is the epicentre of human evolution and its archaeological remains offer the potential to fill gaps in our understanding of early modern humans from their earliest origins, around 200,000 years ago, through to the most ‘recent’ prehistory of the last 10,000 years.

The In Africa project, directed by Dr Marta Mirazón Lahr, co-founder of the Leverhulme Centre for Human Evolutionary Studies at the University of Cambridge, is seeking to do exactly that. The group believes that, in East Africa, key ecological and cultural conditions converged, which allowed modern humans to evolve new behaviours and technologies to better exploit the natural resources that they found around them.

For the past five years, they has been working on the palaeoshores of Lake Turkana in Kenya, which has offered significant insights into how people there made use of aquatic resources such as fish or shellfish, something which is seen as a marker of human modernity.

Dr Alex Wilshaw, in Cambridge's Department of Biological Anthropology and a fellow of St John’s College, is a Research Associate on the project. “Looking at prehistoric tools and technology is a key way of exploring when and how the cultural and behavioural traits associated with modern humans were developed,” he explains.

“The area around Lake Turkana is extraordinarily rich not just in fossils, but also in artefacts used to exploit the ecology of the area. In the case of aquatic resources from the lake, these artefacts are often harpoons or points made from bone. While previous archaeological projects have led to pockets of harpoon discovery, the extent of this project has afforded us the opportunity to collect unprecedented numbers of bone harpoons – to date, we have over 500 from 20 different sites.” 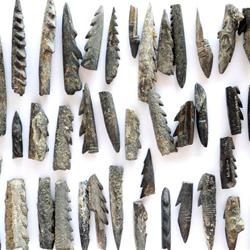 Mirazón Lahr and Wilshaw are now preparing a monograph cataloguing and describing the harpoons to give a clearer picture of the diversity that exists within the collection.

“Together, the harpoons have the potential to offer a spatial and temporal cross-section of the activities of early modern humans in the area and tell us something about functional and stylistic changes in technology,” Wilshaw says. “The sites contain artefacts from groups who lived at different times and if we look at the harpoons in detail, their distinct styles show signs of variation among different populations and could offer clues about the appearance and disappearance of diverse groups as the lake levels rose and fell over time.”

While some of the harpoons were sharpened into elongated spears or barbed points, others look more like hooks. Some have been decorated and polished. “There is some discussion over what the harpoons were used for, but we think it is likely to have been fishing, rather than hunting of land animals, as they were all discovered on the lake edge,” Wilshaw explains. “The harpoons would have been attached to a pole or haft and connected using twine or string which then enabled the hunter-fishers to spear their prey and then pull in their catch. There are some huge species of fish native to this area and some of the bigger and thicker harpoons may have been used to catch species like Nile Perch, which can grow up to two metres long. It is possible that the groups were using them to hunt hippo, which were also common in the area.”

The research team focused their efforts on recovering remains from across an extensive landscape exhibiting the remnants of the lake edge and its surrounding flood plain. Many animal and human remains were fossilised and preserved in mud and sediment on the shores of the lake, but as the lake shrank and the environment became increasingly dry, the wind and rain eroded the surface and exposed the fossils.

This phenomenon led the group to the discovery not just of the bone harpoons, but also of many other prehistoric human remains and artefacts. Published last year in Nature, such fossilised bones protruding from the earth led to the remarkable discovery of the remains of a group of hunter gatherers who were brutally massacred around 10,000 years ago at the site of Nataruk – the earliest record of inter-group violence among prehistoric nomadic people. 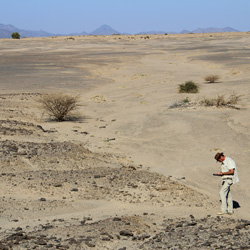 The researchers are hoping to win further funding to unlock more of the secrets of East Africa’s prehistoric harpoons.

“Some appear to have been carved from bone, some from ivory and others from horn, but we would like to do a more detailed analysis of what they were made out of and whether there was a preference for material,” adds Wilshaw. “Searching for patterns in functionality could reveal whether design and material varied for different prey and how creative the people were being with technology. Interestingly, some of the harpoons also look as if they have been polished and residue analysis could tell us what people were using to care for their tools”

The In Africa project, which was funded by the European Research Council, aims to use its fossils and archaeological discoveries to enhance international awareness of the role of Africa in the evolution of human diversity.

“The harpoons are the iconic remains of a people who have disappeared,” says Mirazón Lahr, “when they lived, Lake Turkana was much larger and the environment much richer. These discoveries allow us to track their lives, from when the lake rose as the ice age ended to the point where the lake shrank and desert conditions set in – bringing an end to the tradition that had lasted thousands of years and about which very little was previously known.”

Inset images from the In Africa project.

Going up: birds and mammals evolve faster if their home is rising

Harpoons discovered by the In Africa project