Roads that self-repair, bridges filled with first-aid bubbles, buildings with arteries… not some futuristic fantasy but a very real possibility with ‘smart’ concrete.

We want concrete to be a material for life that can heal itself again and again when wounded.

Skin is renewable and self-repairing – our first line of defence against the wear and tear of everyday life. If damaged, a myriad of repair processes spring into action to protect and heal the body. Clotting factors seal the break, a scab forms to protect the wound from infection, and healing agents begin to generate new tissue.

Taking inspiration from this remarkable living healthcare package, researchers are asking whether damage sensing and repair can be engineered into a quite different material: concrete.

Their aim is to produce a ‘material for life’, one with an in-built first-aid system that responds to all manner of physical and chemical damage by self-repairing, over and over again.

Self-healing materials were voted one of the top-ten emerging technologies in 2013 by the World Economic Forum, and are being actively explored in the aerospace industry, where they provide benefits in safety and longevity. But perhaps one area where self-healing might have the most widespread effect is in the concrete-based construction industry.

Concrete is everywhere you look: in buildings, bridges, motorways, and reservoir dams. It’s also in the places you can’t see: foundations, tunnels, underground nuclear waste facilities, and oil and gas wells. After water, concrete is the second most consumed product on earth; tonne for tonne, it is used annually twice as much as steel, aluminium, plastic and wood combined.

But, like most things, concrete has a finite lifespan. “Traditionally, civil engineering has built-in redundancy of design to make sure the structure is safe despite a variety of adverse events. But, over the long term, repair and eventual replacement is inevitable,” said Professor Abir Al-Tabbaa, from the Department of Engineering and the lead of the Cambridge component of the research project.

The UK spends around £40 billion per year on the repair and maintenance of existing, mainly concrete, structures. However, repairing and replacing concrete structures cause disruptions and contribute to the already high level of carbon dioxide emissions that result from cement manufacturing. What if the life of all new and repaired concrete structures – and in fact any cement-based material, including grout and mortar – could be extended from an average of several decades to double this, or more, through self-healing?

In 2013, researchers in Cambridge joined forces with colleagues at the Universities of Cardiff (who lead the project) and Bath to create a new generation of ‘smart’ concrete and other cement-based construction materials.

“Previous attempts in this field have focused on individual technologies that provide only a partial solution to the multi-scale, spatial and temporal nature of damage,” explained Al-Tabbaa. By contrast, this study, funded by the Engineering and Physical Sciences Research Council, provides an exciting opportunity to look at the benefits of combining several ‘healthcare packages’ in the same piece of concrete.

“Like the many processes that occur in skin, a combination of technologies has the potential to protect concrete from damage on multiple scales – and, moreover, to do this in a way that allows ‘restocking’ of the healing agents over time,” she added.

Mechanical damage can cause cracks, allowing water to seep in; freezing and thawing can then force the cracks wider. Loss of calcium in the concrete into the water can leave decalcified areas brittle.  And, if fractures are deep enough to allow water to reach the reinforcing steel bars, then corrosion and disintegration spell the end for the structure.

The team in Cambridge is addressing damage at the nano/microscale by developing innovative microcapsules containing a cargo of mineral-based healing agent. It’s like having a first-aid kit in a bubble: the idea is that physical and chemical triggers will cause the capsules to break open, releasing their healing and sealing agents to repair the lesion.

“While various cargo and shell materials have been developed for other applications, from food flavouring and pharmaceuticals to cosmetics and cleaning products, they are not generally applicable to cement-based matrices and are far too expensive for use in concrete, which is why we have needed to develop our own,” explained Al-Tabbaa.

Another challenge is to make sure the capsules will be strong enough to withstand being mixed in a cement mixer, yet fragile enough to be broken open by even the smallest of fractures. Innovative capsule production techniques are being investigated that can be scaled up to deliver the huge volumes of capsules required for use in construction.

In parallel, the team in Bath is investigating healing at the mid-range micro/mesoscale with spore-forming bacteria that act as tiny mineral-producing factories, feeding on nutrients added to the cement and facilitating calcite precipitation to plug the cracks in the concrete. Different techniques for housing and protecting the bacteria and nutrients within the cement matrix are being investigated, including the capsules that are being developed at Cambridge.

The University of Cardiff researchers are engineering ‘shape memory’ plastic tendons into the cement matrix to close large cracks at the larger meso/macroscale through triggering of the shrinkage of the tendons by heat.

The project team are then collectively addressing repeated damage through the creation of vascular networks of hollow tubes, like the circulatory system of a living organism, so that self-healing components can continually be replenished.

As the Cambridge researchers move closer to the best formulations for the microcapsules, they have begun collaborating with companies who can scale up the production to the levels required to seed tonnes of cement. Meanwhile, the three research groups are also beginning to test combinations of each of their techniques, to find the best recipe for maximum self-healing capability.

By the summer of 2015, with the help of industrial partners, field trials will test and refine the most promising combined systems in a range of real environments and real damage scenarios. This will include testing them in non-structural elements in the Department of Engineering’s new James Dyson Building.

“This is when it will become really exciting,” said Al-Tabbaa. “To be truly self-healing, the concrete needs to be responsive to the inherently multi-dimensional nature of damage, over long time scales. We want concrete to be a material for life that can heal itself again and again when wounded.” 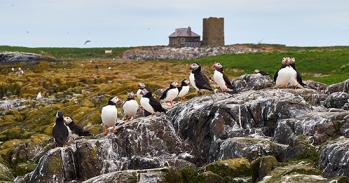