And the Oscar goes to...

French silent film The Artist won best picture at Sunday night's Academy Awards. Chris O’ Rourke from the Faculty of English looks at the resurgence of interest in silent cinema, and discusses his research on the acting styles of early film to which The Artist pays homage.

For those of us who research early film history, the success of The Artist is reason to celebrate.

The success of Michel Hazanavicius’s film The Artist has taken many people by surprise. As a black-and-white French melodrama about silent filmmaking, made in the style of a silent film, it goes against the grain of much contemporary box office fare. If it does as well at this year’s Academy Awards as some commentators predict, it will be the first silent film to take home the top honours since the very first Oscars ceremony in 1929.

For those of us who research early film history, the success of The Artist is reason to celebrate. The film has undoubtedly touched a nerve with contemporary audiences – whether out of a nostalgic longing for ‘simpler’ kinds of cinema, or because we (like the characters in Hazanavicius’s film) are going through our own period of media change and uncertainty, as the rise of digital technologies and the current trend for 3D films seems to suggest.

But can The Artist really herald the return of the silent movie as a commercial prospect? Ultimately, this will depend on how far studio executives and cinemagoers are prepared to experiment. However, it is safe to say that a new silent cinema would be very different from the old one.

As my research shows, silent film conventions, of the sort that The Artist engages with, were shaped not only by technological necessity – that is, the difficulty of recording and synchronising sound – but also by a whole range of cultural and historical factors from outside the film studio. Early filmmakers and film viewers were influenced by their experiences of the theatre, the music hall, the magic lantern, and other contemporary art forms, as well as by their expectations of what moving-picture technology could do. To use a phrase favoured by recent cultural theorists, silent film developed in a ‘media landscape’ that was very different from our own.

Film conventions also changed dramatically over the silent era, a period which lasted more than thirty years, from the mid-1890s to the end of the 1920s. My research focuses on changing attitudes towards film acting in Britain during this time. To take film acting as an example, we can see that the kinds of performances captured by the movie camera in, say, 1900, are (on the whole) very different to those recorded ten or twenty years later.

The Artist takes its cue from films made during the late-silent period at the end of the 1920s. By this point, filmmakers and film actors had already started to poke fun at the performance styles practised a decade or so earlier. The British film about filmmaking, Shooting Stars (1928), for instance, contains some fantastically cutting portraits of acting styles deemed too exaggerated or too melodramatic to be convincing to its own, more modern audience.

Even the words that people used to describe film actors changed over the course of the silent period. In the British material I have been looking at (newspapers, film trade journals, fan magazines), people often applied quite different and sometimes unexpected names to the film actor, ranging from ‘bioscope model’ (‘bioscope’ being an early name for the moving-picture camera) to ‘photoplayer’, depending on when and where they were writing.

Styles of silent filmmaking and film acting also varied considerably across different national cinemas and different film genres. The Artist plays wittily with this sense of variety. Consider the scene in which the Hollywood star George Valentin (Jean Dujardin) first acts opposite the newcomer Peppy Miller (fellow Oscar nominee Bérénice Bejo). As the camera begins to roll on the set of George’s latest production, the actor transforms himself from off-screen joker to the debonair leading man of an action movie, straightening his back, pursing his lips, and raising a suspicious eyebrow.

Early handbooks to film acting, aimed at would-be George Valentins, had a word for this kind of stock posing: ‘registering’. As the British film actor Aurèle Sydney explained in a handbook from 1919, ‘the word “register” is a technical term denoting the retention of any facial expression, such as surprise, delight and disappointment’.

Acting guides often told aspiring film actors to practise ‘registering’ at home. One such guide, written by the British screenwriter William J. Elliott, told readers in 1917 that they should stand in front of a mirror, ‘and practise “registering” the various common emotions – surprise, gladness, sorrow, grief, anger, disappointment, etc.’, until they could express any single emotion at will.

The advice given in such handbooks should probably be taken with a pinch of salt. After all, performances were rarely (if ever) as precise or straightforward as early acting manuals tended to imply. One only has to look to the winners of the first Academy Awards for Best Actor and Actress in 1929, Emil Jannings and Janet Gaynor, or to any number of other early film stars, to see the range and complexity of the acting styles visible in silent films.

Nevertheless, acting handbooks, and other sources like it, suggest that there were some generally understood conventions for the way silent film performances worked – conventions that have, understandably, fallen away since the advent of the ‘talkies’. The story told by The Artist, of actors whose careers were made or broken by the coming of synchronised sound, is only the half of it. The introduction of sound altered almost every aspect of the medium, from the way directors were able to move the camera, to the role of music (a crucial component of the ‘silent’ screen), to the cinema’s relationship with other forms of entertainment, like theatre and radio.

But, despite the different context within which they developed, silent films can still speak to us. The popular success of The Artist is a case in point. And, with a growing number of silent films available on DVD, and more and more silent film screenings organised each year, there is plenty of opportunity to rediscover the pleasures and peculiarities of silent films, whether or not Hollywood attempts to stage a comeback on their behalf. 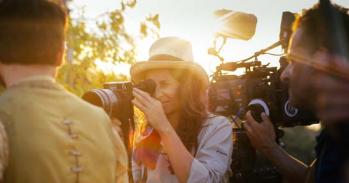