Why Spider-Man can’t exist: Geckos are ‘size limit’ for sticking to walls

Latest research reveals why geckos are the largest animals able to scale smooth vertical walls – even larger climbers would require unmanageably large sticky footpads. Scientists estimate that a human would need adhesive pads covering 40% of their body surface in order to walk up a wall like Spider-Man, and believe their insights have implications for the feasibility of large-scale, gecko-like adhesives.

If a human wanted to climb up a wall the way a gecko does, we’d need impractically large sticky feet – and shoes in European size 145

A new study, published today in PNAS, shows that in climbing animals ranging in size from mites to geckos, the percentage of body surface covered by adhesive footpads increases as body size increases, setting a limit to the size of animal using this strategy because larger animals would require impossibly big feet.

Dr David Labonte and his colleagues in the University of Cambridge’s Department of Zoology found that tiny mites use approximately 200 times less of their body surface area for adhesive pads than geckos, nature's largest adhesion-based climbers. And humans? We’d need as much as 40% of our total body surface, or roughly 80% of our front, to be covered in sticky footpads if we wanted to do a convincing Spider-Man impression.

Once an animal is so big that a substantial fraction of its body surface would need to be sticky footpads, the necessary morphological changes would make the evolution of this trait impractical, suggests Labonte.

“If a human, for example, wanted to climb up a wall the way a gecko does, we’d need impractically large sticky feet – and shoes in European size 145 or US size 114,”says Walter Federle, senior author also from Cambridge’s Department of Zoology. 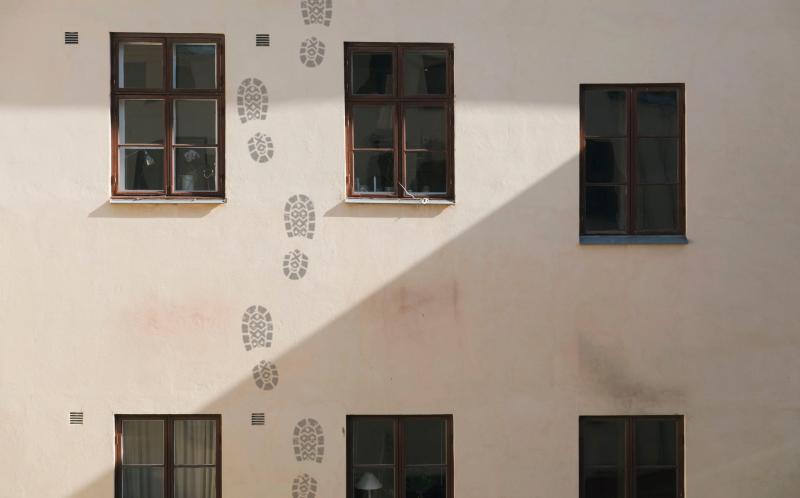 “As animals increase in size, the amount of body surface area per volume decreases – an ant has a lot of surface area and very little volume, and an elephant is mostly volume with not much surface area” explains Labonte.

“This poses a problem for larger climbing animals because, when they are bigger and heavier, they need more sticking power, but they have comparatively less body surface available for sticky footpads. This implies that there is a maximum size for animals climbing with sticky footpads – and that turns out to be about the size of a gecko.”

The researchers compared the weight and footpad size of 225 climbing animal species including insects, frogs, spiders, lizards and even a mammal.

“We covered a range of more than seven orders of magnitude in body weight, which is roughly the same weight difference as between a cockroach and Big Ben” says Labonte.

“Although we were looking at vastly different animals – a spider and a gecko are about as different as a human is to an ant – their sticky feet are remarkably similar,” says Labonte.

“Adhesive pads of climbing animals are a prime example of convergent evolution – where multiple species have independently, through very different evolutionary histories, arrived at the same solution to a problem. When this happens, it’s a clear sign that it must be a very good solution.”

There is one other possible solution to the problem of how to stick when you’re a large animal, and that’s to make your sticky footpads even stickier.

“We noticed that within some groups of closely related species pad size was not increasing fast enough to match body size yet these animals could still stick to walls,” says Christofer Clemente, a co-author from the University of the Sunshine Coast.

“We found that tree frogs have switched to this second option of making pads stickier rather than bigger. It’s remarkable that we see two different evolutionary solutions to the problem of getting big and sticking to walls,” says Clemente.

“Across all species the problem is solved by evolving relatively bigger pads, but this does not seem possible within closely related species, probably since the required morphological changes would be too large. Instead within these closely related groups, the pads get stickier in larger animals, but the underlying mechanisms are still unclear. This is a great example of evolutionary constraint and innovation.”

The researchers say that these insights into the size limits of sticky footpads could have profound implications for developing large-scale bio-inspired adhesives, which are currently only effective on very small areas. 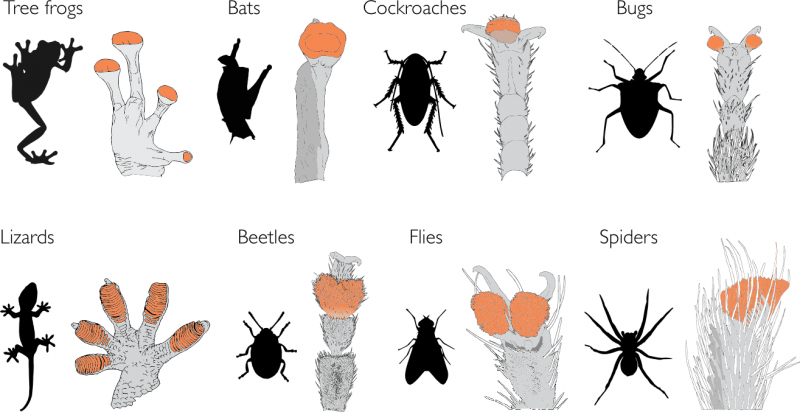 “Our study emphasises the importance of scaling for animal adhesion, and scaling is also essential for improving the performance of adhesives over much larger areas. There is a lot of interesting work still to be done looking into the strategies that animals use to make their footpads stickier - these would likely have very useful applications in the development of large-scale, powerful yet controllable adhesives,” says Labonte.