A virtual reality journey through a cancer cell new

Cambridge scientists have received two of the biggest funding grants ever awarded by Cancer Research UK, with the charity set to invest £40 million over the next five years in two ground-breaking research projects in the city.

This is an enormous challenge. I liken it to the idea of putting a man on Mars – there’s so much technology that you have to develop to do it. All sorts of things are happening in tumours that we can’t study using the technology we have

The funding will come from the first Cancer Research UK Grand Challenge awards – set up to help scientists solve some of the hardest unanswered questions in cancer research, and to revolutionise the prevention, diagnosis and treatment of cancer.

Professor Greg Hannon will lead a team at the Cancer Research UK Cambridge Institute, part of the University of Cambridge. Working with researchers in America, Switzerland, Canada and Ireland, they aim to build 3D versions of breast tumours, which can be studied using virtual reality, allowing scientists and doctors to study every cell and aspect of a tumour in unprecedented detail.

This new way of studying breast cancer could change how the disease is diagnosed, treated and managed. The virtual reality experience will include a ‘superman mode’ which will allow users to fly inside the tumour, point at every cell and find out exactly what kind of cell it is and what it’s doing.

Professor Hannon said: “This is an enormous challenge. I liken it to the idea of putting a man on Mars – there’s so much technology that you have to develop to do it. All sorts of things are happening in tumours that we can’t study using the technology we have. But with our project, we hope to change that.

“We want to create an interactive, faithful, 3D map of tumours that can be studied in virtual reality that scientists can ‘walk into’ and look at it in great detail. By doing this, we could learn more about tumours and begin to answer questions that have eluded cancer scientists for many years." 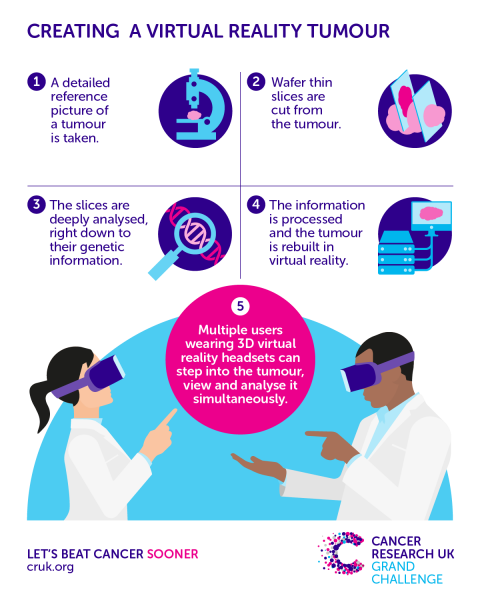 At the Wellcome Trust Sanger Institute, Professor Sir Mike Stratton will lead a team aiming to build a deeper understanding of what causes cancer.

There are at least 50 cancer-associated mutational fingerprints but researchers only know what causes around half of them. Professor Stratton’s team hope to fill in the missing gaps and determine the as yet unknown causes of cancer.

They’ll do this by studying 5,000 pancreatic, kidney, oesophageal and bowel cancer samples, which come from five continents. This will generate as much cancer DNA sequence data as the whole world has produced so far. This work could help prevent more cancers and reduce the global burden of the disease.

Professor Stratton said: “The main aim of our Grand Challenge is to understand the causes of cancer. Every cancer retains an archaeological trace, a record in its DNA, of what caused it. It’s that record that we want to explore to find out what caused the cancer.

“We’re going to sequence the DNA of thousands of cancer samples that have been collected from many different countries around the world, and study them to see what archaeological trace they contain. By doing this, we hope to figure out what caused those cancers.

“The thing that’s really exciting me is the challenge of making it all happen. And I’m looking forward to seeing the answers this work brings.”

The Cambridge projects were selected by an international panel of experts from a shortlist of nine exceptional, multi-disciplinary collaborations from universities, institutes and industry across the globe.

Sir Harpal Kumar, Cancer Research UK’s chief executive, said: “Cancer Research UK set up the Grand Challenge awards to bring a renewed focus and energy to the fight against cancer. We want to shine a light on the toughest questions that stand in the way of progress. We’re incredibly excited to be able to support these exceptional teams as they help us achieve our ambition.

“Cancer is a global problem, and these projects are part of the global solution. Together, we will redefine cancer – turning it from a disease that so many people die from, to one that many people can live with. We will reduce the number of people worldwide affected by cancer and achieve our goal of beating cancer sooner.”

Adapted from a press release by Cancer Research UK