New findings show that much of the mineral from which bone is made consists of ‘goo’ trapped between tiny crystals, lubricating and allowing movement. It is this flexibility that stops bones from shattering.

It's this layered structure that's been missing from our knowledge, and we can now see that without it you're stuffed

Latest research shows that the chemical citrate – a by-product of natural cell metabolism – is mixed with water to create a viscous fluid that is trapped between the nano-scale crystals that form our bones.

This fluid allows enough movement, or 'slip', between these crystals so that bones are flexible, and don't shatter under pressure. It is the inbuilt shock absorber in bone that, until now, was unknown.

If citrate leaks out, the crystals – made of calcium phosphate – fuse together into bigger and bigger clumps that become inflexible, increasingly brittle and more likely to shatter. This could be the root cause of osteoporosis.

The team from Cambridge’s Department of Chemistry and Advanced Imaging Centre used a combination of NMR spectroscopy, X-ray diffraction, imaging and computational modelling with the Department of Physics and Astronomy at UCL to reveal the citrate layers in bone.

They say that this is the start of what needs to be an entire shift in focus for studying the cause of brittle bone diseases like osteoporosis, and bone pathologies in general. The study is published today in the journal Proceedings of the National Academy of Sciences.

"Bone mineral was thought to be closely related to this substance called hydroxyapatite. But what we've shown is that a large part of bone mineral – possibly as much as half of it in fact – is made up of this goo, where citrate is binding like a gel between mineral crystals," said Dr Melinda Duer, who led the study.

"This nano-scopic layering of citrate fluid and mineral crystals in bone means that the crystals stay in flat, plate-like shapes that have the facility to slide with respect to each other. Without citrate, all crystals in bone mineral would collapse together, become one big crystal and shatter.

"It's this layered structure that's been missing from our knowledge, and we can now see that without it you're stuffed."

Duer compares it to two panes of glass with water in the middle, which stick together but are able to slide: "it's the same thing in these flat bone crystals. But you've got to have something that keeps the water there, stops it from drying out and stops the plates from either flying apart or sticking fast together. We now know that thing is citrate."

Citrate is a 'spidery' molecule with four arms, all of which can bond easily to calcium – which bone is packed with, explains Duer. This means that citrate can hold the mineral crystals together at the same time as preventing them from fusing, while trapping the water that allows for the slippery movement which provides bone flexibility. "Without citrate, water would just flow straight through these gaps," she said.

The body actually delivers bone calcium wrapped in citrate, to prevent it fusing with phosphate and forming large solid – and brittle – mineral crystals in the wrong places. Bone tissue has a protein mesh with holes where the calcium is deposited. In healthy tissue, the holes are very small, so that when the calcium is deposited, the citrate that comes with it can't escape and is trapped between crystals – creating the flexible layers of fluid and bone plates.

As people age or suffer repeated bone trauma, the protein mesh isn't repaired so well by the cells that try to replace damaged tissue, but often end up chewing away tissue faster than it can be re-deposited. This causes progressively larger holes in the protein mesh, citrate fluid escapes and crystals fuse together.

What happens then is pure chemistry, says Duer, with little biological control.

The body instigates a form of biological control through the tiny holes in the protein mesh that trap the citrate fluid, along with other molecules that normally control the deposit of mineral. These small spaces force the molecules to be involved with the forming mineral, controlling the process. But if you haven't got the confined space the chemical reactions spiral out of control.

"In the bigger holes in damaged tissue, pure chemistry takes over. Pretty much the moment calcium and phosphate touch, they form a solid. You end up with these expanding clumps of brittle crystal, with water and citrate relegated to the outside of them," she said.

"In terms of chemistry, that solid clump of mineral is the most stable structure. Biomechanically, however, it's hopeless – as soon as you stand on it, it shatters. If we want to cure osteoporosis, we need to figure out how to stop the bigger holes forming in the protein matrix."

The study is the first in a series of findings, with other studies from the team's work on bone chemistry expected to come out later in the year.

The new view of bone 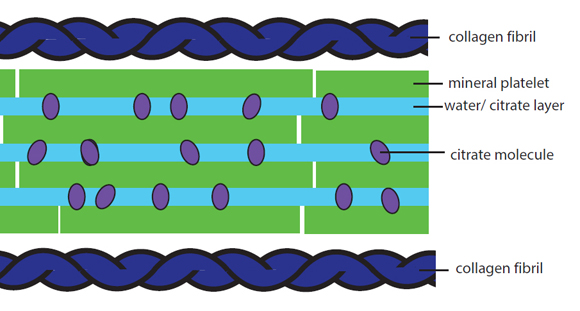