New research provides revelations about the most energetic event in the universe — the merging of two spinning, orbiting black holes into a much larger black hole.

An international team of astronomers, including from the University of Cambridge, have found solutions to decades-old equations describing what happens as two spinning black holes in a binary system orbit each other and spiral in toward a collision.

The results, published in the journal Physical Review Letters, should significantly impact not only the study of black holes, but also the search for elusive gravitational waves – a type of radiation predicted by Einstein’s theory of general relativity – in the cosmos.

Unlike planets, whose average distance from the sun does not change over time, general relativity predicts that two black holes orbiting around each other will move closer together as the system emits gravitational waves.

“An accelerating charge, like an electron, produces electromagnetic radiation, including visible light waves,” said Dr Michael Kesden of the University of Texas at Dallas, the paper’s lead author. “Similarly, any time you have an accelerating mass, you can produce gravitational waves.”

The energy lost to gravitational waves causes the black holes to spiral closer and closer together until they merge, which is the most energetic event in the universe, after the big bang. That energy, rather than going out as visible light, which is easy to see, goes out as gravitational waves, which are much more difficult to detect.

Optical telescopes can capture photos of visible objects, such as stars and planets, and radio and infrared telescopes can reveal additional information about invisible energetic events. Gravitational waves would provide a qualitatively new medium through which to examine astrophysical phenomena.

“Using gravitational waves as an observational tool, you could learn about the characteristics of the black holes that were emitting those waves billions of years ago, information such as their masses and mass ratios, and the way they formed” said co-author and PhD student Davide Gerosa, of Cambridge’s Department of Applied Mathematics and Theoretical Physics. “That’s important data for more fully understanding the evolution and nature of the universe.”

Later this year, upgrades to the Laser Interferometer Gravitational-Wave Observatory (LIGO) in the US and VIRGO in Europe will be completed, and the first direct measurements of gravitational waves may be just around the corner. Around the same time, the LISA Pathfinder mission will be launched as a test mission for establishing a gravitational wave detector of unprecedented sensitivity in space.

“The equations that we solved will help predict the characteristics of the gravitational waves that LIGO would expect to see from binary black hole mergers,” said co-author Dr Ulrich Sperhake, who, along with Gerosa, is also a member of Cambridge’s Centre for Theoretical Cosmology. “We’re looking forward to comparing our solutions to the data that LIGO collects.”

The equations the researchers solved deal specifically with the spin angular momentum of binary black holes and a phenomenon called precession.

“Like a spinning top, black hole binaries change their direction of rotation over time, a phenomenon known as procession,” said Sperhake. “The behaviour of these black hole spins is a key part of understanding their evolution.”

Just as Kepler studied the motion of the earth around the sun and found that orbits can be ellipses, parabola or hyperbolae, the researchers found that black hole binaries can be divided into three distinct phases according to their rotation properties. 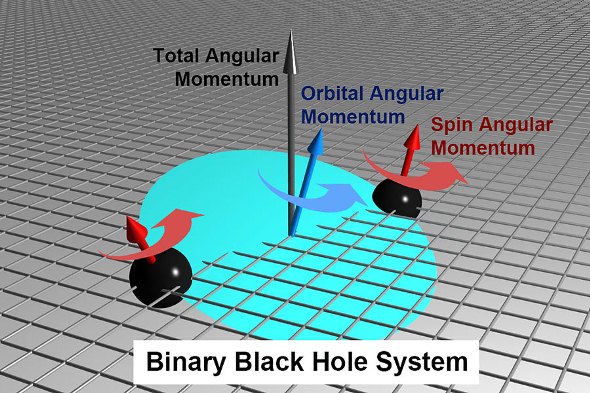 The researchers also derived equations that will allow statistical tracking of such spin phases, from black hole formation to merger, far more efficiently and quickly than was possible before.

“With these solutions, we can create computer simulations that follow black hole evolution over billions of years,” said Kesden. “A simulation that previously would have taken years can now be done in seconds. But it’s not just faster. There are things that we can learn from these simulations that we just couldn’t learn any other way.”

“With these tools, new insights into the dynamics of black holes will be unveiled,” said Gerosa. “Gravitational wave signals can now be better interpreted to unveil mysteries of the massive universe.”

Inset image: Illustration of two rotating black holes in orbit. Both, the black hole spins (red arrows) and the orbital angular momentum (blue arrow) precess about the total angular momentum (grey arrow) in a manner that characterizes the black-hole binary system. Gravitational waves carry away energy and momentum from the system and the orbital plane (light blue) tilts and turns accordingly. Credit: Graphic by Midori Kitagawa

Adapted from University of Texas at Dallas press release.