The way a common virus hijacks the cell it infects could hold the clue to combating Parkinson's disease.

With recent funding from the Michael J Fox Foundation for Parkinson’s Research, Professor Sinclair’s group is now investigating how to translate the basic virological function discovered in HCMV into a novel therapeutic.

Parkinson’s disease (PD) is one of the most common neurodegenerative diseases in the elderly population. Usually diagnosed after the age of 50, PD has a prevalence that is rising as the average population age increases, with about 120,000 people currently affected in the UK. The disease results from loss of the cells that produce dopamine, a chemical that relays signals from one neuron to another in the brain. Without this neurotransmitter, debilitating neurological symptoms ensue, including impaired walking, talking, swallowing and speech.

Although the processes leading to neuronal death in PD are not fully understood, indications from experiments with neurotoxins point towards a role for mitochondria, the energy-producing powerhouses of cells. It seems likely that the neuronal cell death and degeneration of neurological functions are a result of impaired mitochondrial function, particularly of an enzyme known as Complex I that provides the first step in the chain that coverts food energy into chemical energy.

Cell death isn’t always a bad thing. Timely and regulated cell death is crucial for the correct development of some tissues and is also an important defence mechanism against invading pathogens. For this reason, many viruses have evolved ways to keep cells alive until the viral replication cycle is completed. Human cytomegalovirus (HCMV), a type of herpesvirus, is an expert at this. Because HCMV needs 4–5 days to complete its replication cycle, it encodes several pro-life genes that hijack cellular functions to keep the cell alive throughout the stresses of the infection cycle. 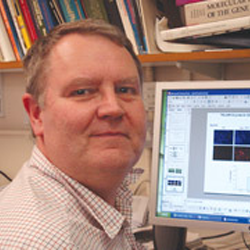 Molecular virologists in Professor John Sinclair’s group in the Department of Medicine have long been interested in the machinations of this virus. Recent research took a surprising turn when they discovered that one product of HCMV – a piece of ribonucleic acid (RNA) that doesn’t even encode a protein – targets mitochondria and protects Complex I from stress-induced dysfunction. Could this viral RNA protect neuronal cells from the type of neurodegeneration observed in PD?

With recent funding from the Michael J Fox Foundation for Parkinson’s Research, Professor Sinclair’s group is now investigating how to translate the basic virological function discovered in HCMV into a novel therapeutic.

Experiments are being designed in collaboration with Dr Roger Barker and Professor Maria Grazia Spillantini at the Cambridge Centre for Brain Repair, part of the Department of Clinical Neurosciences, with the aim of preventing neurodegeneration in models of PD by delivering the viral RNA directly to the brain. Such approaches are difficult as the brain is protected by the blood–brain barrier, which restricts the passage of various chemicals and microscopic objects (such as bacteria) from the blood to the brain. However, some viruses such as rabies are not only able to overcome this barrier but can also specifically target neuronal cells by expressing a protein that binds to them; even a small polypeptide fragment of this protein is sufficient.

The researchers have generated a complex comprising the HCMV RNA and the rabies polypeptide, and results are already indicating that it protects neuronal cells in the Petri dish from cell death. By engineering this polypeptide to bind RNA even more tightly, the hope is that it might deliver its RNA cargo to the brain after injection into the bloodstream. This would be a fascinating example of translational biology – taking observations of the basic molecular analysis of virus infection and extending them to therapeutic solutions for neurodegeneration.

For more information, please contact the author Professor John Sinclair (js@mole.bio.cam.ac.uk) at the Department of Medicine. Part of this research was published in Science (2007) 316, 1345–1348.

The climate crisis: towards zero carbon