A centrepiece building for exploratory ‘blue skies’ research and industrial partnerships in the physical sciences will be created at the University of Cambridge to investigate new approaches to fundamental science and to solving global challenges, such as natural resource demand.

This will not be conventional research or ‘business as usual’, but a major effort to go beyond the boundaries of traditional physical science concepts

Combined government and business funding of £63 million has been announced today for the creation of a new centre at the Cavendish Laboratory on the West Cambridge site dedicated to world-class research in the physical sciences, and how it translates to industry.

Leading scientists backing the centre believe it will bring forward the scale of industrial engagement in West Cambridge “by a decade” for the benefit of British industry, economy and “society in general”.

The centre will build on the innovative activity currently supported by the Winton Programme for the Physics of Sustainability at Cambridge’s Cavendish Laboratory, where the focus has been on truly original, risk-taking science since its inception in March 2011, emphasising fundamental physics research relevant to areas such as renewable energy – including photovoltaics and electrical storage.

The new facilities will see research scientists from industry occupying laboratory and desk space alongside the Cambridge research groups, with the aim of engendering a two-way flow of ideas and exposing the best early career researchers in academe and industry to scientific problem-solving that relates directly to industrial need.

Funding for the project from the non-governmental sector was raised partly through philanthropic gifts from the Winton programme, Hitachi Ltd., Toshiba Ltd., the Wellcome Trust, the Raymond and Beverly Sackler Foundation and Tata Steel. These contributions were doubled by industrial contracts with a very wide range of industries, including those collaborating with cognate departments such as Materials Science and Chemistry. The Higher Education Funding Council for England (HEFCE) is providing £21m to complement the non-governmental sources of funding for the programme.

Construction work will begin shortly on the Maxwell Centre, provisionally named for the great physicist James Clerk Maxwell, who was appointed the first Professor of Experimental Physics at Cambridge in 1871 and who discovered electromagnetism and founded statistical mechanics, among other insights of genius. The building is due to open its doors in the summer of 2015.

“The Maxwell Centre will be the vehicle for translating ‘blue skies’ research into products of importance for the industrial sector,” said Professor Sir Richard Friend, Cavendish Professor of Physics, who will be the first Director of the Centre.

“This will not be conventional research or ‘business as usual’, but a major effort to go beyond the boundaries of traditional physical science concepts. The key to innovation is an effective bottom-up approach to fundamental research. We will combine work on the specific challenges facing collaborators with research into areas at the edges of current conception – the ‘unknown unknowns’”.

Pioneering research from the Winton programme – established by a £20m donation from David Harding, founder of Winton Capital Management – will be able to flourish in the Maxwell Centre. This will include work on quantum-level modelling of biological systems such as avian navigation and photosynthesis in deep-sea bacteria to enhance energy efficiency, and the new physics of materials that could harness superconductivity to revolutionise battery life.

Many other aspects of fundamental physics will be fostered, including advanced scientific computing, the theory of condensed matter, advanced materials and the physics of biology and medicine. 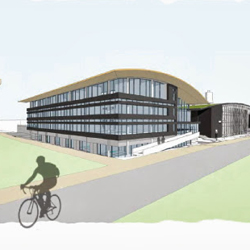 This will be balanced with embedded industrial partners in the Centre and graduate programmes designed to prepare students for the challenges of research and development in industry, attracting increasing investment and creating “cohorts of graduate students prepared for employment in high-tech industries,” said Friend.

“Many of the most exciting and unexpected research opportunities lie at the interface between academia and industry, it is genuinely a two-way process. Many innovations in science, designed to solve pure science problems, are applied in quite different areas - often those of greatest interest to industry.”

George Osborne, Chancellor of the Exchequer, said: "By bringing together our Nobel Prize winning scientists, our world-class companies and our entrepreneurial start-ups, we can drive innovation and create the economic dynamism Britain needs, using public money to secure private investment so our world-class science also delivers jobs and growth.”

David Willetts, Minister for Universities and Science, said he believes this project will “not only deliver new knowledge and applications for industry, but will accelerate growth and foster innovation between the research base and business, keeping the UK ahead in the global race.”

Professor Sir Leszek Borysiewicz, Vice Chancellor of the University of Cambridge, said: "The University has already invested very heavily to build up our research base on the West Cambridge science and technology campus, and through the Maxwell Centre, we will capitalise on this resource by embedding industrial engagement still further into the University.”

“Links between new science and real applications are very well established in the Physical Sciences. This is evident from the very large and diverse set of industrial partners who are co-investors in the Maxwell Centre. We are determined that the Maxwell Centre will be the centrepiece for a very substantial growth in our industrial engagement in the Physical Sciences. This builds on real excellence in research, an outstanding student base and very strong and enthusiastic collaborations with a broad range of industries.”

Subject to planning permission, the Maxwell Centre will be located between the Physics of Medicine building and the William Gates building – home of the Computer Laboratory – on the 20-acre West Cambridge site, and will house around 230 people in the first instance, with research laboratories complemented by seminar rooms, interactive spaces and dedicated hubs for industrial partners. This new building is part of the Cavendish Laboratory’s long-term development programme.

Professor Malcolm Longair, former Head of the Cavendish and its current Development Director, added that he hopes to confirm the Centre’s name soon as a fitting tribute to Clerk Maxwell, the physicist of “outstanding genius who was the essential bridge between Newton and Einstein.”

“Maxwell was a truly great figure, and his approach to theoretical and experimental science mirrors exactly what we want to achieve in this new building.”

Architect’s impression of the new Maxwell Centre for physical science research, due to open in summer 2015.