Mindfulness training can help support students at risk of mental health problems, concludes a randomised controlled trial carried out by researchers at the University of Cambridge.

This is, to the best of our knowledge, the most robust study to date to assess mindfulness training for students, and backs up previous studies that suggest it can improve mental health and wellbeing during stressful periods

While the prevalence of anxiety and depression among first year undergraduates is lower than the general population, it increases to overtake this during their second year. The number of students accessing counselling services in the UK grew by 50% from 2010 to 2015, surpassing the growth in the number of students during the same period. There is little consensus as to whether students are suffering more mental disorders, are less resilient than in the past or whether there is less stigma attached to accessing support. Regardless, mental health support services for students are becoming stretched.

Recent years have seen increasing interest in mindfulness, a means of training attention for the purpose of mental wellbeing based on the practice of meditation. There is evidence that mindfulness training can improve symptoms of common mental health issues such as anxiety and depression. However, there is little robust evidence on the effectiveness of mindfulness training in preventing such problems in university students.

“Given the increasing demands on student mental health services, we wanted to see whether mindfulness could help students develop preventative coping strategies,” says Géraldine Dufour Head of the University of Cambridge’s Counselling Service. Dufour is one of the authors of a study that set out to test the effectiveness of mindfulness – the results are published today in The Lancet Public Health.

In total, 616 students took part in the study and were randomised across two groups. Both groups were offered access to comprehensive centralised support at the University of Cambridge Counselling Service in addition to support available from the university and its colleges, and from health services including the National Health Service.

Half of the cohort (309 students) were also offered the Mindfulness Skills for Students course. This consisted of eight, weekly, face-to-face, group-based sessions based on the course book Mindfulness: A Practical Guide to Finding Peace in a Frantic World, adapted for university students. Students were encouraged to also practice at home, starting at eight minute meditations, and increasing to about 15-25 minutes per day, as well as other mindfulness practices such as a mindful walking and mindful eating. Students in the other half of the cohort were offered their mindfulness training the following year.

The researchers assessed the impact of the mindfulness training on stress (‘psychological distress’) during the main, annual examination period in May and June 2016, the most stressful weeks for most students. They measured this using the CORE-OM, a generic assessment used in many counselling services.

The mindfulness course led to lower distress scores after the course and during the exam term compared with students who only received the usual support. Mindfulness participants were a third less likely than other participants to have scores above a threshold commonly seen as meriting mental health support. Distress scores for the mindfulness group during exam time fell below their baselines levels (as measured at the start of the study, before exam time), whereas the students who received the standard support became increasingly stressed as the academic year progressed.

The researchers also looked at other measures, such as self-reported wellbeing. They found that mindfulness training improved wellbeing during the exam period when compared with the usual support.

“This is, to the best of our knowledge, the most robust study to date to assess mindfulness training for students, and backs up previous studies that suggest it can improve mental health and wellbeing during stressful periods,” says Dr Julieta Galante from the Department of Psychiatry at Cambridge, who led the study.

“Students who had been practising mindfulness had distress scores lower than their baseline levels even during exam time, which suggests that mindfulness helps build resilience against stress.”

Professor Peter Jones, also from the Department of Psychiatry, adds: “The evidence is mounting that mindfulness training can help people cope with accumulative stress. While these benefits may be similar to some other preventative methods, mindfulness could be a useful addition to the interventions already delivered by university counselling services. It appears to be popular, feasible, acceptable and without stigma.”

The team also looked at whether mindfulness had any effect of examination results; however, their findings proved inconclusive.

The research was supported by the University of Cambridge and the National Institute for Health (NIHR) Collaboration for Leadership in Applied Health Research and Care East of England, hosted by Cambridgeshire and Peterborough NHS Foundation Trust. 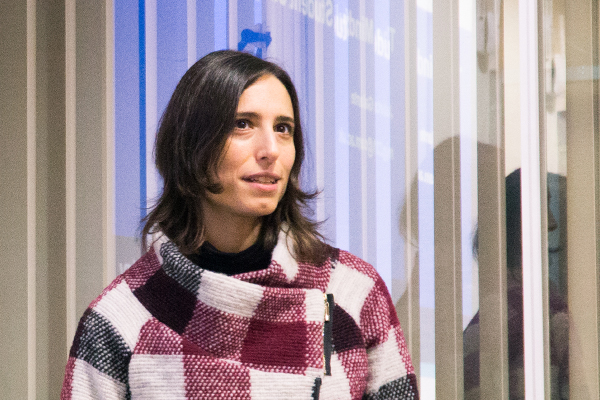 Dr Julieta Galante is a research associate in the Department of Psychiatry. Her interests lie in mental health promotion, particularly the effects of meditation on mental health. She hopes to contribute to the growing number of approaches to preventing mental health problems that do not rely on medication.

“What fascinates me is the idea that you could potentially train your mind to improve your wellbeing and develop yourself as a person,” she says. “It’s not the academic type of mind-training –meditation training is more like embarking on a deep inner-exploration.”

Galante’s research involves studying large numbers of people in real-world settings, such as busy students revising for their exams. It’s a very complex research field, she says: there are many factors, social, psychological and biological, that contribute to an individual’s mental health.

“Our projects are most successful (and enjoyable) when we collaborate with people outside the academic sphere, in this particular project with the Student Counselling Service, University authorities, and the students themselves.”

The mindfulness trial was ‘blinded’, meaning that the researchers did not know which students (and hence which data) belonged to which group. The ‘unblinding’ of the results – when they found out whether their trial was successful – was nerve-wracking, she says. “The team statistician didn’t know which group had received mindfulness training and which group was the control. He showed his results to the rest of the team and we could all see that there was a clear difference between the groups, but we didn’t know whether this meant really good or really bad news for mindfulness training. When the results were then unveiled, we all laughed with relief!”