Scientists have used emerging proteomic techniques to find traces of ancient vaginal fluid, honey and milk on a rare manuscript from the late 15th century.

Researchers have found direct evidence that a 500-year-old manuscript was worn during childbirth by using 'biomolecular analysis' to detect ancient proteins from cervico-vaginal fluid within the weave of the parchment.

The medieval 'birthing girdle', now part of the Wellcome Collection, dates from around 1500, and is a rare example of the kind of talisman or relic that was offered to anxious pregnant women by the Pre-Reformation English Church.

Childbearing in medieval Europe was perilous, with risks ranging from uterine prolapse to postpartum infection. Complications during or resulting from labour caused a high death toll among women: neonatal mortality rates of the time for mother and child together are estimated to have been 30 to 60 percent.

Made from materials such as silk, paper and parchment, and inscribed with prayers and invocations for safe delivery, birthing girdles were one of the most common spiritual charms loaned out by monasteries to their parishioners.

Talismanic items such as girdles, designed to secure assistance from divine and supernatural forces, were targeted for destruction during the Dissolution of the Monasteries, which began in 1536 under King Henry VIII. The stained, three-metre-long sheepskin scroll now held by Wellcome (MS.632) is one of the few birthing girdles that survived.

Despite a ban on girdles by bishops in the wake of the Reformation, women were known to have used them surreptitiously up until the early 17th century, and this may have been one of the clandestine birthing girdles that remained in circulation.

A research team led by Dr Sarah Fiddyment of the McDonald Institute of Archaeological Research at the University of Cambridge used erasers to delicately rub the fragile parchment and collect tiny crumbs of material without damaging the artefact. They then analysed and extracted proteins from these granules.

The proteomic analysis used by Fiddyment and colleagues, a non-invasive sampling technique called eZooms, was originally developed to identify the animal species from which ancient parchments were made. Their findings have been published in the journal Royal Society Open Science.

Along with a large number of proteins matching cervico-vaginal fluid, indicating that the manuscript was indeed actively worn during labour, the researchers also found various non-human proteins: honey, milk, egg and plants such as broad beans – all of which have been documented in medieval texts as treatments relating to pregnancy and childbirth.

“Although these birth girdles are thought to have been used during pregnancy and childbirth, there has been no direct evidence that they were actually worn until now,” said Fiddyment, lead author of the new study.

“Many contain prayers for general protection of the individual, but this particular girdle also contains very specific prayers to protect women in childbirth and references various saints also related to women and childbirth.”

“This girdle is especially interesting as it has visual evidence of having been used and worn, as some of the images and writing have been worn away through use and it has many stains and blemishes,” Fiddyment said.

Alongside names of apostles and saints associated with childbirth, such as the Saints Julitta and Quiricus, mother and son martyrs, the manuscript also features the assurance that 'yf a woman travell wyth chylde gyrdes thys mesure abowte hyr wombe and she shall be delyvyrs wythowte parelle.' ('If a woman travailing with child girds this measure about her womb, she shall be delivered safely without peril.')

The manuscript's 'severe abrasions' imply that it was often touched or kissed as well as worn, write the researchers. They say that the narrow width of the scroll and the traces of folds suggest it was wrapped around a woman’s body so that particular prayers were strategically placed against the womb.

“We do not know how the girdles were worn, but there are suggestions that due to the dimensions of the object – long and narrow – they were worn like a chastity belt, to help support the pregnant women both physically and spiritually,” said Fiddyment.

The study’s senior author, Professor Matthew Collins, also of the McDonald Institute, said the research highlights the role of proteomics within a new field called 'biocodicology': the study of the biological information stored in ancient manuscripts. 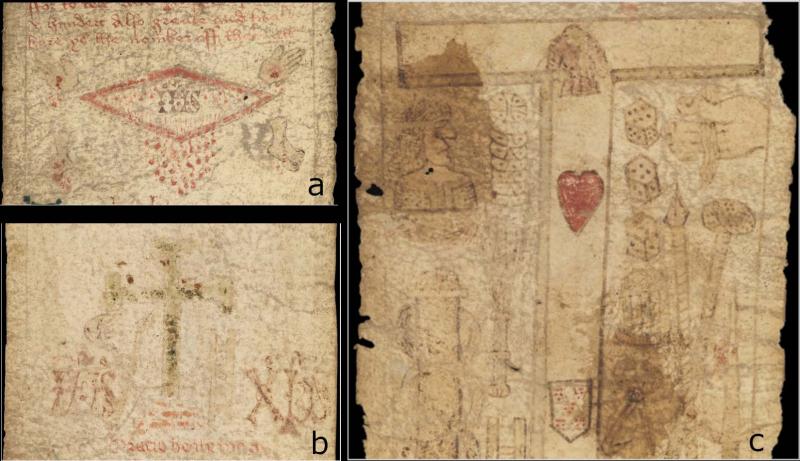