A paper published in today’s Lancet draws attention to the plight of Greece’s most vulnerable groups who are faced with cuts in the healthcare services they need urgently. Lead author Alexander Kentikelenis describes the situation as a “public health tragedy”.

The data reveals that the Greek welfare state has failed to protect people at the time they needed support the most.

Austerity measures in Greece, imposed following a bailout by the international community, have led to devastating social and health consequences for the country’s population, according to a report in yesterday’s Lancet.

Greece’s health crisis: from austerity to denialism, a paper by Cambridge University sociologist Alexander Kentikelenis and colleagues, shows how rising demand for healthcare as a result of the cuts has coincided with a drop in the provision of services, leading to substantial unmet medical need.

In 2010 the Greek government agreed to an austerity package overseen by the European Union, the European Central Bank and the International Monetary Fund, known collectively as the Troika. Since then, Greece has had the largest cutbacks to the health sector seen across Europe, as the bailout package capped public expenditure at 6% of GDP. The country’s public spending on health is now less than any of the other pre-2004 EU members.

“The data reveals that the Greek welfare state has failed to protect people at the time they needed support the most. A rapidly growing number of Greeks are losing access to healthcare as a result of budget cuts and unemployment,” said Kentikelenis.

The authors of the paper acknowledge that Greece’s healthcare system was in need of reorganisation well before its economic plight came to the world’s attention. However, they take the government to task for its denial that the health of the population has been affected as a result of the slashing of budgets.

At a time of increasing health need and falling incomes, Greece’s bailout agreement stipulated shifting the cost of healthcare to patients. The Greek government introduced new charges for visits to outpatient clinics and higher costs for medicines.

The authors’ analysis of the latest available data from the EU Statistics on Income and Living Conditions revealed a 47% rise in people who felt they did not receive medically necessary healthcare. This increase was linked to a rising inability to afford care and the costs of travel to access health services, according to the authors. Rapidly increasing unemployment since 2009 meant a growing number of people no longer had any form of health cover.

“Those without insurance would have been eligible for a basic package of health services after means testing, but the criteria for means testing have not been updated to take account of the new social reality,” said Kentikelenis.

“To respond to unmet need, social clinics staffed by volunteer doctors have sprung up in urban centres. Before the crisis such services mostly targeted immigrant populations, but now as many as half the patients are Greek nationals.”

The health problems are particularly pronounced among Greece’s most vulnerable groups who include the poor, the unemployed, the elderly, pregnant women and children, and those with mental health problems. The paper describes the situation faced by these groups as a “public health tragedy”. 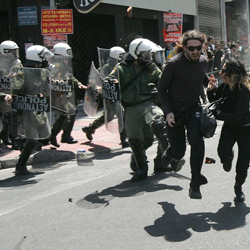 Austerity measures have also been linked to increased incidence of infectious disease. Following cuts to outreach programmes, including the distribution of syringes and condoms to injection-drug users, in the first year of austerity, a rapid rise of HIV infections was observed: from 15 in 2009 to 484 in 2012. The incidence of tuberculosis among drug users more than doubled in 2013.

Kentikelenis and co-authors point to the experiences of other countries – notably, Iceland and Finland – in surviving financial crises. They argue that, by ring-fencing health and social budgets, and concentrating austerity measures elsewhere, governments can offset the harmful effect of crises on the health of their populations.

“Although the Greek healthcare system had serious inefficiencies before the crisis, the scale and speed of imposed change have constrained the capacity of the public health system to respond to the needs of the population at a time of heightened demand,” Kentikelenis said.

For more information about this story contact Alexandra Buxton, Office of Communications, University of Cambridge, amb206@admin.cam.ac.uk  01223 761673

Credit: Both images: Learning to live with the crisis