Gonville & Caius College opened the doors to its brand new student residence and conference centre at 5 West Road this term, marking the most important step in the College’s expansion since 1962.

Gonville & Caius College opened the doors to its brand new student residence and conference centre at 5 West Road this term, marking the most important step in the College’s expansion since 1962.

The new building has been made possible through the generosity of many Caians and friends of the College who have given nearly £10 million to this project over the past three years.

Set next to the College-owned Harvey Court, the site includes 75 en-suite bedrooms as well as the Cavonius Centre which, out of term time, provides a state-of-the-art conference facility. Four large meeting rooms, three smaller rooms, an office, and breakout area are housed in the new centre.

One unique aspect of the new energy-efficient building is its sinuous shape. This was specially designed to ensure that the existing mature trees on the site, including a magnificent Copper Beech, were not disturbed.

The architect for the design was Mark Wilkinson of Donald Insall & Associates, a firm associated with other Gonville & Caius building projects. In 1997 Donald Insall won the European Architectural Heritage Award for their restoration and refurbishment of the Cockerell Building.

Previously, a Victorian villa known as 'L block' had stood on the West Road site and was notable for having housed Caius' most famous fellow, Professor Stephen Hawking, for 15 years.

Gonville Hall was founded in 1348 by Edmund Gonville and moved to its present Old Courts site on Trinity Street in 1353. 200 years later, at the intervention of alumnus John Caius, it was renovated and renamed Gonville & Caius with a new royal charter in 1557.

The 19th and 20th centuries saw the greatest expansion, with a larger hall and new library being added. In 1962 the distinctive three-tiered terraces of Harvey Court were built to cater for the growing student population.

This latest building reflects the College's changing needs for a new century. WiFi technology, the installation of audio and visual equipment, as well as the setting of beautifully landscaped gardens, make 5 West Road an attractive facility for companies looking for conference venues, as well as providing modern accommodation for students.

Laura Oliver, Gonville & Caius' Conference Manager, explained: "This is an exciting time for the College. We are now able to provide superb modern facilities with the latest technology in addition to our stunning traditional rooms on offer in the Old Courts." 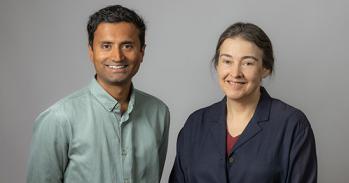