Archaeologists from the Universities of Cambridge and Cardiff are currently undertaking their third, and final, round of excavations at Ham Hill, Britain’s biggest Iron-Age hill fort.

Though Ham Hill was clearly prepared to try and repulse attackers, it was not simply a military hill fort

An excavation at Ham Hill, the largest Iron-Age hill fort in Britain, has revealed more about how the ancient structure was developed by its defenders in response to the Roman invasion.

Researchers have been studying the fort, which covers more than 80 hectares of the Somerset countryside, for the past three years in an attempt to understand more about its function, and how such a large structure was defended by the local population.

The final round of excavations, which are currently being concluded, have focused on its ramparts. In particular the team has concentrated on the final phase of their defensive construction, which occurred towards the end of the Iron Age and was probably a response to the threat posed by the Roman invasion.

This defence consisted of box-revetted stone ramparts, situated on top of previously built, three to four metre-high earthen banks. The existence of these structures does not mean that people in the Iron Age lived in a constant state of warfare; though Ham Hill was clearly prepared to try and repulse attackers, it was not simply a military hill fort. Instead, these ramparts may have been more symbolic than practical, an emblem of defence, the building of which would have helped to foster community spirit and create a collective identity, clearly delineating “us” and “them”.

Despite this, there is obvious evidence of violence and assault in the ramparts – the researchers found defleshed and chopped-up human remains dating back to the time of the Roman Conquest.

Three summers of excavations have provided enormous insight into the previously impenetrable hill fort. Many important and exciting discoveries have been made, such as that of the first “ham stone” house, an Iron Age house built from pieces of local stone. This discovery proved that ham stone was used by builders prior to Roman occupation, and that the Romans were not the first to quarry the site. Other structures found include roundhouses and grain storage pits, dating from the second to first centuries BCE.

Archaeologists have also determined that the hill-top was inhabited from at least Neolithic period up until the time of the Romans, shown from excavated items such as stone implements and early Roman metal items. Early Roman pottery and metalwork have been discovered in the trenches across the ramparts, as have Roman military items, with the latter items in particular suggesting that the Romans garrisoned Ham Hill when initially occupying the South West.

A wide variety of tools and weapons have been unearthed, including a bronze dagger and an iron ballista bolt, as have at least three vessels of Glastonbury Ware pottery. A particularly interesting find has been the Middle Bronze Age ditches used to create a system rectilinear fields and indicating that Ham Hill was full established as a distinct and significant  ‘place’ by that time (c. 1500 BCE).

Archaeological fieldwork has focused mainly on a large rectangular ditched enclosure within the hill fort’s interior; during the course of its excavation, numerous sets of human remains have been discovered, both full skeletons and fragmented bones. The quantity proposes that this enclosure perhaps served as special meeting place for the community, and it has been suggested that the bones were intended to symbolise their ancestors.

Members of the public can see the excavations themselves at an open day on 7 September. Email Hayley Roberts at hr270@cam.ac.uk to arrange a private group tour.

Evidence of a Roman crucifixion found in Cambridgeshire 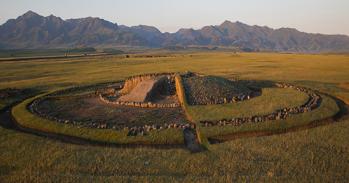