Trilobites are some of the most iconic and recognizable fossils for any palaeontologist. Among the first complex animals, they lasted for over 270 million years and successfully adapted to a world that became more dangerous as predators increased. They were amongst the first sea dwelling creatures to develop ways to protect themselves, and their hard shells meant that their fossilized remains are abundant.

Trilobites’ main defensive strategy was to roll up their bodies, like a modern-day pill woodlouse, presenting potential predators with a heavily armoured shield.
Palaeontologists have not been able to pinpoint when this important strategy originated, and until now it was generally believed that early forms of trilobites in the Cambrian Period - which began 545 million years ago - were simply not able to do it.

But researchers from Cambridge’s Department of Earth Sciences have now discovered that a very early group of trilobites, called olenellids, were able to enrol – despite lacking many of the adaptations present in their younger relatives. This means that one of evolution’s earliest defence mechanisms is in fact slightly over 510 million years old.

During field research in Jasper National park in Alberta, Canada, Javier Ortega-Hernández and his PhD supervisor Nicholas Butterfield came across two specimens that were tiny but highly significant.

“The first specimen is unusual for an olenellid, as the tail covers the underside of the head completely - a typical characteristic of enrolment,” said Ortega-Hernández, who led the research, which is published today in the journal Biology Letters.

“The second shows overlapping segments in the body. Taken together, these are an exciting find, as it is clear evidence that, despite their limitations, olenellids were capable of rolling themselves up effectively”.

The seafloors which the olenellids inhabited were relatively predator free, so a simple ability to curl up would have been enough to avoid being eaten by the jawless fish and other organisms that shared their world, and also as a defence against harmful environments. This was during the “Cambrian Explosion”, when there was a rapid development in the complexity of life on earth.

But, as the evolutionary arms race stepped up over the next several million years, more effective defences were needed, and trilobites developed body segments that slid more easily on top of each other, along with a larger tail shield that could completely cover the soft underside of their heads when they were enrolled. 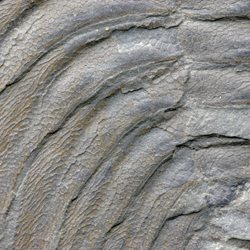 Most effectively of all, later trilobites developed various locking devices in their heads and tails which meant that, once rolled up, their bodies could not be pulled apart or twisted open.

“It’s long been known that trilobites became very efficient at avoiding predators, and the fact that they fossilized easily means that there is rich and abundant record of them in both their outstretched and enrolled states,” said Ortega-Hernández.

“But no-one had ever seen an enrolled fossil of this very early trilobite group known as olenellids, so it was assumed that they did not have enrolling ability at this stage of evolution.

“We now realise that this was because the olenellid’s capacity to enrol was relatively weak, at least compared to younger trilobites, meaning that when they died their muscles would relax and their bodies stretch out again. We needed to find olenellids that had been rapidly buried shortly after death and were still enrolled, and the Mural Formation in Alberta was the perfect place to find them.”

Inset image: The exoskeleton had terrace-like ridges that facilitated a primitive type of enrolment in these early trilobites

Completely enrolled specimen of the olenellid Mummaspis muralensis from the early Cambrian Mural Formation (Jasper National Park, Alberta). This represents the oldest direct evidence of enrolment in the fossil record of polymerid trilobites