“Without paperwork I am nothing. I do not appear to exist”

Researchers from the Institute of Criminology reveal that many women trafficked into the UK who commit crime under duress are imprisoned without support or protection, and call for improved ways to identify the victims among the offenders.

Many of those described as ‘offenders’ will have had little to no choice, and are often victims of crime and horrifying abuse themselves

As the interview with the female prisoner came to a close, the researcher – through a translator – enquired whether she had any questions she would like to ask. The prisoner asked when she was going to be shot.

Trafficked into the UK and then detained for a crime, the woman had spent six months in a UK prison believing herself to be under a death sentence. No one had ensured she understood her situation.

Between 1999 and 2009, the number of foreign nationals in female prisons jumped from 8% to 19%; they had mainly come from countries like Nigeria and Vietnam, and were usually imprisoned as a result of crimes relating to theft, drugs or false documentation.

However, the distinction between ‘victim’ and ‘offender’ in many of these cases is blurred, says criminologist Professor Loraine Gelsthorpe: “many of those described as ‘offenders’ will have had little to no choice, and are often victims of crime and horrifying abuse themselves. Some have been held captive in slavery-like conditions, forced to work as prostitutes or in drug factories – sometimes for years. Some have been raped and beaten, and their documents withheld by criminal gangs.”

“Offenders are assumed to have agency; whereas victims don’t have agency – but those who are trafficked very often have both,” explained Gelsthorpe. “There is a confusion of narratives which the criminal justice system doesn’t know how to respond to.”

Although the UK has a National Referral Mechanism (NRM) for the identification and support of ‘victims’ of trafficking, which was introduced in 2009, Gelsthorpe believes there are major issues around its effectiveness: “there are big questions as to whether the training of first responders – such as police and border agencies, but also third sector organisations – is currently sensitive enough to enable victim identification,” she said.

The new Human Slavery Bill, announced by the Home Secretary at the end of 2013, has pledged to review the NRM process and establish a ‘legal duty’ for first responders to report all suspected cases of human trafficking to the NRM.

Of those interviewed, 43 were found to be victims of trafficking, although only 11 had been processed through the NRM (and, for two of the women, this didn’t happen until after their sentences had been served).

A further 15 women had either entered the UK independently but then worked in slavery-like conditions, or had their documents stolen by those who smuggled them in – a situation that resulted in the crime for which they had been convicted.

The research, funded by the Economic and Social Research Council, culminated in a major report by Gelsthorpe and Hales – The Criminalisation of Migrant Women. It makes for harrowing reading. Research findings are interspersed with testimony from many of the interviewees, giving accounts of the exploitation and abuse they suffered before entering custody.

The women had set out for the UK in the hope of better lives, many believing they had already secured legal work. Among them were women who had been abused, starved and forced into sex work. Routine rape and forced abortion left some with severe internal injuries. Many underwent servitude and imprisonment. Some were victims of war crimes in their homeland, and had witnessed executions of husbands and children.

Once arrested as offenders in the UK, those interviewed spoke of confusion, terror and powerlessness when confronted by the authorities.

Interpreter support and access to documents in languages the women could understand were frequently lacking or limited. Some women spoke of trying to tell the police what had happened, but without being understood or in some cases dissuaded from doing so by their ascribed legal counsel.

During police questioning, fear of traffickers and cartels often prevented full disclosures. One woman explained to police she had been held captive for seven years and forced to work as a prostitute, yet was told her story did not make “a great deal of sense” as she sounded too “sensible”. Another victim of trafficking told police she had been forced to work in a cannabis house but didn’t know the names of those involved: “because of that I do not think they believed me.” She was sentenced to two years.

None of these women knew what the term ‘trafficking’ meant.

“An incoherent story, one that makes police suspicious, might be a result of the trauma the person has experienced,” said Gelsthorpe. “Many NRM assessments are made alongside decisions on asylum, mainly by the immigration department, and the frame of mind is often one of suspicion – the very term ‘asylum seeker’ has been criminalised. There needs to be caution in assessments, but caution is different from suspicion.” 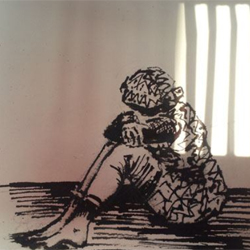 Gelsthorpe describes being amazed that, in some cases, obvious signs of abuse – such as physical scarring – went unrecognised in prisons.

Interviewees spoke of complete disorientation during court proceedings. The process focuses on the offence, and seems to exclude the context in which it took place, write the researchers. One woman described her helplessness in the UK court as “like being in the hands of the people who brought me here.”

Another trafficking victim, arrested for use of a false document, summoned the courage to tell her legal representative all she had suffered. “I am not going to mention to the court that you have worked in sex work as this will not be in your favour,” was the only response.

Many migrant women find themselves trying to survive in a foreign prison without much idea as to how long they will serve and what will happen next, some without knowledge of, or access to, their children for months at a time.

Gelsthorpe and colleagues presented their report to MPs and Peers in the House of Lords in 2013, outlining several policy implications. They recommend training for government agencies based on key ‘indicators’ – such as types of offences – for flagging up trafficked women; interviews should then be carried out by female staff with interpreting support, to investigate human rights abuses.

“Some relatively simple changes would make a big difference in these cases,” says Gelsthorpe. “These include induction videos for all remand prisoners with subtitles in key languages, explaining the functions and stages of the court system as well as legal terminology, and standard questions on the need for interpretive support before police interviews and court appearances.” She also suggests that prison healthcare staff be trained as active first responders.

As well as aiming to expand the study into mainland Europe by looking at anti-trafficking measures, Gelsthorpe is in discussion with various police forces about taking the research further, and has had follow-up meetings with government policy makers.

“I know that the police worry about identifying those committing crime under duress, and want to refine their responses,” she said. “We want to keep people on board. It’s not a question of just presenting a report on the table – that’s not the kind of research we do. If we want academic research to have impact, then we have to work with those who can create change.”

“But the message is clear: the powerlessness of these women in the hands of their traffickers is terrifyingly replicated within the criminal justice system, the legitimacy of which stands or falls on the way it treats victims as well as offenders.”