The Tibetan lama who wrote a world geography

A study by Tibetan scholar Lobsang Yongdan revisits a long-ignored section of a historic text to reveal how Tibetans were engaging with western scientific knowledge two centuries ago.  His research into a geography of the world, first published by a lama in 1830, challenges stereotypical views of Tibet as an isolated and inward-looking society.

My work contests the view that Tibet was a backward place, closed to the rest of the world, prior to the arrival of the British in 1904 and the Chinese in 1950.

Early in the 1800s, a Tibetan lama travelled from Drepung monastery in Lhasa to Beijing.  The journey of more than 2,000 miles would have taken him around four months. As an important Buddhist leader, he may well have been conveyed most of the way in a sedan chair. On the way, his retinue would have fallen in with travellers from other lands and heard unfamiliar languages. Perhaps this journey wakened the young lama’s natural curiosity about the world’s geography and its peoples, their customs and characteristics.

No-one knows why Btsan po no mon han wrote the remarkable Tibetan text, the Dzam gling rgyas bshad (DGRB), which translates as The Detailed Description of the World. First published in Mongolia in 1830, the book is in several parts, divided by continent and country. The section that describes Tibet, which comprises less than a quarter of the text, has been translated into European languages and has become one of Tibet’s most-read classics. The remainder of the text, however, has not been widely researched in the west.

Research by Lobsang Yongdan, a PhD candidate in the Department of Social Anthropology, now sets the entire text of the DGRB into a more deeply informed historical, political, anthropological context. In particular, Yongdan shows through his tracing of the many influences apparent in the book just how widely its author interacted with other thinkers in the intellectual circles of early 19th-century Beijing which was host to missions, trading posts and diplomats from many parts of the world. 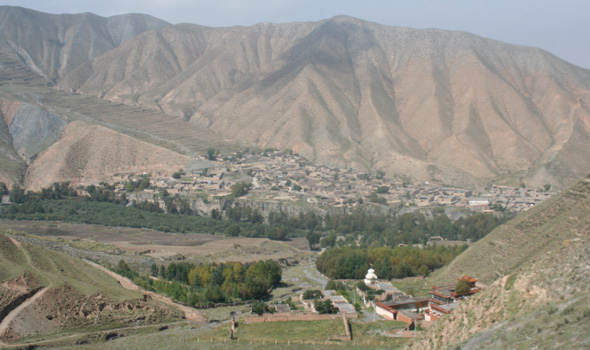 “As a Tibetan, I come from a country that has been a magnet for western anthropologists who are drawn to the integrity and ‘otherness’ of its culture.  I began my academic career as a historian of Tibet but in studying the DGRB within a western framework, I have taken an anthropological approach in order to look at the text from multiple viewpoints in terms of spiritual belief systems and history of science as well as national and cultural identities,” said Yongdan.

“I am myself the ‘otherness’ because I am that ‘native’ or ‘local informant’ on whom anthropologists rely to conduct interviews and to obtain information. Returning to the places where I was born, grew up and was educated is not the typical model for conventional anthropological inquiry. However, I considered that by going to back to Tibet and conducting my inquiries at Kumbum monastery, I was carrying out ‘anthropology at home’, an approach that is making an increasingly important contribution.”

Historically, interest in the DGRB has been patchy. From the later 19th century onwards, Europeans focused on the section of the text that deals with Tibet as a useful source of information. Tibetans, on the other hand, were much more intrigued by the sections that describe the world beyond their borders.

Yongdan is uniquely qualified to research the DGRB and its author. He was raised in Dobi in Amdo, north east Tibet. As a boy he joined a monastery and it was there that he first read the DGRB. Fluent in Tibetan, Chinese and English and conversant with the practice and literature of Tibetan Buddhism, Yongdan brings a multi-cultural viewpoint to his study of the text. “I first studied Btsan po’s work as a young Tibetan monk trying to understand the history of my country and how Tibetans studied world geography in earlier times,” he said. “I’ve spent the past four years looking in detail at the geographical conceptualisation, the creation of, and responses to the work.”

Only the sketchiest of details are known about Btsan po. He was born in 1789 in U lan mu ru in Amdo. Identified as a fourth reincarnation of third Btsan po no mon han, Ngag dbang ’phrin las rgya mtsho, he may have entered the Gser khog monastery as young as two. As a child, he would have been taught Buddhist logic, literature and cosmology.  From 1808, he studied at Drepung monastery, one of the largest monasteries in Lhasa.  He passed away in Beijing 1839, the year that marked the first Opium War between the Manchu and the British.

Around 1814, Btsan po travelled to Beijing to become a spiritual leader to the Qing emperor. During his long residence in Beijing, Btsan po read early Jesuit works of geography and became friendly with members of the Russian orthodox mission in Beijing. He met European scholars and diplomats, scientists and conversed with them on matters of world geography and the events of the day. The country-by-country descriptions in the book contain evidence of his encounters. 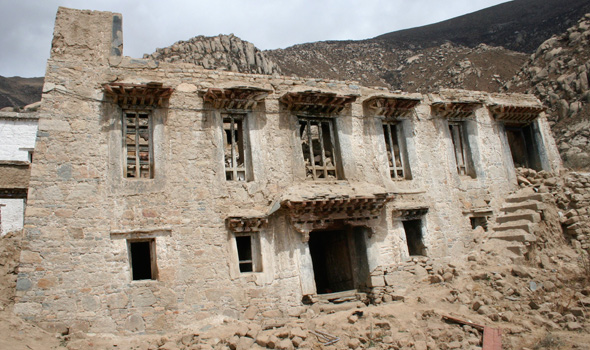 Yongdan reveals that Btsan po embarked on the compilation of a detailed world geography of his own volition, and as a Tibetan intellectual engaged with western knowledge on an equal footing with Europeans and others. In this respect, his research challenges the accepted view of geography - as a rational or scientific way to study lands, their inhabitants, and features of the physical world – as an exclusively European enterprise shared with the rest of the world.

He said: “Western discourse tends to make a sharp distinction between ‘religious’ and ‘scientific’ geography. Geography compiled with religious motivations is often regarded as ‘cosmography’ and depicted as belonging to the super-terrestrial realms, with little or no relationship to the geographical features of the earth. On the other hand, scientific geography is seen as rational and global. Most importantly, scientific geography was developed in Europe where its driving forces were exploration and imperialism.” 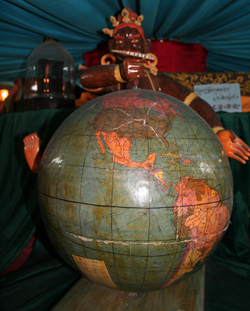 For centuries, Tibet was seen as one of the most remote places in the world. ‘Isolated’, ‘mysterious’ and ‘unmodernised’ became standard descriptions of historical Tibet. Yongdan suggests that this stereotypical picture is misleading and that Tibetans, like their European counterparts, were intensely curious about the world and open to the communication of knowledge on all kinds of topics.

“My work contests the view that Tibet was a backward place, closed to the rest of the world, prior to the arrival of the British in 1904 and the Chinese in 1950. Independently of European participation, Tibetans were actively involved in translating, studying and writing about European mathematical, cosmological and geographical knowledge in Tibetan,” said Yongdan.  “Btsan po’s descriptions of countries in Africa, the Middle East and central Asia suggest that these countries were not new to him by virtue of his encounters with Europeans. Rather, he treats at least some of these countries as places that Tibetans had known for centuries.”

Africa appears in the DGRB as the continent of Ba lang spyod, the western continent in Buddhist cosmology. Btsan po writes: “The European calls this continent Libby [Liberia?] or Africa. The continent is triangular in shape and it is huge. Its north extends to the Mediterranean Sea, the southern tip of continent is near the Steel Wall [Antarctica], the east extends to the Indian Ocean, and the west is bordered by sea. It takes eight months to journey from east to west and one year from the tip of the south to the north.”

The rich detail found in the DGRB indicates that its author had read widely in a range of languages. After giving the names of almost 80 European countries and places, he provides a general description of the continent: “While summer is hot and it rains a lot, in the winter there is heavy snow and cold. Because of the four different seasons, the Earth appears in four different colours, white, yellow, black and green. As I hear, there is a variety of grains in this land, and its harvest is better than other places. There is a tree called “olive” (a li ba) from which the fruit can be eaten and which can be ground for oil.”

Btsan po describes Europe as a fertile land where all kinds of foods and fruits grew, where people lived happily and in prosperity. “The kings are friendly to each other, and they send goods to each other, so if there is a shortage of materials in the one country, the other kings send the materials to that country. Men do not marry until they are thirty years old, and women twenty years old, none have the custom of having more than one wife, whether the person is a follower of Jesus, a monk or nun, a king or a minister, and all respect women.”

In the style of the time, Btsan po makes sweeping statements – especially in his descriptions of people. “In general, Chinese people are beautiful and well-shaped. They speak with gentle voices and are polite. Although they act as deep thinkers and honest, in reality, they are accustomed to trickery and cowardice. They have difficulty in trusting other people. If they do trust someone, they are loyal and steady.”  The English do not impress him because “… compared to other Europeans, they are ill-mannered people as they like to drink so much”. 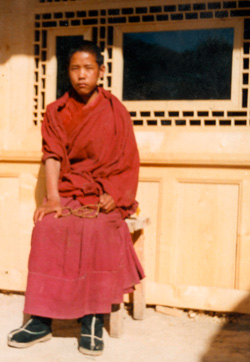 More than 20 years have passed since Yongdan first read the text of the DGRB as a teenager in the Kumbum monastery in the north-eastern part of the Tibetan plateau. He recalled: “One night an older monk invited a group of us to supper. During the course of a conversation about Tibet and the world beyond our borders he told us that Tibetans knew about the world before the British and Chinese arrived – and that Tibetans charted the world like Europeans did in earlier times. We did not believe it as we had already absorbed the universal message that Tibetans knew little about what lay beyond their borders.”

Yongdan’s trajectory as a Tibetan scholar has taken him first to monasteries in Amdo, where he studied Tibetan languages, Buddhism and philosophy, then to California where he studied political science, and most recently to Cambridge where he has spent the past five years studying for a MPhil and PhD in Social Anthropology.

He said: “Like Btsan po, I was raised in the Buddhist tradition and, like him, I left my country to learn more about the world. Throughout my years of studying in the west, Btsan po and his world geography remained at the forefront of my mind. As a Tibetan, I always wanted to know how Tibetans viewed about the Europeans and its cultures in the past. My research into the DGRB has provided me with answers and insights that have changed my views about the history of east–west encounters, and those between the west and Tibet in particular.”

Inset images: Amdo, Tibet; Btsan po’s residence in Drepung monastery, Lhasa; globe with place names in Tibetan, said to have been made by Rtse sngags ram pa, a monk at Labrang in the 1920s, based on a wall painting in the Hevajra Temple at Labrang monastery; Lobsang Yongdan as a young monk (all images: Lobsang Yongdan).