Cambridge scientists are part of a resolution revolution. Building powerful instruments that shatter the physical limits of optical microscopy, they are beginning to watch molecular processes as they happen, and in three dimensions.

There has been a revolution in optical microscopy and it’s been 350 years in the making. Ever since Robert Hooke published his Physiological Descriptions of Minute Bodies in 1665, the microscope has opened up the world in miniature. But it has also been limited by the wavelength of light.

Anything smaller than the size of a bacterial cell (around 250 nanometres) appears as a blurred blob through an optical microscope, simply because light waves spread when they are focused on a tiny spot. As a result, resolving two tiny spots that lie close together has been tantalisingly out of reach using an optical microscope. Unfortunately, many biological interactions occur at a spatial scale much smaller than this.

But, thanks to recent breakthroughs, a new era of super-resolution microscopy has begun. The developments earned inventors Eric Betzig and William E Moerner (USA) and Stefan Hell (Germany) the 2014 Nobel Prize for Chemistry, and are based on clever physical tricks that work around the problem of light diffraction.

Professor Clemens Kaminski, whose team in the Department of Chemical Engineering and Biotechnology designs and builds super-resolution microscopes to study Alzheimer’s disease, explained: “The technology is based on a conceptual change, a different way of thinking about how we resolve tiny structures. By imaging blobs of light at separate points in time, we are able to discriminate them spatially, and thus prevent image blur.”

Imagine taking a photo of a tree lit by the glow of ten thousand tiny lights scattered over its branches. The emission from each light would overlap. At best you would see a fuzzy, glowing shape lacking in detail. But if you were to switch on only a few lights at a time, locate the centre of each glow and take a picture, and then repeat this process thousands of times for different lights, the composite image would resolve into a myriad of distinguishable dots, denoting the exact position of each individual light on the tree.

This is analogous to the techniques developed by the Nobel Prize winners: in one technique, a sample is tagged with light-activated markers called fluorophores that can be switched on and off with pulses of light, like a switchable light bulb; in another, the light at the outer edges of each blob of light is selectively blocked.

Either way, by imaging a sparse subset of lights, they can be localised with nanometre precision. When combined, a picture starts to emerge that features a resolution that is 10 to 100 times better than previously possible. 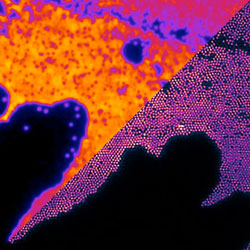 “It’s been hailed as revolutionary because it means that biologists can validate some of their hypotheses for the first time,” said Dr Kevin O’Holleran who co-leads the Cambridge Advanced Imaging Centre (CAIC), which is currently building two super-resolution microscopes. “Although electron microscopy has very high resolution, it can’t be performed on live cells. With super-resolution optical microscopy, scientists can track molecular processes as they happen and in three dimensions.”

Meanwhile, Dr Steven Lee and Professor David Klenerman in the Department of Chemistry have built what they believe is the first 3D super-resolution microscope of its kind in Europe. They are using the machine to watch the organisation of cell-surface proteins at the point when an immune cell is triggered into action. Before super-resolution, they needed to artificially reduce the number of proteins on the cell surface to make visualisation easier; now, they can work with normal levels of up to 10,000 proteins at a time on the cell surface.

“These exciting discoveries have emerged through years of painstaking  research by physical scientists trying to better understand how light interacts with matter at a fundamental level,” explained Lee. “This work has enabled us to gain insight into biological processes by simply ‘looking’ at dynamic events at spatial scales that much better approximate the physical dimension that biomolecules interact on.”

Kaminski’s team has been visualising the ultrastructure of the clumps of misfolded proteins that cause Alzheimer’s disease. “We’d like to study what causes proteins to become toxic when they aggregate, and visualise them as they move from cell to cell to see whether there are opportunities early in the process to halt their progression.”

Like any fast-moving and transformative technology, super-resolution microscopy has required researchers to drive forward the capabilities of the lenses and light sources, as well as the chemistry of the fluorophores and the mathematical algorithms for image analysis. As a result, designing and building their own microscopes, rather than waiting for commercial devices to become available, has been the best option.

“The field is dynamic and no instrument is exactly right for the questions you want to answer. We have to build the instrument around the science,” explained Dr George Sirinakis, who works with Professor Daniel St Johnston in the Gurdon Institute. His machines will be used to understand cell polarity and visualise the movement of thousands of tiny sacs called vesicles as they transport their cargo within cells. This process has never been seen before because the vesicles are so small and move fast.

No longer are these benchtop machines. Super-resolution microscopes resemble an army of lenses and mirrors marching across a table top, each minutely turning, concentrating and shaping the light beam that falls onto the sample stained with fluorescence markers. Tens of thousands of images are collected from any one sample – creating a deluge of ‘big data’ that requires complex mathematical algorithms to make sense of the information.

Quite simply, super-resolution microscopy is a feat of engineering, physics, chemistry, mathematics, computer science and biology, and it’s therefore out of reach to researchers who lack the necessary expertise or funds to take a step into this field.

CAIC has recently been created to meet super-resolution and other microscopy needs in the biological sciences. “We are a research and development facility. We have state-of-the- art commercial microscopes and we build our own, tailoring them to the needs of the biologists who come to us as a service facility or as a collaborative venture,” explained O’Holleran, who estimates that around 100 researchers will become part of the CAIC community.

“We’re also a hub. We connect researchers who’ve built their own devices and we train PhD students in the cross-disciplinary skills needed for cutting-edge imaging.”

CAIC, Klenerman, Kaminski and others have now been awarded funding as part of the Next Generation Microscopy Initiative Programme led by the Medical Research Council to help establish Cambridge as a national centre of excellence in microscopy. Part of this funding is being used for the two new super-resolution microscopes currently being built in CAIC.

The researchers hope that super-resolution microscopes will one day become the workhorse of biology, allowing ever-deeper probing of living structures. Breaking the diffraction barrier of light had seemed an insurmountable barrier until recent years. With continuing advances, biologists are beginning to look beyond imaging single cells to the possibility of moving through tissues, tracking the movement of molecules in three dimensions and visualising the process of life unfolding.

Inset image: What was once a fuzzy glow (left of image) can now be super-resolved (right) even if, as here, the structures are smaller than the wavelength of light; credit: Laurie Young, Florian Stroehl and Clemens Kaminski 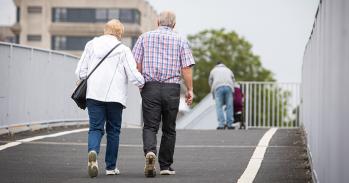