Whale tale: a Dutch seascape and its lost Leviathan

Earlier this year a conservator at the Hamilton Kerr Institute made a surprising discovery while working on a 17th-century painting owned by the Fitzwilliam Museum.  As Shan Kuang cleaned the surface, she revealed the beached whale that had been the intended focus of the composition. The artwork is now back on display in the Fitzwilliam's newly-refurbished gallery of Dutch Golden Age painting.

As I worked across the surface a man appeared – and then next to him a shape that looked like a sail... At the end of the treatment, the whale had returned as a key component of the composition, just as the artist had intended.

In 1873 the Fitzwilliam Museum, Cambridge, was given a number of Dutch landscape paintings by a benefactor called Richard Kerrich. Among these works of art was a beach scene painted by the artist Hendrick van Anthonissen early in the 17th century. Anthonissen depicts groups of people clustered on a sandy beach at the small town of Scheveningen. Other figures stand on the cliffs and, on the shore, several boats have been pulled up on the sand.

For at least 150 years this seemingly unremarkable work of art has harboured a secret. The cleaning of the painting has now revealed that a beached whale provided the focus of the original composition. The whale explains the hitherto slightly baffling presence of groups of people on the beach, and atop the cliffs, on what appears to be a blustery winter’s day. With the Leviathan now back where the artist placed it, the scene makes perfect sense.

The hulking shape of the stranded whale was discovered by Shan Kuang, a postgraduate student at the world-renowned Hamilton Kerr Institute, a division of the Fitzwilliam Museum dedicated to the conservation and restoration of easel paintings. Kuang was assigned the painting as part of conservation carried out on Dutch works of art during the refurbishment of the Fitzwilliam’s gallery of Dutch Golden Age painting, which reopened on Tuesday.

The first inkling that a key feature was missing from the Anthonissen artwork came when Kuang meticulously removed a top layer of varnish and overpaint to reveal a small figure, apparently standing on the sea horizon. “As conservators, we take off the resin varnish that was applied to protect and saturate the paint. The varnish yellows and darkens with time,” said Kuang.

“As I worked across the surface a man appeared – and then next to him a shape that looked like a sail. By this time I could also make out an area of the sea which had been painted more crudely than the rest of the ocean. It was a thick layer of repaint covering a large section of original artwork. At the end of the treatment, the whale had returned as a key component of the composition, just as the artist had intended.”

The man who seemed to be standing on the horizon is, in fact, balanced on the whale’s back where Kuang suggests that he might even be measuring its length.The chosen focus of the painting resonates with a surge of public interest in whales: contemporary records show many instances of whale beaching on the coastline of the Netherlands in the first half of the 17th century. While the Anthonissen painting seeks to represent the whale in a realistic manner, some prints from the period portray whales as rampaging monsters of the deep and omens of disaster.

Conservators face difficult decisions when confronted with overpainting. “It’s important that we are true to the artist’s intentions. After establishing that Anthonissen had not made this alteration himself, the decision was made – in conjunction with curators at the Fitzwilliam – to uncover the original paint hiding beneath the repaint,” said Kuang.

“Removing repaint has its uncertainties: you don’t always know how easily the paint can be removed or the condition of the original painting beneath the overpaint. Fortunately, the whale only had a few damages and was overall in good condition. I was able to remove the overpainting by scraping with a scalpel and using carefully chosen solvents. I had to proceed very gently and often work under the microscope to ensure no damage was done to the painting. It was very satisfying to see the whale slowly appearing.”

No-one knows why the whale was painted out of the picture – or when. “Today we treat works of art as entities but in the previous centuries, painting were often elements of interior design that were adapted to fit certain spaces – or adjusted to suit changing tastes. It’s possible that the whale was removed because the presence of a dead animal was considered offensive – or perhaps without the whale the picture was more marketable,” said Kuang.

“According to the documentation, no-one had any idea that the painting featured a whale when it was gifted to the Fitzwilliam. An analysis of the paint suggests the alteration is very old, but not contemporary to when the picture was painted circa 1641. The whale was likely overpainted in the 18th or 19th century, before it was given to the Fitzwilliam in 1873.”

Conservators require a thorough grounding in chemistry as well as fine art. On top of that, they need excellent hand-eye coordination and a commitment to detail. Kuang, who took a first degree in chemistry at Yale University in the USA, is in her second year of a three-year course that will lead to a Postgraduate Diploma in Conservation of Easel Paintings. “As students at the Hamilton Kerr we are extremely privileged to be able to work, under close supervision from tutors, on the conservation of important works of art. To have made a discovery like this – and bring an element of the composition back to life – is just wonderful,” she said.

View of Scheveningen Sands by Hendrick van Anthonissen is on permanent display in the Fitzwilliam Museum. For information and opening times http://www.fitzmuseum.cam.ac.uk/ 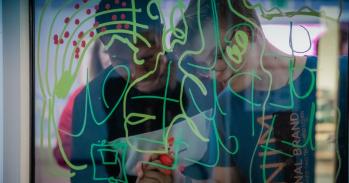 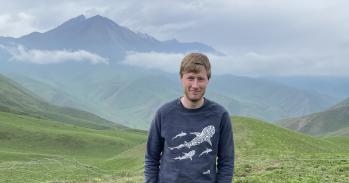