New understanding of the physics of clouds is helping to model both climate change and the impact of volcanic eruptions and wild fires.

Professor Graf’s group has simulated the behaviour and microphysics of convective clouds using a concept more familiar within population dynamics: they treat clouds as individuals that compete for food.

Our climate is the net result of many complex processes that transfer and redistribute the Sun’s energy through the Earth’s atmosphere, oceans, land and ecosystems. Because these processes are basically nonlinear, their interaction unavoidably leads to chaotic variability of climate and weather on various time scales, and we rely on climate models to achieve some sense of the dynamics of weather and to predict future climate. Currently, one of the greatest sources of uncertainty in climate modelling is posed by clouds, which are not resolved individually but instead are averaged. Professor Hans-F. Graf’s group, based in the Department of Geography and part of the Centre for Atmospheric Science (see panel), is developing a new technique for global and regional climate modelling that moves beyond treating clouds as ‘one-size-fits-all’.

Climate models consist of a set of coupled differential equations based on first principles of physics that are solved numerically by dividing the planet into a three-dimensional grid. Available computer power dictates that each grid is typically 100–300 km in size. Unfortunately, any processes that are smaller cannot be explicitly resolved and have to be ‘parameterised’ as an average. Among these are clouds: the standard approach has been to create an average cloud that has to mimic all the effects of the cloud spectrum of different-sized convective clouds. Of course, in nature, the cloud spectrum is highly variable depending on the actual weather situation and location, and clouds can range from a few hundred metres to a few kilometres in scale.

Clouds are extremely important for realistic model simulations since they are the ultimate drivers of the global atmospheric circulation. Water vapour carrying latent heat is transported upwards by convection or in large weather systems (fronts), where it cools and eventually forms clouds; precipitation as rain then releases the latent heat. This convection is strongest in the tropics, where the vapour-laden trade winds from both hemispheres converge, forming deep, rain-producing convective clouds. It is here that the atmosphere receives the energy that drives the whole global circulation.

Clouds are also highly relevant to changes in climate that result from human activities. Changes in land use affect reflectivity and evaporation from soil and vegetation, and hence the transfer of energy to the atmosphere; fossil fuel burning and industrial processes increase aerosols that reflect sunlight or absorb solar and terrestrial radiation. Both land use change and aerosols have an effect on cloudiness and precipitation at both the local and the micro scale.

The innovative approach adopted by Professor Graf’s group has been to simulate the behaviour and microphysics of convective clouds using a concept more familiar within population dynamics: they treat clouds as individuals that compete for food. 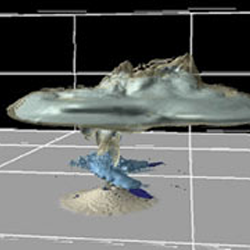 This technique allows the separation of individual clouds from a larger set of clouds that can potentially evolve under a given weather situation (that is, at a specific time and in a specific grid cell of the model). The system is based on the solution of a set of Lotka–Volterra-type differential equations, also known as predator–prey equations from their use for describing biological systems: the clouds (the ‘predators’) have a limited ‘food’ supply of convective available potential energy (the ‘prey’, this being the amount of energy available for convection), for which clouds of different characteristics (size, depth) are competing.

By capturing the variations of cloud spectra in a statistical sense, cloud microphysics can be treated explicitly and it is now possible to determine in-cloud vertical velocities, interactions with aerosols, convective transport, rainfall intensity and radiation effects.

The team has been focusing on a variety of different types of cloud – most notably the effects of smoke on clouds and precipitation over Amazonia and Indonesia. Initially funded by the European Union, the project is now contributing to the Danum-OP3 consortium that spans eight UK institutions and is funded by the Natural Environment Research Council (NERC) to investigate the effects of the replacement of pristine rain forest by oil palm plantations in northern Borneo. Recently published data show how the smoke from the extreme peat fires that plagued Indonesia and surrounding countries for months during 1997–8 reduced the amounts of rainfall in the area. The reduced rainfall, in turn, increased the residence time of the smoke particles in the atmosphere, thus aggravating the situation.

A second focus has been the development and application of the Active Tracer High-resolution Atmospheric Model (ATHAM). The development of this high-resolving model started immediately after the eruption of the Mount Pinatubo volcano on the Philippines in the early 1990s, when Professor Graf was at the Max Planck Institute for Meteorology in Hamburg. The model simulates convective plumes at resolutions down to a few tens of metres and was initially used to understand the dynamic, microphysical and chemical processes within volcanic eruption plumes. An important question was whether these vigorous convective systems could effectively transport magmatic halogen compounds into the stratosphere, where they could harm the ozone layer. The model has also been used successfully to simulate big fire storms induced by wild fires, and the results have proved that pollutants from these fires are introduced into the lower stratosphere.

Further applications of ATHAM are under current investigation by Dr Michael Herzog in Professor Graf’s group, particularly in relation to aviation safety. Fine silicate ash from volcanic eruptions poses a severe risk for aeroplanes. Although ash clouds can be detected by satellite monitoring, they are often obscured by ice particles residing above the ash, and ATHAM can be used to predict whether ice is formed within a volcanic plume. Further plans with ATHAM are ongoing with support from a joint Chinese–German research project that will study the effects on weather and climate in Southeast Asia resulting from the dramatic changes of land use and ecology on the Tibetan plateau during the past 60 years.

For more information, please contact the author Professor Hans-F. Graf (hans.graf@geog.cam.ac.uk) at the Department of Geography.

The Centre for Atmospheric Science is one of the premier groups in the UK for atmospheric studies. It encompasses research in three departments:

The testimony of trees: how volcanic eruptions shaped 2000 years of world history