New research establishes nature of malfunction in protein molecules that can lead to onset of dementia.

Researchers have pinpointed a catalytic trigger for the onset of Alzheimer’s disease – when the fundamental structure of a protein molecule changes to cause a chain reaction that leads to the death of neurons in the brain.

For the first time, scientists at Cambridge’s Department of Chemistry, led by Dr Tuomas Knowles, Professor Michele Vendruscolo and Professor Chris Dobson working with Professor Sara Linse and colleagues at Lund University in Sweden have been able to map in detail the pathway that generates “aberrant” forms of proteins which are at the root of neurodegenerative conditions such as Alzheimer’s.

They believe the breakthrough is a vital step closer to increased capabilities for earlier diagnosis of neurological disorders such as Alzheimer’s and Parkinson’s, and opens up possibilities for a new generation of targeted drugs, as scientists say they have uncovered the earliest stages of the development of Alzheimer’s that drugs could possibly target.

The study, published today in the Proceedings of the US National Academy of Sciences, is a milestone in the long-term research established in Cambridge by Professor Christopher Dobson and his colleagues, following the realisation by Dobson of the underlying nature of protein ‘misfolding’ and its connection with disease over 15 years ago.

The research is likely to have a central role to play in diagnostic and drug development for dementia-related diseases, which are increasingly prevalent and damaging as populations live longer.

In 2010, the Alzheimer’s Research UK showed that dementia costs the UK economy over £23 billion, more than cancer and heart disease combined. Just last week, PM David Cameron urged scientists and clinicians to work together to “improve treatments and find scientific breakthroughs” to address “one of the biggest social and healthcare challenges we face.”

The neurodegenerative process giving rise to diseases such as Alzheimer’s is triggered when the normal structures of protein molecules within cells become corrupted.

Protein molecules are made in cellular ‘assembly lines’ that join together chemical building blocks called amino acids in an order encoded in our DNA. New proteins emerge as long, thin chains that normally need to be folded into compact and intricate structures to carry out their biological function.

Under some conditions, however, proteins can ‘misfold’ and snag surrounding normal proteins, which then tangle and stick together in clumps which build to masses, frequently millions, of malfunctioning molecules that shape themselves into unwieldy protein tendrils.

The abnormal tendril structures, called ‘amyloid fibrils’, grow outwards around the location where the focal point, or 'nucleation' of these abnormal “species” occurs.

Amyloid fibrils can form the foundations of huge protein deposits – or plaques – long-seen in the brains of Alzheimer’s sufferers, and once believed to be the cause of the disease, before the discovery of ‘toxic oligomers’ by Dobson and others a decade or so ago.

A plaque’s size and density renders it insoluble, and consequently unable to move. Whereas the oligomers, which give rise to Alzheimer's disease, are small enough to spread easily around the brain - killing neurons and interacting harmfully with other molecules - but how they were formed was until now a mystery.

The new work, in large part carried out by researcher Samuel Cohen, shows that once a small but critical level of malfunctioning protein ‘clumps’ have formed, a runaway chain reaction is triggered that multiplies exponentially the number of these protein composites, activating new focal points through ‘nucleation’.

It is this secondary nucleation process that forges juvenile tendrils, initially consisting of clusters that contain just a few protein molecules. Small and highly diffusible, these are the ‘toxic oligomers’ that careen dangerously around the brain cells, killing neurons and ultimately causing loss of memory and other symptoms of dementia. 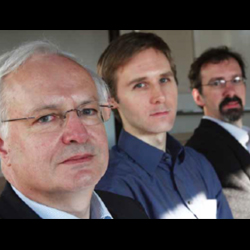 “There are no disease modifying therapies for Alzheimer’s and dementia at the moment, only limited treatment for symptoms. We have to solve what happens at the molecular level before we can progress and have real impact,” said Dr Tuomas Knowles from Cambridge’s Department of Chemistry, lead author of the study and long-time collaborator of Professor Dobson and Professor Michele Vendruscolo.

“We’ve now established the pathway that shows how the toxic species that cause cell death, the oligomers, are formed. This is the key pathway to detect, target and intervene – the molecular catalyst that underlies the pathology.”

The researchers brought together kinetic experiments with a theoretical framework based on master equations, tools commonly used in other areas of chemistry and physics but had not been exploited to their full potential in the study of protein malfunction before.

The latest research follows hard on the heels of another ground breaking study, published in April of this year again in PNAS, in which the Cambridge group, in Collaboration with Colleagues in London and at MIT, worked out the first atomic structure of one of the damaging amyloid fibril protein tendrils. They say the years spent developing research techniques are really paying off now, and they are starting to solve “some of the key mysteries” of these neurodegenerative diseases.

“We are essentially using a physical and chemical methods to address a biomolecular problem, mapping out the networks of processes and dominant mechanisms to ‘recreate the crime scene’ at the molecular root of Alzheimer’s disease,” explained Knowles.

“Increasingly, using quantitative experimental tools and rigorous theoretical analysis to understand complex biological processes are leading to exciting and game-changing results. With a disease like Alzheimer’s, you have to intervene in a highly specific manner to prevent the formation of the toxic agents. Now we’ve found how the oligomers are created, we know what process we need to turn off.”

Image, magnified a million times, of amyloid fibril, the type of protein structures that are formed in Alzheimer’s