A team of scientists at the University of Cambridge has developed an artificial mouse embryo-like structure capable of forming the three major axes of the body. The technique, reported today in the journal Nature, could reduce the use of mammalian embryos in research.

We were surprised to see how far gastruloids develop, their complex organisation and the presence of early-stage tissues and organ

The definitive architecture of the mammalian body is established shortly after the embryo implants into the uterus. This body plan has spatial references, or axes, that guide the emergence of tissues and organs: an antero-posterior axis defined by the head at one end and the tail at the other, an orthogonal dorso-ventral axis and a medio-lateral axis, which orientates the arrangement of internal organs like the liver, pancreas or the heart.

Studying the processes orchestrating the formation of early mammalian embryos is hampered by the difficulty in obtaining them. Earlier findings from the Cambridge group had shown that embryonic stem cells could self-organise in culture into structures with an antero-posterior polarity.

Now, in collaboration with researchers from the University of Geneva and the Swiss Federal Institute of Technology Lausanne (EPFL), they have extended the cultures to reveal a capacity of mouse stem cells to produce ‘pseudo-embryos’ that display some of the important characteristics of a normal mouse embryo. Established from only 300 embryonic stem cells, these structures, called ‘gastruloids’, exhibit developmental features and organisation comparable to the posterior part of a six to ten day-old embryo.

The study shows that gastruloids organise themselves with regard to the three main body axes, as they do in embryos, and follow similar patterns of gene expression. One example of this is the pattern of expression of Hox genes, an ensemble of genes that are expressed in a precise sequential order in the embryo and act as landmarks for different aspects of the body, including the position of different vertebrae or of limbs. This degree of organisation makes gastruloids a remarkable system for the study of the early stages of normal or abnormal embryonic development in mammals.

“These results significantly extend our earlier findings. We were surprised to see how far gastruloids develop, their complex organisation and the presence of early-stage tissues and organ,” says Professor Alfonso Martinez Arias, leader of the University of Cambridge team, at its Department of Genetics.

Professor Denis Duboule from the University of Geneva and at the EPFL explained, “To determine whether gastruloids organise themselves into bona fide embryonic structures, we characterised their level of genetic activity at different stages of development”.

The researchers identified and quantified the RNA transcribed from gastruloids and compared the expressed genes with those of mouse embryos at comparable stages of development, which showed there was a high degree of similarity.

“Gastruloids form structures similar to the posterior part of the embryo, from the base of the brain to the tail, whose development program is somewhat different from that of the head,” says Dr Leonardo Beccari, co-first author of the study, from the University of Geneva.

These embryo-like structures express genes characteristic of the various types of progenitor cells necessary for the constitution of future tissues.

“The complexity of gene expression profiles increases over time, with the appearance of markers from different embryonic cell lineages, much like the profiles observed in control embryos,” adds Dr Naomi Moris from the Cambridge team, co-first author of the article.

“The implementation of the Hox gene network over time, which mimics that of the embryo, particularly confirms the remarkably high level of self-organisation of gastruloids,” explains Mehmet Girgin, co-first author of the study and PhD student at the Institute of Bioengineering at EPFL.

The researchers say that these pseudo-embryos will allow an alternative method to animal research, in accordance with the principle of the ‘3Rs’ (the reduction, replacement and refinement of the use of animals in research). The finding that so much of the development of an embryo can be recapitulated using stem cells will also increase researchers’ ability to study the genetic mechanisms underlying normal development and disease.

Earlier in the year, the group led by Professor Magdalena Zernicka-Goetz at the Department of Physiology, Development and Neuroscience at the University of Cambridge reported embryo-like structures capable of generating an anteroposterior axis but which required additional, extra-embryonic, stem cells to generate anteroposterior polarity. The new work shows surprisingly that stem cells can self-organise the three axes independently of the extra-embryonic tissues.

“It makes things much simpler for research,” says Professor Martinez Arias. “Not only do gastruloids self-organise to generate the three axes, but they also mimic the spatial and temporal patterns of embryos, without extra-embryonic tissue. This suggests that gastruloids can become a useful tool, particularly in understanding gene expression during development.”

Adapted from a press release from the University of Geneva.

Image caption
Seven-day old gastruloid. The cell nuclei are marked in blue. Neural progenitor cells (green) are distributed along the antero-posterior axis. Progenitor cells of the tail bud (pink) are confined to the posterior extremity of the gastruloid and indicate the direction of its elongation. © Mehmet Girgin, EPFL 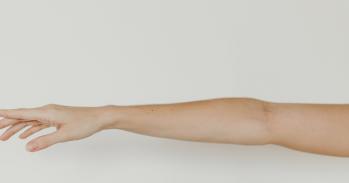