Our personality may be shaped by how our brain works, but in fact the shape of our brain can itself provide surprising clues about how we behave – and our risk of developing mental health disorders – suggests a study published today.

Linking how brain structure is related to basic personality traits is a crucial step to improving our understanding of the link between the brain morphology and particular mood, cognitive, or behavioural disorders

In a study published today in the journal Social Cognitive and Affective Neuroscience, an international team of researchers from the UK, US, and Italy have analysed a brain imaging dataset from over 500 individuals that has been made publicly available by the Human Connectome Project, a major US initiative funded by the National Institutes of Health. In particular, the researchers looked at differences in the brain cortical anatomy (the structure of the outer layer of the brain) as indexed by three measures – the thickness, area, and amount of folding in the cortex – and how these measures related to the Big Five personality traits.

“Evolution has shaped our brain anatomy in a way that maximizes its area and folding at the expense of reduced thickness of the cortex,” explains Dr Luca Passamonti from the Department of Clinical Neurosciences at the University of Cambridge. “It’s like stretching and folding a rubber sheet – this increases the surface area, but at the same time the sheet itself becomes thinner. We refer to this as the ‘cortical stretching hypothesis’.”

“Cortical stretching is a key evolutionary mechanism that enabled human brains to expand rapidly while still fitting into our skulls, which grew at a slower rate than the brain,” adds Professor Antonio Terracciano from the Department of Geriatrics at the Florida State University. “Interestingly, this same process occurs as we develop and grow in the womb and throughout childhood, adolescence, and into adulthood: the thickness of the cortex tends to decrease while the area and folding increase.”

In addition, as we get older, neuroticism goes down – we become better at handling emotions. At the same time, conscientiousness and agreeableness go up – we become progressively more responsible and less antagonistic.

The researchers found that high levels of neuroticism, which may predispose people to develop neuropsychiatric disorders, were associated with increased thickness as well as reduced area and folding in some regions of the cortex such as the prefrontal-temporal cortices at the front of the brain.

In contrast, openness, which is a personality trait linked with curiosity, creativity and a preference for variety and novelty, was associated with the opposite pattern, reduced thickness and an increase in area and folding in some prefrontal cortices. 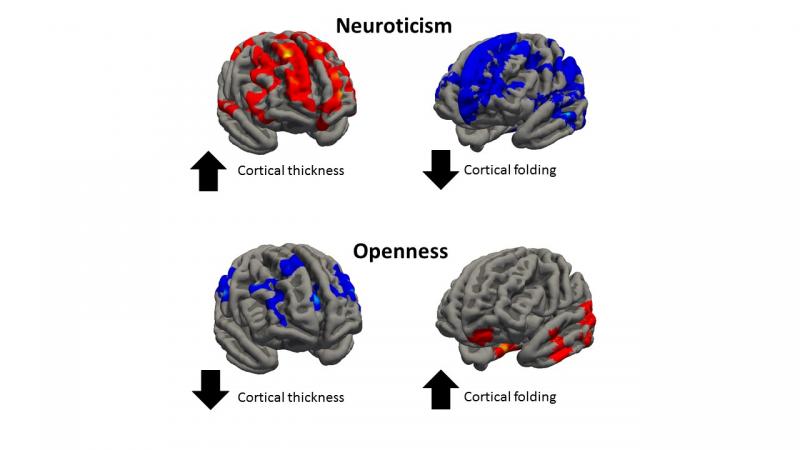 “Our work supports the notion that personality is, to some degree, associated with brain maturation, a developmental process that is strongly influenced by genetic factors,” says Dr Roberta Riccelli from Italy.

“Of course, we are continually shaped by our experiences and environment, but the fact that we see clear differences in brain structure which are linked with differences in personality traits suggests that there will almost certainly be an element of genetics involved,” says Professor Nicola Toschi from the University ‘Tor Vergata’ in Rome. “This is also in keeping with the notion that differences in personality traits can be detected early on during development, for example in toddlers or infants.”

The volunteers whose brains were imaged as part of the Human Connectome Project were all healthy individuals aged between 22 and 36 years with no history of neuro-psychiatric or other major medical problems. However, the relationship between differences in brain structure and personality traits in these people suggests that the differences may be even more pronounced in people who are more likely to experience neuro-psychiatric illnesses.

“Linking how brain structure is related to basic personality traits is a crucial step to improving our understanding of the link between the brain morphology and particular mood, cognitive, or behavioural disorders,” adds Dr Passamonti. “We also need to have a better understanding of the relation between brain structure and function in healthy people to figure out what is different in people with neuropsychiatric disorders.”

This is not the first time the researchers have found links between our brain structure and behaviour. A study published by the group last year found that the brains of teenagers with serious antisocial behaviour problems differ significantly in structure to those of their peers.