For what is believed to be the first time in the event’s 155-year history, a Cambridge college will be contributing a garden to this year’s Chelsea Flower Show.

For what is believed to be the first time in the event’s 155-year history, a Cambridge college will be contributing a garden to this year’s Chelsea Flower Show.

New Hall, a women's college at the University of Cambridge, will create a Chic Garden entitled The Transit Of Venus. Inspired by the college's buildings, collections and the achievements of its members, the garden will be designed and created from start to finish by a team of alumnae, including the designer, Sue Goss, under the guidance of Head Gardener, Jo Cobb.

The transit of Venus, when Venus passes between the Sun and the Earth, is a potent moment in the history of science, which inspired Captain Cook's Endeavour voyage. The chic garden will celebrate New Hall's lively spirit of scientific enquiry and its association with several eminent alumnae astronomers, including Professor Jocelyn Bell Burnell, who discovered pulsars during her time as a postgraduate student at New Hall.

The elliptical path Venus takes during its transit will be represented by a curved wall weaving through the centre of the garden. Three mirrored panels will also be installed to reveal reflections, silhouettes and shadows and give visitors the sense that they are viewing the transit from different positions on Earth as they walk past.

Two globes will also represent the planets passing through time. A glass sphere at the back of the garden will symbolise a planet still with its protective atmosphere, like Earth, while a parched Venus will be signified by a second globe at the front. This second transition, from a lush, green planet to one that has become parched and barren has a further connection with New Hall, whose annual Environment on the Edge lecture series examines our relationship with the natural world and what tomorrow might bring.

"Over recent years the gardens at New Hall have gained a reputation for being some of the most colourful and lively in the University," Anne Lonsdale, President of New Hall, said. "This, combined with the outstanding expertise of our alumnae, makes this an exciting but attainable project for the College."

The Chelsea garden will also be packed with other symbolism special to the college. The variety of colourful flowers will aim to reflect the diverse range of the College's collection of contemporary art by women. New Hall's Grade II* listed modernist architecture has meanwhile helped to inspire the garden's curving, white walls.

Once the Show is over, many features of the New Hall garden will return to the college to create a new garden in commemoration of its founding President, Dame Rosemary Murray.

The team of alumnae planning the garden includes Sue Goss, a garden designer and lecturer, who has won several awards at Chelsea, including a Gold, two Silver-Gilts, Best Courtyard Garden and BBC People's Award. Ursula Buchan, award-winning gardening journalist and author, has provided the planting plan, while Cambridge-based architect Anne Cooper is helping with researching, sourcing and detailing the materials for the construction. The team also includes Kate Gadsby, a gardens photographer whose calendar of images from the New Hall gardens has helped to fund the project. 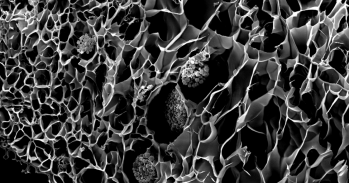