‘Smart’ holograms, which are currently being tested to monitor diabetes, and could be used to monitor a wide range of medical and environmental conditions in future, have been developed by researchers.

While these sorts of inexpensive, portable tests aren’t meant to replace a doctor, holograms could enable people to easily monitor their own health.

Responsive holograms that change colour in the presence of certain compounds are being developed into portable medical tests and devices, which could be used to monitor conditions such as diabetes, cardiac function, infections, electrolyte or hormone imbalance easily and inexpensively.

The ‘smart’ holograms can be used to test blood, breath, urine, saliva or tear fluid for a wide range of compounds, such as glucose, alcohol, hormones, drugs, or bacteria. When one of these compounds is present, the hologram changes colour, potentially making the monitoring of various conditions as simple as checking the colour of the hologram against a colour gradient. Clinical trials of the holographic sensors to monitor glucose levels and urinary tract infections in diabetic patients are currently underway at Addenbrooke’s Hospital, part of Cambridge University Hospitals.

The interdisciplinary project by researchers from the University of Cambridge uses a highly absorbent material known as a hydrogel, similar to contact lenses, impregnated with tiny particles of silver. Using a single laser pulse, the silver nanoparticles are formed into three-dimensional holograms of predetermined shapes in a fraction of a second.

When in the presence of certain compounds, the hydrogels either shrink or swell, causing the colour of the hologram to change to any other colour in the entire visible spectrum, the first time that this has been achieved in any hydrogel-based sensor.

A major advantage of the technology is that the holograms can be constructed in a fraction of a second, making the technology highly suitable for mass production. Details of the holographic sensors were recently published in the journal Advanced Optical Materials.

“Currently, a lot of medical testing is performed on large, expensive equipment,” said Ali Yetisen, a PhD student in the Department of Chemical Engineering & Biotechnology, who led the research. “While these sorts of inexpensive, portable tests aren’t meant to replace a doctor, holograms could enable people to easily monitor their own health, and could be useful for early diagnosis, which is critical for so many conditions.”

The holographic sensors produced by the Cambridge team are much faster, easier and cheaper to produce than current technologies – it is estimated that a single sensor would cost just ten pence to make, which would make it particularly useful in the developing world, where the costs of current glucose tests can be prohibitive. The entire sensing process is reversible, and the same sensor may be reused many times, after which it may be easily disposed of.

In addition to the clinical tests currently underway at Addenbrooke’s against current state-of-the-art glucose monitoring technology, the researchers are developing a prototype smartphone-based test suitable for both clinical and home testing of diabetes and clinically relevant conditions.

“In addition to medical applications, the holographic technology also has potential uses in security applications, such as the detection of counterfeit medicine, which is thought to cause hundreds of thousands of deaths each year,” said Dr Fernando da Cruz Vasconcellos, Post-Doctoral Researcher in Professor Chris Lowe's group and a co-author of this study.

For more information on this story, contact Sarah Collins on sarah.collins@admin.cam.ac.uk. 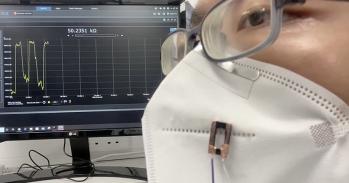