The Open University, the University of Oxford and the University of Cambridge are pleased to announce the success of their bid for funding for the Open-Oxford-Cambridge Arts and Humanities Research Council Doctoral Training Partnership, which will create nearly 400 new doctoral places in the arts and humanities.

The unique collaboration between Oxford, Cambridge and the Open University opens up exciting new prospects for the next generation of doctoral research students in the Arts and Humanities

The Open-Oxford-Cambridge AHRC DTP is a consortium of the three universities for doctoral training and funding in the Humanities. The DTP is underpinned by world-class research and training environments, supported by strategic partnerships with the BBC World Service, the National Trust and British Telecom, and is national and international in mindset, and determined to take a leading role in shaping the future of doctoral training in the UK.

The AHRC is the UK’s largest funder of postgraduate training in the arts and humanities, and plays an essential role in supporting the next generation of highly capable researchers. By working together, the AHRC, the Open University, and the Universities of Oxford and Cambridge are able to commit to investing in this partnership over its lifetime.

Professor David Rechter, incoming Director of the Open-Oxford-Cambridge AHRC DTP, said: “I am pleased by the success of our bid, and look forward to recruiting our first cohort of students next year. Supported by our partners the National Trust, the BBC World Service and British Telecom, the Open-Oxford-Cambridge DTP will offer students a wealth of opportunities to pursue research and engage in training, and to learn from each other as part of a large multi-disciplinary group. These opportunities will equip our DTP students with the research expertise and skills that will allow them to go on to wide range of careers in academia and beyond.”

Professor Martin Millett, Head of the School of Arts and Humanities at Cambridge, said: “The success of this bid is excellent news. The unique collaboration between Oxford, Cambridge and the Open University opens up exciting new prospects for the next generation of doctoral research students in the Arts and Humanities.”

Professor Edward Harcourt, the AHRC’s Director of Research, Strategy and Innovation, said: “The AHRC is delighted to announce its renewed commitment to the Doctoral Training Partnerships model. Our support for the next generation of arts and humanities researchers is critical to securing the future of the UK arts and humanities sector, which accounts for nearly a third of all UK academic staff, is renowned the world over for its outstanding quality, and which plays a vital part in our higher education ecosystem as a whole.

“We were extremely pleased with the response to our call, which saw high-quality applications from across the UK from a variety of diverse and innovative consortia, each with a clear strategy and vision for the future support of their doctoral students.”

Professor Kevin Hetherington, Pro-Vice-Chancellor (Research and Academic Strategy), The Open University, said: “The Open University is delighted that the AHRC has chosen to recognise the commitment to innovation and diversity inherent in the Open-Oxford-Cambridge DTP, and looks forward to participating fully in the delivery of an exciting training programme for our PhD students.”

Professor Karen O’Brien, Head of the Humanities Division, University of Oxford, said: “This is good news and an endorsement of our collective commitment to developing the next generation of Humanities scholars. We are looking forward to working with the Open University, Cambridge, the AHRC and our strategic partners to deliver a truly exciting opportunity to our consortium students.”

Stephen Cassidy, Chief Researcher, System Science, BT Labs, said: “As a communication company deeply rooted in the interaction between people, communities and businesses, BT sees great benefit in being part of this DTP. Interaction with the students and academics will extend our understanding of ethical, legal and social ramifications of the possible directions the industry as a whole could (and is) embarking on. These are issues of international scale, and we are pleased to link with the DTP and to provide further links with our research collaborations around the UK and the globe.”

Jamie Angus, Director, BBC World Service Group, said: “The objectives of the Consortium and the Doctoral Training partnership fit very well with the BBC World Service’s objectives; The BBC World Service Group provides independent impartial journalism to nearly 350 million people around the world each week, across cultural, linguistic and national boundaries.  We look forward to working with world-class doctoral students in the Humanities drawing on their research skills and subject expertise, as well as making the most of the huge range of languages studied at Oxford, Cambridge and the OU. Working together we will play our part so that the Consortium can provide DTP-funded students with skills and experience they need to communicate their ideas beyond academia so that they may be better able to reach a wider audience.”

Nino Strachey, Head of Research and Specialist Advice at the National Trust, said: “The National Trust is delighted at the success of the bid and excited to work with students and staff from these internationally recognised universities and partners. With a long history of hosting and co-supervising PhDs, we look forward to offering opportunities for students to gain experience of the heritage sector and to work with Europe’s largest conservation charity.”

Information on how to apply for scholarships via the Open-Oxford-Cambridge AHRC Doctoral Training Partnership for entry in 2019/20 will be available from www.oocdtp.ac.uk from 1 September 2018. 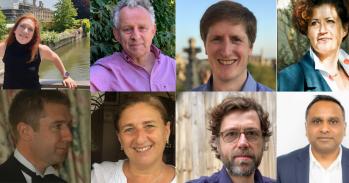 Faculty of English on the University's Sidgwick Site, home to many of the faculties and departments from the School of Arts and Humanities.