Eye contact with your baby helps synchronise your brainwaves

Making eye contact with an infant makes adults’ and babies’ brainwaves ‘get in sync’ with each other – which is likely to support communication and learning – according to researchers at the University of Cambridge.

When the adult and infant are looking at each other, they are signalling their availability and intention to communicate with each other

When a parent and infant interact, various aspects of their behaviour can synchronise, including their gaze, emotions and heartrate, but little is known about whether their brain activity also synchronises – and what the consequences of this might be.

Brainwaves reflect the group-level activity of millions of neurons and are involved in information transfer between brain regions. Previous studies have shown that when two adults are talking to each other, communication is more successful if their brainwaves are in synchrony.

Researchers at the Baby-LINC Lab at the University of Cambridge carried out a study to explore whether infants can synchronise their brainwaves to adults too – and whether eye contact might influence this. Their results are published today in the Proceedings of National Academy of Sciences (PNAS).

The team examined the brainwave patterns of 36 infants (17 in the first experiment and 19 in the second) using electroencephalography (EEG), which measures patterns of brain electrical activity via electrodes in a skull cap worn by the participants. They compared the infants’ brain activity to that of the adult who was singing nursery rhymes to the infant.

As anticipated, the researchers found that infants’ brainwaves were more synchronised to the adults’ when the adult’s gaze met the infant’s, as compared to when her gaze was averted Interestingly, the greatest synchronising effect occurred when the adults’ head was turned away but her eyes still looked directly at the infant. The researchers say this may be because such a gaze appears highly deliberate, and so provides a stronger signal to the infant that the adult intends to communicate with her.

In the second experiment, a real adult replaced the video. She only looked either directly at the infant or averted her gaze while singing nursery rhymes. This time, however, her brainwaves could be monitored live to see whether her brainwave patterns were being influenced by the infant’s as well as the other way round.

This time, both infants and adults became more synchronised to each other’s brain activity when mutual eye contact was established. This occurred even though the adult could see the infant at all times, and infants were equally interested in looking at the adult even when she looked away. The researchers say that this shows that brainwave synchronisation isn’t just due to seeing a face or finding something interesting, but about sharing an intention to communicate.

Dr Victoria Leong, lead author on the study said: “When the adult and infant are looking at each other, they are signalling their availability and intention to communicate with each other.  We found that both adult and infant brains respond to a gaze signal by becoming more in sync with their partner. This mechanism could prepare parents and babies to communicate, by synchronising when to speak and when to listen, which would also make learning more effective.”

Dr Sam Wass, last author on the study, said: “We don’t know what it is, yet, that causes this synchronous brain activity. We’re certainly not claiming to have discovered telepathy! In this study, we were looking at whether infants can synchronise their brains to someone else, just as adults can. And we were also trying to figure out what gives rise to the synchrony.

This research was supported by an ESRC Transformative Research Grant to Dr Leong and Dr Wass. 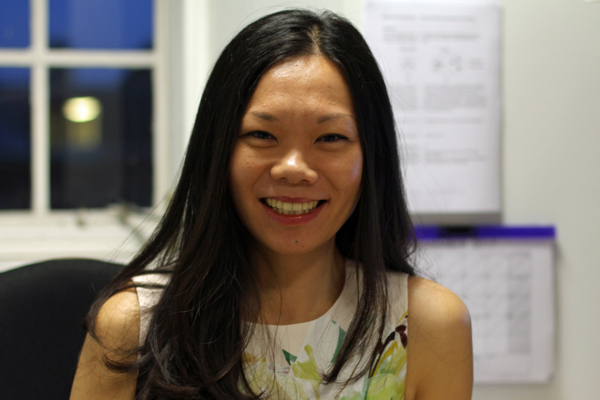 Dr Victoria Leong is an Affiliated Lecturer at Cambridge’s Department of Psychology, and also an Assistant Professor of Psychology at Nanyang Technological University, Singapore. Her research aims to understand how parents and infants communicate and learn from each other, and the brain mechanisms that help them to interact effectively as social partners.

“The Baby-LINC lab is designed to look like a home living room so that mothers and babies feel comfortable,” she says.  In the lab, they use a wireless EEG system to measure infants’ brain activity, which means that babies don’t have to be tethered to a computer and we can conduct recordings for longer periods of time. “This is invaluable if the baby needs a nap or a nappy change in-between doing our tasks!”

Dr Leong says she is passionate about “real-world neuroscience”. In other words, “understanding and not ignoring the very real – and often very messy – human social contexts that infiltrate brain processes”. This means that in addition to world class facilities and methods, the ability to collect robust data also depends on keeping the infants relaxed and happy. “Many a tantrum can be averted by the judicious and timely application of large soapy bubbles and rice cakes. The ability to blow large charming bubbles thereafter became a key criteria for recruiting research assistants!”

The research project came about “over a cup of tea [with Sam Wass] and a notepad to scratch out some frankly outlandish ideas about brain-to-brain synchrony”. They received £3,995 with the help of Cambridge Neuroscience and Cambridge Language Sciences for a pilot project and within a year went on to secure an ESRC Transformative Research Grant, which allowed them to significantly scale-up research operations, and to build the first mother-infant EEG hyperscanning facility in the UK (the Baby-LINC Lab).

“Cambridge is one of probably only a handful of highly-creative research environments in the world where young, untested post-doctoral researchers can organically come together, develop ambitious ideas, and have the support to try these out,” she says. “I am very proud of our humble beginnings, because they remind me that even a small handful of resources, wisely invested with hard work, can grow into world-class research.”