Researchers have discovered that honey bees are able to share immunity with other bees and to their offspring in a hive by transmitting RNA ‘vaccines’ through royal jelly and worker jelly. The jelly is the bee equivalent of mother’s milk: a secretion used to provide nutrition to worker and queen bee larvae.

Bees share ‘transmissible RNA’ among members of the colony, likely as a way of sharing immunity

The findings suggest new ways to protect bees against viruses and the deadly Varroa mite that have been responsible for the recent dramatic decline in honey bee populations. Since around one third of the human diet globally is dependent on honey bee pollination, we need solutions urgently to help maintain flourishing bee colonies, for our food security and sustainability.
Dr Eyal Maori from the Wellcome Trust/Cancer Research UK Gurdon Institute, University of Cambridge, and his collaborators in Israel and the USA had been trialling a new type of antiviral therapy for bees when they got a hint that the bees were able to transmit biologically-active RNA molecules between colony members. The scientists today publish the evidence for such a bee-to-bee RNA transfer phenomenon in the journal Cell Reports.
These transmissible RNA molecules are produced by the honey bee’s genes and by disease agents such as viruses. Unlike other RNA in the body, these RNA molecules do not code for protein. Instead, they play a direct role in immunity, gene regulation and other biological mechanisms.
In previous studies, Maori and colleagues fed bees with RNA fragments that included a segment of an RNA virus. They found that similar to how vaccines work, the dietary RNA activated an immune response that prevented disease and death when hives were later exposed to the live virus. Intriguingly, the colony maintained a healthy performance for several months after treatment had finished, suggesting that it was still immune to infection – even though the original treated bees would have died off and been replaced by new generations. This suggested that the immunising RNA fragments were being passed among colony members as well as across generations.
In the study released today, the researchers demonstrated that dietary RNA is taken up from the ingestion system into the bee’s circulatory fluid and spread to the jelly-secreting glands. The dietary RNA is then secreted with the jelly and taken-up by larvae fed on the jelly.
While scientists have previously shown in plants and animals that movement of RNA between cells within an organism is possible, these findings identify a molecular mechanism for transmission of RNA molecules between organisms.

Honey bees. Courtesy of Steve Bates under a CC license. 2 of 2
“We found that RNA spreads beyond individual honey bees, being transferred not just between parents and their progeny, but also among individuals in the hive,” says Maori.
Further experiments showed that transmissible RNA was able to activate a mechanism called 'RNA interference' to block the activity of some genes and reduce the production of certain honey bee proteins. Importantly, RNA interference is known to provide defence against viral infection in honey bees and other organisms. In other words, these RNA molecules are likely acting to immunise the bees against infections.
The researchers next analysed the worker and royal jellies and revealed diverse types of naturally occurring RNA, some derived from bee genes and some from pathogens such as fungi and infectious viruses, suggesting that over time the bees had developed – and shared – immunity to these pathogens.
"Our findings demonstrate that bees share ‘transmissible RNA’ among members of the colony, likely as a way of sharing immunity among members and generations in the hive and to enable other bees to adapt to different environmental conditions," says Maori.
In a second study, published last month in the journal Molecular Cell, Maori, working with Professor Eric Miska's lab at the Gurdon Institute, investigated how RNA, which is an unstable molecule, is transferred through the jelly diet. They found that an abundant jelly ingredient, Major Royal Jelly Protein-3 (MRJP-3), binds the RNA to form granules that concentrate and protect it from environmental damage. This is the first identification of RNA granules with functions outside cells and organisms.
Maori added: "Honey bees have evolved a type of ‘glue’ that binds RNA into granules, making it more stable and so able to be shared with other bees. If we can harness this technology, we might be able to use it to develop new ‘vaccines’ that could be used in agricultural settings, in particular to help immunise bees against the devastating losses being suffered by their colonies.
“It is possible that this honey bee protein may even have applications, too, for new vaccines and medicines for humans.”
References:
E. Maori et al. 'A transmissible RNA pathway in honey bees.' Cell Reports; 2 May 2019; DOI: 10.1016/j.celrep.2019.04.073.
E. Maori et al. 'A secreted RNA binding protein forms RNA-stabilizing granules in the honeybee royal jelly.' Molecular Cell; 18 April 2019; DOI: 10.1016/j.molcel.2019.03.010.

This work was supported by the Orion Foundation and the Israel Science Foundation, a Marie Curie Intra-European Fellowship for Career Development, a Leo Baeck Scholarship and a Herchel Smith Postdoctoral Fellowship a Cancer Research UK Programme Grant and a Wellcome Investigator Award; and by a core grant to The Gurdon Institute from Cancer Research UK and the Wellcome Trust. 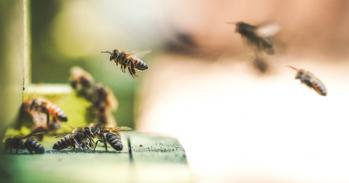 Think of honeybees as ‘livestock’ not wildlife, argue experts

Credit: Courtesy of Cam Miller under a CC license.