On matters of gender, Charles Darwin was supposedly an arch-conservative - but new research suggests that he actively helped women who were striving for an equal footing in society.

Darwin was no feminist, but our research has shown that his views on gender were a lot more complex than has been acknowledged in the past

As a man who, when working out whether to marry, once reasoned that a wife was “better than a dog, anyhow” Charles Darwin is not known to history as a leading advocate of gender equality.

Controversial though his views on other subjects may have been, historians have typically seen the great scientist as the epitome of the Victorian conservative when it came to gender. Famously, Darwin even stated that there were fundamental “differences in the mental powers of the sexes”.

Now, though, it seems that there may have been more to Darwin’s views on gender than he allowed into the public eye.

New research into the inner world of the great naturalist - focusing in particular on his private letters - has revealed evidence that he actively encouraged and helped pioneering women scientists to break into what, in the 19th century, was seen as strictly a man’s domain. Perhaps more dramatically, the study has also linked Darwin to women who fought for equality between the sexes, before suffragettes were even on the political map.

The research is the work of  the “Darwin and Gender” project, funded by The Bonita Trust*, and part of the Darwin Correspondence Project based at Cambridge University Library, which for the past four years has been studying the full range of Darwin’s writings on gender - including those which were never published. Its results, including resources for both school and university students, are being released via its own website, and in a new film, Darwin’s Women.

Dr Philippa Hardman, Research Associate on the “Darwin and Gender” project, said: “Darwin was no feminist, but our research has shown that his views on gender were a lot more complex than has been acknowledged in the past.”

“As a published scientist, Darwin usually reflected and reinforced middle-class, Victorian gender ideology, which saw women as domestic creatures who should look after children and the home. In his letters, though, we encounter a world of private thoughts and actions, which defied those ideals.”

The research has centred on a body of letters which Darwin exchanged with about 150 different female correspondents during the course of his life, ranging from close family members, to more distant figures around the world. These are among more than 15,000 that Darwin either wrote or received; most are in the archive of his scientific papers at Cambridge University Library, and all of them are being researched and published by the Correspondence Project. 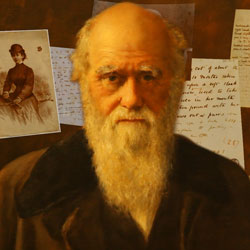 In his book Descent of Man and Selection in Relation to Sex (1871), Darwin famously attacked John Stuart Mill’s feminist tract, The Subjection Of Women, arguing that: “Woman seems to differ from man in her mental disposition, chiefly in her greater tenderness and less selfishness”.

The letters show, however, that in private he relied on a range of women correspondents for help with some of his most serious work. These included his own daughter, Henrietta, who was heavily involved in editing Descent - a book which counted as positively risqué by the standards of the time for its explicit information about sexual display. Other correspondents included scientists like Mary Treat, the New Jersey-based naturalist, who felt compelled to make her writing style sound more “feminine” in published form, but tellingly, with Darwin, is technical and direct.

Darwin did more than draw on these women as sources; he also helped many  to progress their own scientific careers. In a letter of 5 January, 1872, to Treat about her work on butterflies, we find him telling her “to publish the result in some well-known scientific journal”. In another letter, from 1877, he writes to Eleanor Mary Dicey concerned about the possibility that girls might be deterred from studying physiology simply because they are female.

Beyond scientific circles, however, there is also evidence of Darwin’s lively correspondence with women who challenged the mores of the time in a more general sense. These include Florence Dixie, a traveller, writer and hunter, who actively endorsed votes for women and equality in marriage. In 1890 she published a novel called Gloriana which invoked a “fantasy world” in which men and women lived as equals.

Other correspondents included Emily Fairbanks Talbot, who campaigned to give women more equal access to education in the United States, and Lydia Becker, the Manchester-based secretary of the National Society of Women’s Suffrage. Becker’s numerous letters included one on the headed paper of the Society, and Darwin contributed scientific papers of his own to be read out at meetings of the so-called “Manchester Ladies’ Literary Society” - in reality much more of a science society. It seems unlikely that he was completely oblivious of her political views.

“There are a number of reasons why Darwin may not have openly expressed his attitudes towards gender equality in public,” Hardman said. “Mill, following The Subjection Of Women, was openly ridiculed as ‘feminine’ - not a portrayal that Darwin needed, given the masculinity associated with academic science at the time. It is also possible that as the proponent of controversial scientific views, he simply felt that further public wrangling on the question of women’s rights was something that he could ill afford.”

“It’s clear that despite what he said in print about women’s intellectual capabilities and social roles, Darwin’s private thoughts and actions were more nuanced,” Dr Alison Pearn, Associate Director of the Darwin Correspondence Project said. “He was very comfortable collaborating with women like Treat and Becker and encouraged their scientific work wherever possible.”

Many would still question whether society has achieved the utopia that Florence Dixie invoked in Gloriana. Hardman regards the stories that emerge from the correspondence as a message as well as an inspiration. “If we really want to honour the achievements of the women whose words we read in Darwin’s letters, we should do more than celebrate their lives,” she concludes in the film. “We should pick up where they left off.”

*The Bonita Trust was renamed the Parasol Foundation in 2015

Still from the film "Darwin's Women".