Cambridge University Library plans to raise £1.1m to purchase an outstanding Biblical manuscript. Dating from the 6th or 7th century, Codex Zacynthius is a palimpsest that offers scholars a key to understanding the way in which the text of St Luke’s Gospel was transmitted as Christianity spread.

The presence of the undertext, first discovered in the 19th century and critical to establishing the transmission of St Luke’s Gospel, places Codex Zacynthius among the top flight of Biblical manuscripts.

Cambridge University Library, renowned throughout the world for its faith collections, announced yesterday that it is raising funds to acquire a remarkable manuscript known as Codex Zacynthius.

Codex Zacynthius was deposited at Cambridge University Library in 1984 by the British and Foreign Bible Society, which has owned it for almost 200 years. At first glance the Codex is a text compiled in the 13th century from passages taken from the New Testament, but its true origins are much earlier.

The Bible Society wishes to sell Codex Zacynthius as part of an exceptional exercise to release funds to establish a new visitor centre in Wales. Conscious of the interest in the manuscript, the Bible Society has given the UL first refusal to purchase. The acquisition of Codex Zacynthius by the UL would allow scholars and public audiences to discover more about the history of one of the world’s most important manuscripts, by using science to unlock its ancient secrets.

The huge appeal of this unique item lies in its hidden backstory. Codex Zacynthius is a palimpsest: a manuscript from which the text has been scraped or washed off in order for it to be used again. The recycling of manuscripts was common practice at a time when writing surfaces were precious, few books were produced, and a tiny percentage of the population was literate. 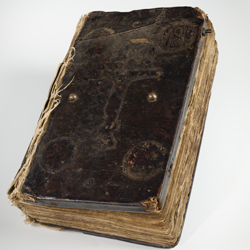 The 176 leaves of Codex Zacynthius are made of vellum – treated animal hide. The surface of the vellum was first used in the 6th or 7th century when it was inscribed in Greek with the text of Luke 1:1–11:33 – a layer of writing now known to scholars as the ‘undertext’. In the 13th century this was partially scraped away and written over with the text of an Evangeliarium, a book composed of passages from the Four Gospels – this is the ‘overtext’.

“The presence of the undertext, first discovered in the 19th century and critical to establishing the transmission of St Luke’s Gospel, places Codex Zacynthius among the top flight of Biblical manuscripts. Furthermore, it is the oldest extant New Testament manuscript with a commentary alongside the text, making it a witness to both the development and interpretation of St Luke’s Gospel,” said Lord Williams of Oystermouth, Master of Magdalene College and former Archbishop of Canterbury. 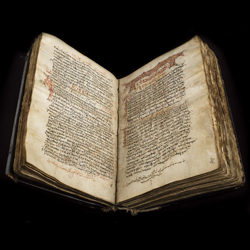 Unusually, the Greek undertext, written in uncials (capital letters) contains very few copying errors, suggesting that it was the product of an expert scribe. The text would have looked remarkably beautiful in its day and the Codex would have been an extremely precious item.

Lord Williams added: “The discovery and identification of the undertext represents a fascinating detective story. By saving the manuscript, we hope that multispectral imaging techniques – such as those used on the Archimedes Palimpsest to reveal mathematical theorems written in the 10th century under Christian texts written in the 13th – will enable scholars to recover fully the hidden text.”

The Codex, measuring 35 cm by 28 cm, is now in a 16th-century Greek-style goatskin binding that shows how the manuscript has been treasured over the centuries – tiny hand-stitched repairs secure tears in the goatskin and the cover bears traces of a cross and other decorations long since lost. 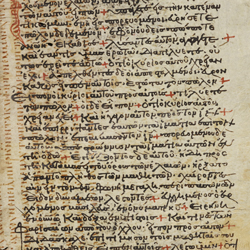 The place of production of Codex Zacynthius is unknown. It was presented to the Bible Society in 1821 by General Colin Macaulay, as a gift from Prince Comuto of Zakynthos. Macaulay, a supporter of the Society, was also a leading figure in the campaign for the abolition of slavery.

Prince Comuto’s house on Zakynthos was described by an early 19th-century British traveller as ‘a retreat to all foreigners of distinction, who have free access to the literary treasures of an excellent library, and enjoy the best society which this part of the world produces’.

“Codex Zacynthius would greatly enhance the UL’s magnificent faith collections which include important texts from Judaism, Islam, Buddhism, Hinduism and Jainism as well as from Christianity. In 2011 we launched a programme to make these collections freely accessible to students, researchers and the public through the Cambridge Digital Library,” said Anne Jarvis, University Librarian.

“Purchasing Codex Zacynthius would give us the opportunity to digitise the manuscript and share it on a global scale as well as creating an exciting virtual exhibition to tell the fascinating story of a unique document that can still shed new light on the text of the Christian Bible after more than 1300 years.”

The UL has until the end of February 2014 to raise funds for the purchase of Codex Zacynthius, which is being handled by the Bible Society’s agents, Christie’s. For those who would like to make a donation to the appeal, please go to http://www.alumni.cam.ac.uk/giving/direct.php?table=nonschoolprojects&id=302

For more information about this story contact Alexandra Buxton, Office of Communications, University of Cambridge, amb206@admin.cam.ac.uk 01223 761673

More about the collections

The collections at Cambridge University Library include celebrated Christian manuscripts such as the Codex Bezae and Book of Deer, alongside material from other faiths, such as the Genizah Collection of medieval Jewish documents and important Islamic and Buddhist material. Cambridge University Press is the world’s oldest Bible publisher and has been printing Bibles since 1591.

Codex Zacynthius: at the end of a chapter of the Evangeliarium, the undertext is clearly legible.