Attack of the Zeppelins

An investigation into how the Zeppelins worked, and how they were defeated, led by Cambridge engineer Hugh Hunt, forms the subject of a Channel 4 documentary.

Shooting down a massive hydrogen balloon sounds pretty easy. Actually it was quite the opposite.

The battle to bring down the Zeppelins during World War I is being revisited in a new documentary which explains how these supposed floating death-traps successfully brought terror to Britain’s skies.

Attack Of The Zeppelins, which aired on Channel 4 on Monday, 26 August, and is now available on 4OD, follows University of Cambridge engineer Dr Hugh Hunt as he examines the science behind the Zeppelins’ success, and their ultimate defeat.

Among other revelations, the programme shows how the unlikely use of cows’ intestines became so critical to German plans to bomb the British public, that sausage-making became illegal in areas under German control!

Hunt also tells the story of how British engineers came up with new ideas to stop the giant airships, after it became all too apparent that shooting at them with machine-guns was not enough.

In addition, the film records a remarkable personal discovery, as he finds out quite by chance that the man behind the decisive innovation which won the battle was none other than his own Great Uncle.

It is not the first time that Hunt has revisited remarkable feats of wartime engineering. His previous investigations have looked at how some of the best-known exploits of World War II, such as the Dambusters Raid and the Great Escape, were accomplished. 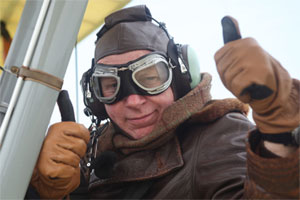 For his latest project, however, he turned instead to the air raids of World War I, which foreshadowed the Blitz 30 years later, and shocked the British public by taking war to the civilian population for the first time in centuries.

“You would think that it’s pretty straightforward given the Hindenburg disaster in 1937. But while shooting down a massive hydrogen balloon sounds pretty easy, actually it was quite the opposite. For the best part of two years, these things were able to fly over Britain, dropping bombs and causing havoc. We wanted to know more about how that worked, and how they were beaten.”

Conceived as a way to break British civilian morale, the Zeppelin raids never caused casualties on anything like the scale that would have been necessary to change the course of the war. Nevertheless, for civilians who witnessed them, the attacks, which began in January 1915, were a shocking experience.

Over the next two years, London’s East End and other towns and cities in east and southern England, such as Hull, King’s Lynn, and Great Yarmouth, found themselves targets. Silent and difficult to anticipate, the Zeppelins were a new kind of terror weapon which the British were slow to counter. When the raids ended in 1917, 77 of the 115 German airships had been shot down, but 1,500 British citizens had been killed in air raids.

Winston Churchill himself had written off the Zeppelins as “enormous bladders of combustible and explosive gas”, but in practice they proved exceptionally difficult to bring down. For the film, Hunt decided to investigate why, by firing at bags of hydrogen himself.

“If you shoot a bullet at a balloon of hydrogen, all you get is a small hole,” he explained. “There were 50 thousand cubic metres of gas in a Zeppelin, and by putting a few holes in it, all you were doing was depriving it of a few cubic metres. It barely made any difference.” 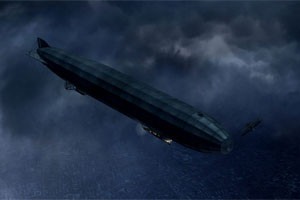 The documentary also reveals the ingenious and slightly gruesome method by which hydrogen, which is a difficult gas to contain into the first place, was held by Zeppelins in the first place. Records suggested that the Germans used the intestines of cows, but it was not clear how this was achieved.

To find out, Hunt and his colleagues took the unlikely measure of visiting a sausage factory in Middlesbrough, where cow’s intestines are used to make sausage skins. By following the method used there, they worked out that by making the skins wet, stretching them, and allowing them to dry again, they were bonded together to form ideal vessels for hydrogen gas.

There was a drawback for the German public, however, as it took the guts from more than 250,000 cows to make a single airship. The animal’s intestine became so precious that German sausage making was temporarily forbidden.

The film also revisits the method by which the British finally put an end to the Zeppelin threat, by alternately firing explosive and incendiary bullets into the balloons. By doing so, they were able to pierce the balloon first, enabling oxygen to mix with the hydrogen, before setting the lethal mixture on fire.

One final revelation for Hunt was that the designer of the incendiary bullets that set the Zeppelins alight was none other than his own Great Uncle, Jim Buckingham.

“I remember my father talking about an Uncle Jim who had worked on tracer bullets later, in World War II, but for some reason I had never made the connection,” he said. “It wasn’t until I was chatting to my cousin about it that it clicked, and I realised that we were talking about the same person.”

Attack Of The Zeppelins will be shown on Channel 4 at 8pm on Monday, 26 August. For more information, visit: http://www.channel4.com/programmes/attack-of-the-zeppelins

Screenshot from Attack Of The Zeppelins, which airs on Monday