Scientists at the University of Cambridge have uncovered striking similarities in how two distantly related plants defend themselves against pathogens despite splitting from their common ancestor more than 400 million years ago.

Researchers from the Sainsbury Laboratory at the University of Cambridge compared how two distantly related plants – a common liverwort (Marchantia polymorpha) and a flowering plant, wild tobacco (Nicotiana benthamiana) – defend themselves against an aggressive pathogen (Phytophthora palmivora).
This is the first time such a comparison has been undertaken. By studying how these distantly related plants – which split from their common ancestor roughly 400 million years ago – respond to pathogen infections, the research team discovered a suite of microbe-responsive gene families that date back to early land plant evolution.
Our current understanding of how plants successfully defend against disease-causing pathogens mainly originates from studying economically important crop plants and a small number of closely-related flowering plant model systems. Very distantly-related plants, such as non-flowering liverworts that are believed to resemble some of the first land plants, are often overlooked. As a result, not much was known about how these plants defend themselves from pathogens or how plant defence strategies have evolved.
Published in Current Biology, the study's identification of these evolutionarily conserved genes is shedding new light on the strategies that were likely critical for the expansion of plants onto land.
“We have shown that molecular responses to pathogen infection typical of modern flowering plants are common to very distantly-related land plants and may therefore be more ancient than we previously thought,” said Dr Sebastian Schornack, who led the research team that undertook the study. “Despite fluctuating environmental pressures over a broad evolutionary timescale, these conserved genes have retained their capacity to confer pathogen protection in plants, including in important agricultural crops.”

Microscopic image of a liverwort where part of it has accumulated purple pigment (left). The pathogen can be detected as red fluorescence and it only sporulates in green tissues and does not accumulate well in purple tissues with activated defence (right). Image: Philip Carella 1 of 2

A Marchantia liverwort, where the defense genes and the production of purple pigment was activated in specific sectors only. Image: Philip Carella 2 of 2
Bioinformatics expert, Dr Anna Gogleva, identified a subset of one-to-one corresponding genes (single-copy orthologs) in the liverwort and wild tobacco and analysed their level of activity during the infection. A number of different genes were activated in both plants, but a set of metabolic genes involved in phenylpropanoid (flavonoid) biosynthesis were highly activated in response to infection.
These gene families are often associated with the stress-response in flowering plants, providing increased protection against biotic or abiotic stresses caused by chewing insects, pathogens and nutrient or light stress. However, this was the first time that these genes had been functionally linked to pathogen defence strategies in liverworts.
“Pathogen zoospores germinate on the surface of liverworts and eventually colonise the liverwort tissues, but in some areas we saw an accumulation of a purple/red pigment in the liverwort tissues where the pathogen was rarely detected,” said Dr Philip Carella, lead author of the study.
“We produced liverwort plants with mosaic pigment patterns – resembling military camouflage fatigues – that allowed us to compare pathogen resistance in pigmented and non-pigmented areas of the same plant and found the pigment provided some resistance to pathogen infection.”
The enormous diversity of traits and species that we see in modern plants today speaks to the millions of years of evolution that enabled plants to survive in dynamic and contrasting environments across the globe.
“The conflict between organisms can be a very powerful selective pressure that guides their evolutionary trajectory,” said Dr Schornack. “Genes involved in fighting specific pathogens can evolve rapidly – both in plants and animals. But we have also now found these broadly-conserved genes responding to pathogen infection in very distantly-related plants, which suggests that land plants have retained a likely ancient pathogen deterrence strategy that is much too useful to lose.
“Fossil evidence shows that plants have engaged in close-interactions with microbial life forms throughout their evolutionary history. Our research has uncovered a common set of pathogen-responsive genes shared in early-divergent land plants and more evolutionarily young flowering plants, which are all likely to have been critical for the expansion of plants onto land. Further comparative studies focusing on other distantly related land plants and their aquatic algal predecessors should reveal even more information about the evolution and role of these vital gene families.”
Reference
Philip Carella, Anna Gogleva, David John Hoey, Anthony John Bridgen, Sara Christina Stolze, Hirofumi Nakagami, and Sebastian Schornack. Conserved Biochemical Defenses Underpin Host Responses to Oomycete Infection in an Early-Divergent Land Plant Lineage. Current Biology (11 July 2019); DOI: 10.1016/j.cub.2019.05.078

This work was funded by the Gatsby Charitable Foundation, the Royal Society, the BBSRC OpenPlant initiative, the Natural Environment Research Council (NERC; NE/N00941X/1), and a Natural Sciences and Engineering Research Council of Canada (NSERC) postdoctoral fellowship to Philip Carella. Proteomic work performed in the Nakagami lab was supported by the Max-Planck-Gesellschaft. 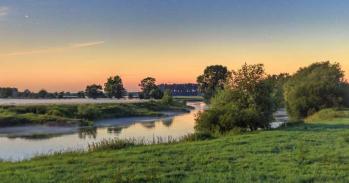 Sebastian Schornack and Philip Carella of the Sainsbury Laboratory, University of Cambridge