Waterworld: can we learn to live with flooding?

Flash floods, burst riverbanks, overflowing drains, contaminants leaching into waterways: some of the disruptive, damaging and hazardous consequences of having too much rain. But can cities be designed and adapted to live more flexibly with water – to treat it as friend rather than foe?

In December 2015, Storm Desmond hit the north of the UK. In its wake came floods, the misery of muddy, polluted water surging through homes and the disruption of closed businesses, schools and roads.

Rapid urban growth and progressively unpredictable weather have focused attention on the resilience of cities worldwide not just to extreme events, but also to heavier-than-normal rainstorms, and raised questions as to how flood risk can be managed.

There is of course no ‘one-size-fits-all’ strategy. For some areas, defence is a possibility. For others, retreat is the only option. “But for those unable to do either, we need to fundamentally rewrite the rule book on how we perceive water as a hazard to towns and cities,” says Ed Barsley, PhD student working with Dr Emily So in the Cambridge University Centre for Risk in the Built Environment (CURBE).  Barsley believes that adaptation and planning for resilience can provide a unique opportunity for increasing the quality of towns and cities (see panel).

Dr Dick Fenner from Cambridge's Department of Engineering agrees that resilience to water should be regarded positively. He is part of the UK-wide Blue–Green Cities project, which is developing strategies to manage urban flood risk in ways that also pay dividends in many other areas, through ‘greening’ the city. “We want to turn rainfall into a win-win-win event,” he says.

When it comes to dealing with floods, one of the major difficulties that many cities face is the impermeability of the built environment. In a city that is paved, concreted and asphalted, surface water can’t soak away quickly and naturally into the earth.

Newcastle city centre, for instance, is around 92% impermeable, and has suffered major flooding in the past. “The ‘flood footprint’ of the 2012 ‘Toon Monsoon’ caused around £129 million in direct damages and £102 million in indirect damages, rippling to economic sectors far beyond the physical location of the event,” says Fenner.

“Traditionally, cities have been built to capture water run-off in gutters and drains, to be piped away. But where is away? And how big would we have to build these pipes if the city can’t cope now?” he adds. The principal behind a ‘Blue–Green City’ is to create a more natural water cycle – one in which the city’s water management and its green infrastructure can be brought together.

“Not only do they also provide a place for water to soak away,” says Fenner, “they can even create resources from water – such as generating energy from the water flow through sustainable drainage systems and providing places for amenity and recreation.”

All well and good but with a long list of potential ‘blue–green’ choices, and an equally long list of benefits, how do cities choose the best options? 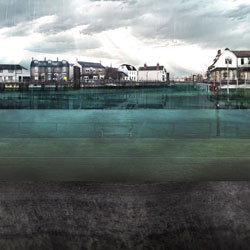 One of the major outputs of the Blue–Green Cities initiative is a ‘toolbox’ for authorities, planners, businesses and communities to help them decide. Using Newcastle University’s CityCat model, the team assessed how well green infrastructures performed in holding back surface flows, and used novel tracer techniques to follow the movement and trapping of sediments during intense storms. Then they mapped the benefits in a geographic information system (GIS) to identify physical locations that are ‘benefit hotspots’.

The tools were developed by evaluating the performance benefits of green infrastructure gathered from sites in both the UK and USA. As part of a recent 12-month demonstration study in Newcastle, a Learning Action Alliance network was set up with local stakeholders that has, says Fenner, led to new opportunities that reflect the priorities and preferences of communities and local residents.

Now, Newcastle City Council, the Environment Agency, Northumbrian Water, Newcastle University, Arup and Royal Haskoning DHV have combined to be the first organisations in the country to explicitly commit to a blue–green approach, as recommended by the research. The hope is that other local and national organisations will follow suit.

Embracing resilience, as these organisations are doing, is vitally important when dealing with natural hazards, says Emily So, who leads CURBE: “We should remember that flooding is a natural process and a hazard we need to learn to live with. It is often the disjointed configuration of the built environment that results in it being a risk to the communities. Our aim should be to design to reduce the impact of, and our recovery time from, this natural hazard.”

Fenner adds: “Continuing to deliver an effective and reliable water and wastewater service despite disruptive challenges such as flooding is hard, but vital; it requires continuous and dramatic innovation. In the future, we will see fully water-sensitive cities, where water management is so good that it’s almost as if the city isn’t there.”

The Blue–Green Cities project is funded by the Engineering and Physical Sciences Research Council (EPSRC), involves researchers from nine UK universities and is led by the University of Nottingham. A parallel project, Clean Water for All, funded by EPSRC and the National  Science Foundation, connects the team with researchers in the USA.

Flood risk as a driver for change

While the Blue–Green Cities project focuses on urban drainage at times of normal to excessive rainfall, Ed Barsley is more concerned with helping communities consider the consequences of extreme events.

“Floods are devastating in their impact and flood risk is often seen as a burden to be endured,” says Barsley, “but future proofing and planning for resilience can and should be used as a driver for increasing the quality of buildings, streets and neighbourhoods – a chance for exciting change in our cities.”

As a case study, Barsley is using the village of Yalding in Kent, which has endured physical, economic and psychological impacts as a result of flooding.

He looked at how each house in the village prepared for and was affected by its most recent flood, its location and building material, and even its millimetre threshold height; and then he looked at future flood risk scenarios. The result is a methodology for assessing resilience that can be used to help inform and plan for adaptation, and is transferable to other communities large or small across the UK and worldwide.

“When we communicated the risks to the community, we found that resilience means different things to different people. Understanding priorities can help them tailor their own strategy to be contextually appropriate,” explains Barsley, who is special advisor on flood risk in the South East to Greg Clark MP, Secretary of State for the Department for Communities and Local Government.

For homes in which resistance measures like flood barriers will be overcome, one option might be to regard the lower floor as a sacrificial space – an area that can be flooded without disrupting waste, power or water. In Yalding, there are examples of homeowners who have done just this and added an extra storey to their homes.

“I’d like to see resilience rewarded and for us to begin to live with water in a different manner. Embedding long-term resilience has huge potential for creating vibrant and enriching spaces.”