The man with a thousand brains

Forty million people worldwide are living with Alzheimer’s and this is only set to increase. But tiny brains grown in culture could help scientists learn more about this mysterious disease – and test new drugs.

In the dish, these specialist clearance cells, called microglia, are absent so the disease process is faster. One of the beauties of our models is that we can add microglia and see what the effect of the immune system is and if we can use it to make things better or worse

It sounds like something from a 1950s’ B-movie: scientists growing brains in the lab. It brings to mind images of dimly lit, cobweb-filled rooms with brains pulsating in glass tanks.

The truth, of course, is far less gothic. The Wellcome Trust/Cancer Research UK Gurdon Institute, where the research is taking place, is light, airy and hi-tech. But although Dr Rick Livesey, who leads the study, does not like to call them ‘mini-brains’, that is in essence what they are: clusters of millions of nerve cells, electrically active and networked to each other, and no bigger than a freckle. What makes these ‘brains’ particularly useful is that they are diseased – they have Alzheimer’s.

Almost 40 million people worldwide are living with Alzheimer’s disease, and as more people live into old age, this number is set to rise. For a disease first described in 1906, surprisingly little is understood about its mechanisms, and there are no treatment options to prevent or reverse its progress. We do know, however, that the disease is characterised by the build-up in the brain of two types of protein: beta-amyloid, which clumps together into ‘plaques’, and tau, which accumulates in nerve cells to form ‘tangles’. These proteins disrupt the behaviour of the nerve cells, which lose their connections and eventually die.

The standard way to study a disease is to use animals. Crudely speaking, you insert a human disease gene or series of genes into a mouse and observe the mechanisms that lead the animal to develop the disease. This approach is useful for asking specific questions, but doesn’t show the disease process in a cohesive way. It can lead to the development of drugs that treat the disease in mice but fail when it comes  to humans.

Instead, Livesey has turned to stem cells, building on research that won Sir John Gurdon, the man who gave his name to the institute at which Livesey now works, a Nobel Prize in 2012.

Most people who develop Alzheimer’s begin showing symptoms in later life, from their sixties onwards. However, a small number of people – less than 1% of cases – have a genetic form of the disease that runs in their families, caused by a single change in one of three genes. If you carry the mutation, you will get Alzheimer’s – and onset is typically in one’s thirties or forties.

Livesey takes skin cells from patients with this familial form of Alzheimer’s and reprogrammes them to become induced pluripotent stem cells, which resemble embryonic stem cells, with the ability to turn into almost any type of cell in the body. By guiding them to develop as neural stem cells, which create the brain’s nerve cells, he makes two-dimensional clusters of nerve cells that model the cerebral cortex, the area of the brain that is affected by Alzheimer’s. These clusters connect to each other, forming circuits – essential for modelling early stages of Alzheimer’s, which affects the ability of neurons to communicate with each other. It’s a very labour-intensive – and fraught – process that takes months. “We grow them in a sugar and salt mixture, and what do bacteria love but sugar and salt! You’re always paranoid you’re going to lose them,” explained Livesey.

These clusters allow the researchers to replay a disease process that takes 30 or 40 years but over three or four months. In humans, our immune system does its best to fight off the disease, but eventually this clearance mechanism gets overwhelmed. “In the dish, these specialist clearance cells, called microglia, are absent so the disease process is faster. One of the beauties of our models is that we can add microglia and see what the effect of the immune system is and if we can use it to make things better or worse.”

As well as allowing Livesey to study the fundamental biology of the disease, his mini-brains are powerful tools for screening potential drug candidates. To use animals for this purpose would mean using tens of thousands of mice which, as Livesey points out, “would be both impractical and ethically indefensible.” Livesey puts the clusters into all 96 wells of a plate the size of a mobile phone and adds a different compound to each well. “We do this every two days for a month, monitoring to see if the disease gets better. We might try different doses of the same compound – we say well look, this is fine with whacking great amounts, but will it ever work as a real drug at concentrations suitable for humans?” 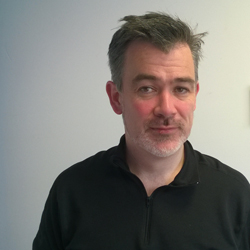 Thanks to a recent £2 million award from Alzheimer’s Research UK, Livesey, together with colleagues at University College London, has also begun work on modelling more common forms of the disease. These share the same pathology as the familial forms, but may arise through fundamentally different mechanisms. “We know there is some overlap between the two forms, but there’s a risk that we develop a treatment for familial Alzheimer’s which won’t work in the general population if the disease doesn’t start in the same way.”

The research does, however, pose an interesting ethical question: when is a model of a brain actually human? Livesey’s models are made up of human cells and have many of the properties of real brains, but they cannot learn, do not think and are not sentient – they are not ‘human’ in that sense. “All of the nerve cells we make are excitatory – they’re like ‘on’ switches. Real brains also have a second, inhibitory nerve cell type, which acts like an ‘off’ switch and modulates the neural circuits. These add an extra layer of complexity which is missing in our models.

“But honestly, we simply don’t understand the cellular basis for sentience, let alone consciousness, so we probably wouldn’t know it if we saw it. Nor are we clear whether it’s a scale or a complexity issue. Our neural clusters are tiny, only around a million nerve cells, whereas a real brain has about 86 billion. If we made it big enough, say a kilogram, would it become a human brain? Probably not, as we’re not capturing all the complexity of the system. So what if the brain model was smaller, but captured all the complexity, like a mouse brain – would that cause ethical concerns? It’s a question we cannot ignore as we move forward. But we’re still a long way off there yet.”

"Growing brains in the lab"