One man’s quest to create a library of everything, 500 years before Google Books was conceived, foreshadowed the challenges of ‘big data’ and our reliance on search algorithms to make sense of it all.

In some respects, the Biblioteca Hernandina, as it was then called, was the world’s first search engine.

129,864,880. That’s the number of books in the world, according to an estimate by Google Books, which since its launch in 2005 has been trying to scan them all, convert them to searchable text using optical character recognition and then make them publicly available online. Although Google Books’ hopes have been slowed by wrangles over copyright and fair use, if it succeeds it could become the largest online body of human knowledge ever available.

Half a millennium earlier in Seville, Spain, Hernando Colón (1488–1539) had the same ambitious aim: to create a library that would be universal in a way never before imagined because it would contain everything. And Colón really did try to collect everything: from precious manuscripts to books by unknown authors, from flimsy pamphlets to tavern posters, from weighty tomes to throwaway ephemera.

Colón’s bibliomania took him back and forth across Europe for three decades. According to Dr Edward Wilson-Lee, from Cambridge's Sidney Sussex College and the Faculty of English, he bought 700 books in Nuremburg over Christmas in 1521, before passing on to Mainz where he bought a thousand more in the course of a month. In a single year in 1530, he visited Rome, Bologna, Modena, Parma, Turin, Milan, Venice, Padua, Innsbruck, Augsburg, Constance, Basle, Fribourg, Cologne, Maastricht, Antwerp, Paris, Poitiers and Burgos, voraciously buying all he could lay his hands on.

Wilson-Lee has been working with Dr José María Pérez Fernández from the Universidad de Granada to research the life of Colón, the natural son of the great Italian navigator Christopher Columbus. In addition to creating his library, Colón accompanied his father on explorations of the new world and wrote the first biography of Columbus; he was also a ground-breaking mapmaker and gathered unparalleled collections of music, images and plants.

“Colón had an extraordinary memory and an obsession with lists,” says Wilson-Lee, whose research on Colón was funded by the British Academy. “Each time he bought a book, he would meticulously record where and when he bought it, how much it cost and the rate of currency exchange that day. Sometimes he noted where he was when he read it, what he thought of the book and if he’d met the author. As pieces of material culture, each is a fascinating account of how one man related to, used and was changed by books.”

This almost obsessive activity makes what now remains of his library – the Biblioteca Colombina, housed in a wing of Seville Cathedral – an incredibly important material resource to explore book history, travel and intellectual networks. “When pieced together,” he adds, “they give an account of one of the most extraordinary lives in a period filled with entrancing characters.”

Wilson-Lee describes Colón as having lived at the time of an “event horizon” of exponential change, in the same way that the advent of the internet has been for us today; only in Colón’s case it was the move from written manuscript to printed book.

“It simply became impossible for one man to read everything,” says Wilson-Lee. “Maybe in his youth, it would have been possible – there would have been few enough printed books. But as his library grew, he realised he needed to employ readers to work through each book and provide him with a summary – in effect the forerunner of the Reader’s Digest.”

As Colón’s vision of amassing all knowledge grew, so did something else: the need to add structure to the information he gathered. “It was one of the first ‘big data’ challenges,” says Wilson-Lee. “You might have the information but how do you make sense of it all?

“One of the fascinating aspects about the library is that it shows that sometimes the way in which knowledge becomes divided up is not in response to some kind of grand abstract reasoning, some kind of Eureka moment, it’s sometimes in response to a practical problem. In this case, ‘I’ve got 15,000 books, where do I put them?’” On a shelf seems reasonable, but even in this respect Colón was pioneering, says Wilson-Lee. 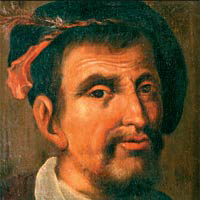 “In essence, he invents the modern bookshelf: row upon row of books standing upright on their spines, stacked in specially designed wooden cases.”

And a material problem of how to store things very quickly turns into an intellectual problem of which things belong together. It forces certain decisions. “As anyone who has walked through a library will know, order is everything,” explains Wilson-Lee. “The ways in which books can be ordered multiplies rapidly as the collection grows, and each of these orders shows the universe in a slightly different light – do you order alphabetically, by size or by subject?

“Hernando was acutely aware of this. He referred to unordered, or ‘unmapped’, collections as ‘dead’.”

He wanted his library not only to have everything but also to “provide a set of propositions about how the universe fits together,” he adds. “He viewed the Universal Library as the intellectual counterpart – the brain – to the world empire that Spain was aiming for in the 16th century. It was a fitting extension to his father’s grand ambitions to explore the globe.”

One of Colón’s innovations to make sense of his library was a vast compendium of book summaries, called the Libro de Epitomes. To create this, he set a team of sumistas – digesters of the thousands of books in the library – to work distilling each volume, leading towards his ultimate vision that all the knowledge in the world could be boiled down into just a few volumes: one for medicine, one for grammar, and so on.

Another was a blueprint for the Library using ten thousand scraps of paper bearing hieroglyphic symbols. “Each of the myriad ways they could be put together suggested a different path through the library, just as a different set of search terms on the internet will bring up different information. In some respects, the Biblioteca Hernandina, as it was then called, was the world’s first search engine.”

How these systems worked will be uncovered in books that Wilson-Lee and Pérez Fernández are writing about the man and his library, and also about how his accomplishments resonate with our own fast-changing networked world.

“For all that he died nearly five centuries ago, Hernando’s discovery of the world around him bears striking, sometimes uncanny, resemblance to the world that we are discovering today,” says Wilson-Lee. “The digital revolution has increased the amount of information available but how do you discern what’s useful from what’s useless? We are wholly reliant on search algorithms to order the internet for us. Hernando was just as aware that how you choose to categorise and rank information has immense consequences. It’s easy for us to forget this sometimes – to sleepwalk our way into knowledge collection and distribution.”

Today, just over 3,000 books of Colón’s library remain. Until now, the life of this extraordinary man has largely escaped notice; it’s taken another revolution to grasp how visionary he was in recognising the power of tools to order the world of information.

Edward Wilson-Lee’s biography of Hernando Colón, ‘The Catalogue of Shipwrecked Books’ will be published by HarperCollins in 2018, and the study of the library, co-authored with José María Pérez Fernández, will be published later by Yale University Press.