The Life and Death of the Queen Bumblebee

The Cambridge Animal Alphabet series celebrates Cambridge's connections with animals through literature, art, science and society. Here, Q is for Queen Bumblebee, one of the UK's 1,500 species of wild pollinators that play a vital role in the environment and food production.

Each autumn, colonies of bumblebees die. All, that is, apart from the gravid (egg-carrying) queens who survive the winter in tiny burrows in the ground.  Early in the spring, the queen emerges to start making a nest in which to lay her eggs. To do so, she needs the energy provided by nectar and pollen. If she can’t find enough flowers from which to gather these resources, she will die – and the next generation she is carrying will die too.

Bumblebees are among the UK’s estimated 1,500 species of wild pollinators and play a vital role in the environment. They transfer pollen from plant to plant – and thus ensure that plants reproduce. An estimated 75% of the crops we eat depend on pollination. Bumblebees are particularly important pollinators of beans, raspberries and tomatoes. Uniquely, they are capable of ‘buzz pollination’, producing a high-pitched buzz which releases pollen from pollen-containing tubes inside some flowers. Tomatoes are pollinated like this.

Over the past 80 years or so, there has been a dramatic decline in the distributions of some bumblebee species. Two of the 26 species of bumblebee once common in the UK are now extinct. Scientists think that the factors behind this decline are several and interconnected. Most obvious is the loss of wild flower meadows which have disappeared as farming has become more intensive and fields made larger by the removal of hedgerows. Although many British gardens burst with flowers, many of the showy favourites (such as pansies and begonias) produce little pollen or nectar. 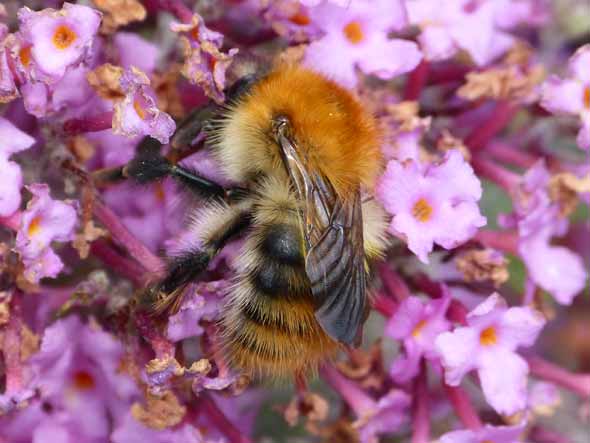 A recent report by Dr Lynn Dicks (Department of Zoology) and staff at Natural England makes an important contribution to the development of nation-wide strategies to halt – and reverse – the loss of wild pollinators such as bumblebees. In 2013, a rare and time-limited opportunity opened up for scientists to contribute to the development of an ‘agri-environment package’ for wild pollinators as part of the new Countryside Stewardship scheme, launched earlier this year.

As an expert in the ecology of flower-visiting insects, Dicks used this ‘policy window’ to bring together a wide range of available information and ask key questions about wild pollinators and their relationship with the farmed environment. In providing tentative answers to these questions, her paper provides ballpark figures on aspects of land management that determine population levels of wild pollinators, including bumblebees, and bolsters arguments for policies that encourage farmers to sow a mix of wild flowers.

“An agri-environment package is a bundle of management options that supply sufficient resources to support a target group of species. Data from a similar package, aimed at helping farmers provide resources for species of birds known to be declining, are not yet publically available. But some of the measures in the package are known to have led to an upturn in numbers of six target species – including skylarks and yellowhammers – which is most encouraging,” says Dicks.

“We depend on pollinators for food production so it’s in our interests to halt drops in numbers. If species are declining, it’s because they lack specific resources – or because other factors are reducing their numbers faster than they can reproduce. Some risks to pollinators – notably pesticides and climate change – are difficult to quantify and politically challenging. An alternative is to focus policy on providing the resources that are lacking – such as nectar-rich flowers.”

The most critical period for bumblebee survival is March and April when the queens that have hibernated over the winter need access to enough nectar and pollen to raise their first batch of workers within an estimated 1km radius of their nests. The first batch of eggs laid by the queen become female workers whose role is to feed the new colony by visiting flowers to gather nectar.  Throughout the summer the queen will produce further batches of eggs, seldom leaving the nest. She will eventually control a nest of as many as 400 individuals, including new queens. Honeybee hives, in comparison, typically contain around 50,000 bees.

Many commercial crops flower several weeks after the queen bumblebees are most in need of nectar. Oil seed rape, for example, produces its bright yellow flowers in May and June. Nectar and pollen provided by these crops are valuable to later batches of bumblebees. However, the first batch of bumblebees relies on plants that flower in early spring – including those associated with rough land (such as comfrey and white deadnettle) and hedgerow species (such as willow, hawthorn and blackthorn). 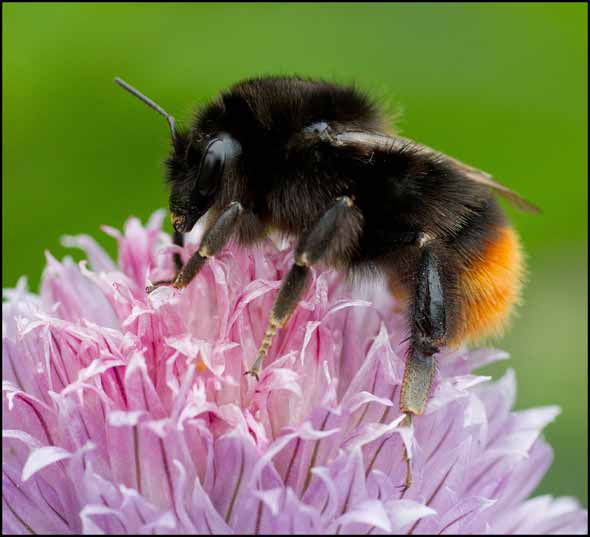 Recent research revealed that wild pollinators provide a much more important service to commercial crops than previously thought. Dicks’ report identifies opportunities for enhancing the environment for six species of wild bee including three species of bumblebee by sowing wild flowers and providing environments for nests.

She compiled and analysed data from a number of wildlife conservation and research organisations, including the Bumblebee Conservation Trust, to build an overall picture of the resources that these insects need to flourish.

By calculating the pollen demands of individual bees, and the resulting demand for flowers, Dicks has come up with some approximate figures in terms of the percentage of land and hedgerow needed to resource a healthy population of selected wild pollinators. Using a 100-hectare block of land as the basis for calculations, she estimates that the provision of a 2% flower-rich habitat and 1km flowering hedgerow will supply the six pollinator species with enough pollen to feed their larvae.

“We suggest that farmers sow headlands, field corners and other areas with mixes that will flower in the summer months, but they also need to manage hedgerows, woodland edges, margins and verges to enhance early and late flowering species and provide nesting and hibernating opportunities,” says Dicks. “It’s really important that the packages offered to farmers through the Countryside Stewardship scheme are easy to implement and well supported by financial incentives and advice. Because we are learning more all the time about the interaction between wild pollinators and the environment, schemes also need to have built-in flexibility.”

Next in the Cambridge Animal Alphabet: R is for an animal that is often found among the pages of children's literature. 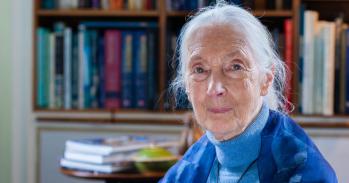 Dr Jane Goodall on the environment: "My greatest hope is our young people"