Of cabbages and cows: increasing agricultural yields in Africa

Africa’s food requirements, along with its population, are growing fast. Three research programmes ask how a better understanding of viruses, parasites and the spread of disease can pave the way to improving agricultural yields.

A good crop can bring in money to buy fertilisers and farm equipment, and also help to pay for healthcare and education for the family

The humble cabbage, universally despised by British schoolchildren, has found unexpected popularity on another continent. But just as the people of Ghana have developed an appetite – and a market – for this leafy green, so too has something else: a virus carried by aphids that causes the cabbages to wilt and die

By contrast, a parasite that emaciates cattle across sub-Saharan Africa has been around for thousands of years but continues to take its toll on certain species of the animals it infects. Prominent ribs are the frequent hallmarks of trypanosomiasis – caused by the presence of a cunning parasite that evades the animal’s immune system by periodically changing its protein ‘coat’.

Meanwhile, farmers in Ethiopia are turning away from the traditional zebu cattle towards breeds that produce greater quantities of milk. As a result they are exposing their herds – and themselves – to increasing levels of tuberculosis (TB) that are brought about by intensified animal husbandry practices.

What links cabbages and cows are three programmes that hope to connect fundamental research with improving farm yields, and in so doing contribute to solving a looming pan-African problem. More than half of global population growth between now and 2050 is expected to occur in Africa. And more people means a requirement for more food.

Ethiopia, for example, has the largest livestock population in Africa but, with a growing population and increasing urbanisation, even its 53 million cattle are not enough. And now efforts to intensify farming in the country are bringing a significant health concern. “The new breeds are more vulnerable than zebu to bovine TB,” explains Professor James Wood from Cambridge’s Department of Veterinary Medicine. “This may have health implications for those who work with and live alongside infected cattle, and also raises concerns about transmission to areas with previously low TB.”

Wood leads a £2.9 million research programme, ETHICOBOTS, which is looking at the feasibility of control strategies, including cattle vaccination. The programme combines partners in eight Ethiopian and UK institutions, and brings together veterinary scientists, epidemiologists, geneticists, immunologists and social scientists. “We need this mix because we are not only asking how effective strategies will be, but also whether farmers will accept them, and what the consequences are for prosperity and wellbeing.”

The difference that increasing productivity can have on farmers’ livelihoods is not lost on an insect expert at the University of Ghana, Dr Ken Fening, who is working on another food-related research project. Cabbages are not indigenous to the continent but have become a major cash crop for Ghanaian farmers and an important source of income for traders to markets and hotels.

“A good crop can bring in money to buy fertilisers and farm equipment, and also help to pay for healthcare and education for the family,” he says. Recently, however, fields of stunted, yellowing, wilting cabbages, their leaves curled and dotted with mould, have become an all too familiar and devastating sight for the farmers of Ghana. 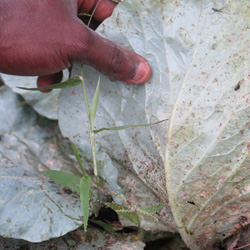 From his field station base in Kpong, Ghana, Fening works closely with smallholder farmers on pest control strategies. Two years ago they started reporting that a new disease was attacking their crops. “It seemed to be associated with massive infestations of pink and green aphids,” says Fening, “and from my studies of the way insects interact with many different vegetables, I’m familiar with the types of damage they can cause.”

Farmers were typically seeing the total loss of their crops and he realised that the devastation couldn’t just be caused by sap-sucking insects. Despite no previous reports of viral diseases affecting cabbage crops in Ghana, the symptoms suggested a viral pathogen.

With funding through the CAPREx programme, Fening began work with Cambridge plant biologist Dr John Carr. The pair collected samples of cabbage plants in Ghana showing signs of disease, and also aphids on the diseased plants. Back in Cambridge, Fening used screening techniques including a type of DNA ‘fingerprinting’ to identify the aphid species, and sophisticated molecular biology methods to try to identify the offending virus.

“Aphids are a common carrier of plant-infecting viruses,” explains Carr, whose research is funded by the Biotechnology and Biological Sciences Research Council as part of the £16 million SCPRID (Sustainable Crop Production Research for International Development) initiative. “The ‘usual suspects’ are turnip mosaic virus and cauliflower mosaic virus, which affect cabbages in Europe and the US.”

“We found that two different species of aphids, pink and green, were generally found on the diseased cabbages,” says Fening. “It turned out this was the first record of the green aphid species, Lipaphis erysimi (Kaltenbach), ever being seen in Ghana.” The pink aphid was identified as Myzus persicae (Sulzer).

What’s more, the virus was not what Carr expected, and work is now ongoing to identify the culprit. The sooner it can be characterised, the sooner sustainable crop protection strategies can be developed to prevent further spread of the disease not only in Ghana, but also in other countries in the region.

Another researcher who hopes that eradication strategies will be the outcome of her research project is Dr Theresa Manful. Like Fening, she is a researcher at the University of Ghana and a CAPREx fellow. She has been working with Cambridge biochemist Professor Mark Carrington on African animal trypanosomiasis. 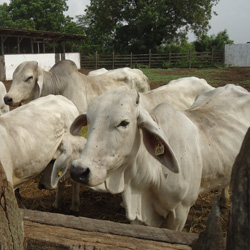 The trypanosome that causes the disease is carried by the tsetse fly, which colonises vast swathes of sub-Saharan Africa. “This is a major constraint to cattle rearing in Africa,” she explains. “Although trypanosomiasis is also a disease of humans, the number of cases is low, and the more serious concerns about the disease relate to the economic impact on agricultural production.”

Carrington has worked for a quarter of a century on the parasite that causes the disease. He understands how the organism evades the immune system of the animal by changing its coat proteins so as to remain ‘invisible’.

“When you first start working on these parasites you are enamoured with the molecular mechanisms, which we now know a huge amount about,” he says. “But then when you look at the effect on large animals like cows you realise that there is almost nothing known about the dynamics of an infection, and even whether an infection acquired at an early age persists for its lifetime.”

Manful and Carrington set about testing herds in Ghana. They discovered that several trypanosome species can be found in the cattle at one time and that nearly all cattle were infected most of the time.

For Manful, one of the important gains has been the ability to expand the research in Ghana: “I now have a fully functional lab and can do DNA extraction and analysis in Ghana – I don’t have to bring samples to Cambridge. We are teaching students from five Ghanaian institutions the diagnostic methods.” She and Carrington have been recently funded through a Royal Society Leverhulme Trust Africa Award to continue their work.

“We want to ensure not only that every harvest is successful, but also that it’s maximally successful.”

ETHICOBOTS is funded under the Zoonoses and Emerging Livestock Systems (ZELS) programme, a research initiative in the UK jointly funded by six research council and government bodies. Dr Ken Fening and Dr Theresa Manful were funded by the Cambridge-Africa Partnership for Research Excellence (CAPREx) and The ALBORADA Trust, through the Cambridge-Africa Programme. 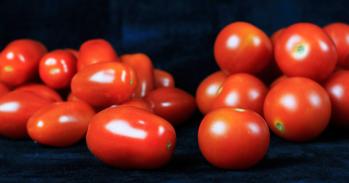