How does your smart city grow?

The Centre for Smart Infrastructure and Construction is building on advances in sensing technology to learn everything possible about a city’s infrastructure – its tunnels, roads, bridges, sewers and power supplies – in order to maintain it and optimise its use for the future.

Infrastructure, both existing and future, is of paramount importance for supporting economic growth and productivity

It can be tough getting people excited about infrastructure because we often don’t notice it until something goes wrong. We expect to turn on the tap and have clean, drinkable water come out. We expect the underground to work. We expect to flick a switch and have the lights come on.

But just think how different expectations were for people living in Victorian London. The ‘Great Stink’ in 1858, caused by untreated human and industrial waste flowing directly into the Thames, led to near-constant cholera outbreaks. Eventually, the smell in the Houses of Parliament became so bad that the windows had to be covered with heavy curtains, which goaded the politicians of the day into action. Engineer Joseph Bazalgette came to the rescue by creating a sewer network for central London, which relieved the city from cholera epidemics.

Fast-forward 150 years, and London, and the rest of the UK, is generally in fairly decent shape infrastructure-wise. However, literal and figurative cracks are rapidly appearing. The London Infrastructure Plan 2050, launched in 2014, states that the capital should be able to accommodate its growth, at least until 2025, within existing boundaries, but estimates that £1.3 trillion will need to be invested in the city’s infrastructure between 2014 and 2050, an amount more than half of the UK’s current GDP.

“Infrastructure, both existing and future, is of paramount importance for supporting economic growth and productivity – and so we must anticipate and plan effectively for the changing needs of society,” says Professor Lord Robert Mair of Cambridge’s Department of Engineering.

“We can’t just build our way out of this – we simply don’t have enough space,” adds Dr Jennifer Schooling, Director of the Cambridge Centre for Smart Infrastructure and Construction (CSIC). “We have to use the existing infrastructure we’ve got and get more and more out of it, and when it’s appropriate, we can build new infrastructure alongside that.”

CSIC, an Innovation and Knowledge Centre jointly funded by the Engineering and Physical Sciences Research Council and Innovate UK, works to bridge the gap between University research and industry in the area of ‘smart’ infrastructure.

Thanks to technological advances over the past two decades, sensors can now be embedded directly into the fabric of our cities, providing valuable information about the ‘health’ of a particular road, tunnel, bridge, building, or any other piece of infrastructure. This information can help identify problems before they become serious, and help get the most out of existing infrastructure, which is particularly important in a small, crowded country like the UK.

CSIC works with different companies and organisations throughout the complex infrastructure supply chain: from owners and operators, designers and builders, to contractors and maintenance personnel, helping them maximise the potential of sensing technology and, by extension, that of the infrastructure we rely on every day.

Since it was founded in 2011, CSIC has built up a network of more than 40 industry partners, including some of the biggest companies in the construction industry, including Laing O’Rourke, Arup and Atkins. It has also worked on some of the largest infrastructure projects in the UK, such as Crossrail and the National Grid power tunnels.

“Because the construction industry is judged on reliability and safety, it is a conservative one, and so we have to really demonstrate our technologies and approaches, to show that they work,” says Schooling. “A conservative industry finds it difficult to grab hold of complex projects, and so we’ve worked really hard to develop consistent methodologies so that we can train industry to use the technologies we’ve developed.”

One of CSIC’s major industry partners, the construction and development company Skanska, has recently established their own company that will make CSIC-developed technology available commercially, after having successfully used it on a project they recently undertook in London. The company was demolishing a 12-storey building to replace it with a 16-storey building in central London, on top of a complex subterranean web of tunnels, transport, foundations, sewers and more.

Skanska worked with CSIC to embed fibre optics in the building pile foundations before it was demolished to determine whether the existing piles could be used again or had to be completely replaced to support the new building. The fibre optic data showed that the foundations did not have to be completely replaced, as is common practice, which not only saved the company £6 million and six months in added project time, but also won the company a sustainability prize for avoiding pouring the massive amounts of concrete required for completely new piled foundations. 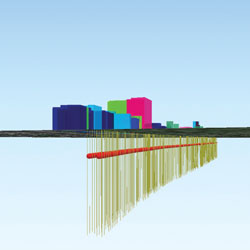 Another CSIC project maximising the value of existing infrastructure is one that is looking to extract the heat from the London Underground to heat and cool the buildings above it. Researchers in Dr Ruchi Choudhary’s group in the Department of Engineering are modelling the amount of heat that can be extracted from the Tube, how many buildings can be heated or cooled, and how that might be affected by future climate change. These geothermal systems offer a potential energy-efficient cooling solution compared with energy-intensive conventional cooling.

“A city’s infrastructure generates many waste streams: the heat generated in the London Underground is a classic example, leading to severely overheated Tube stations,” says Choudhary. “Simulation models allow us to quantify the waste energy that can be usefully harnessed through geothermal boreholes, which makes it possible to demonstrate feasibility and the benefits of operating our infrastructure in more synergistic ways.”

“If there’s one thing we really excel at in this country, it’s making our Victorian infrastructure – such as that designed by Joseph Bazalgette – work well,” adds Schooling. “We need to think about the value that infrastructure brings to our cities, which will help us figure out where and when we should be making new investments, and what impact that will have on a city. If we really understand our infrastructure through data, there’s a huge opportunity to really make a difference to how our cities perform in the future.”

Adds Mair: “Our cities will define the future of society, and smart city infrastructure equipped with modern sensors is essential to achieve the required transformational impact.”